Lawrence Okolie believes that a KO win against Wadi Camacho is a 'formality' when the fierce London Cruiserweight rivals clash at the Copper Box Arena this Saturday with the British and Commonwealth titles on the line, live on Sky Sports in the UK and DAZN in the US.

'The Sauce' returned to his destructive form with a third-round stoppage win over Tamas Lodi last time out at The O2 and the Hackney man, who took criticism from some for messy performances against Isaac Chamberlain and Matty Askin last year, is promising another big KO win to reclaim his Commonwealth crown in East London. 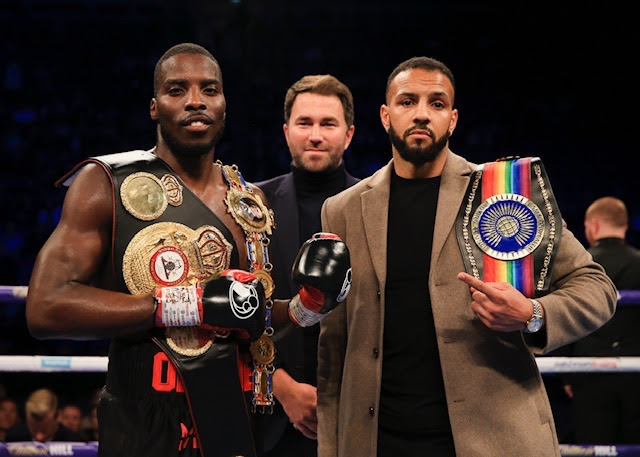 "I think stopping Wadi is a formality for me," said Okolie. "He's got the sort of style that will leave him open to me knocking him out. When it comes down to his skill against my skill, Wadi isn't on my level, or on the level of the people that I've already beaten in the amateurs or the pros. I'm taller than him and I hit harder than him. If you break Wadi down as a fighter, I can see many different ways in which I beat him. This fight will definitely end in a knockout.

"He’s a southpaw but he’s also aggressive. An aggressive southpaw in against someone that is taller than them won't end well. If he goes on the backfoot, he’s not as athletic as me with his footwork, so I’ll be able to get in and out of range a lot quicker than him. He likes to throw a lot of punches which gives opportunities for counterpunching. If I hit him with a shot that he doesn’t see coming, that’ll be a big problem for him.

"With Wadi being a southpaw, it's very good practice for stepping up to the Lebedevs and other World level guys. I'm not overlooking Wadi, I've trained extremely hard for him and I'll deal with him accordingly. On Saturday I'll show him and all of the other Cruiserweights in Britain what I'm about. I want to finish Wadi in a more systematic way - maybe go in southpaw and practice different pattern movements. I want to go in there and show him that he's a practice fight for me as opposed to a 50-50 fight."

Fuk Lawrence Okolie. That performance against Matty Askin was a disgrace, probably one of the worst fights I've ever seen.

Probably half asleep when he said that.

I go to sleep merely watching his fights....

Alright boys, get the jokes in.. I wonder if Okolie realises what he's saying?