Hall of Famer and former HBO Boxing analyst, Larry Merchant, was ringside on Saturday night to watch Mexican superstar Canelo Alvarez score an eleventh round knockout of Sergey Kovalev to capture the WBO light heavyweight title at the MGM Grand in Las Vegas.

Kovalev boxed very well by using his jab throughout the contest, as he prevented Canelo from landing too many punches and blocked his attempts to get inside to connect with combinations to the body.

By in the second half of the fight, Kovalev began to slow down and found himself more vulnerable to Canelo's attacks. During the eleventh, Canelo landed a two punch combination that knocked Kovalev out against the ropes. 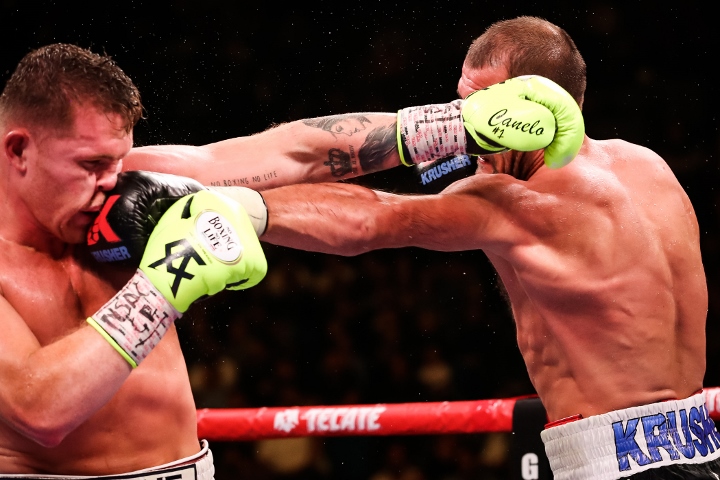 After the fight, Kovalev admitted that he was tired after the conclusion of the sixth round.

"I think a lot of people, myself included, thought that Canelo would get to him late. But the air seemed to come out of Kovalev rather suddenly. He was in complete control or mostly in control and then suddenly he was pawing with his punches and being more concerned about defending himself than hitting the other guy first," Merchant told BoxingScene.com.

"I didn't know if that was enough for Canelo to take advantage of, I didn't see it coming but suddenly late in the round there was a very tired fighter in front of him and to his credit he saw it and he seized the moment."

Now with a world title around his waist, Canelo has expressed interest in another light heavyweight contest.

But, Merchant believes the Mexican star looked "vulnerable" against a much bigger fighter. He would advise Canelo to stay away from top light heavyweight fighters like Dmitry Bivol, Artur Beterbiev and Gilberto Ramirez - who are younger and much fresher than Kovalev.

"I think he found that Kovalev, who has real boxing skills but is known for his power or was known, that he couldn't get in on him for six to eight rounds, that he couldn't deliver more than one punch at a time, and that Kovalev was being smart and using his height advantage. He was fighting a legitimate big light heavyweight, who might have been 190-pounds coming into the ring. Try as he would, he couldn't get in there. He put in a little more pressure in the second half of the fight and hit one out of the park," Merchant explained.

"I think there are some really good light heavyweights out there, I don't know which one of them is the best and I don't think Canelo would be well advised to find out in the ring either."

I don't think Canelo loses to Beterbiev or Bivol. One is very slow and throws 1 at a time. The other fights with some pace but his technique is questionable. He might have more problems with Bivol than Beterbiev but…

Merchant's in the HOF? What weight he fight at? :boxing:

Zurdo would expose and ruin Canelo! I wish that fight would happen. Rameriz deserves the oppertunity but Canelo's team will duck that and for some reason TR keeps their best fighter behind closed doors.

First time in a long time Merchant is 100% correct!