Lara: My Team Reached Out To Hurd For Rematch, He Said No

Of the three losses on his record, Erislandy Lara only has a realistic shot at trying to avenge one.

When that fight happens, he insists, will depend on whenever Jarrett Hurd is game for the cause.

The 37-year old Cuban southpaw returns to the ring this weekend, facing Greg Vendetti (22-3-1, 10KOs) atop a PBC on Fox telecast live from Microsoft Theater in Los Angeles (Saturday, 8:00pm ET). For Lara, it’s the first defense of the secondary version of the WBA 154-pound title he claimed in a 2nd round knockout of Ramon Alvarez exactly 52 weeks prior—also on Fox, live from Minneapolis, Minnesota. 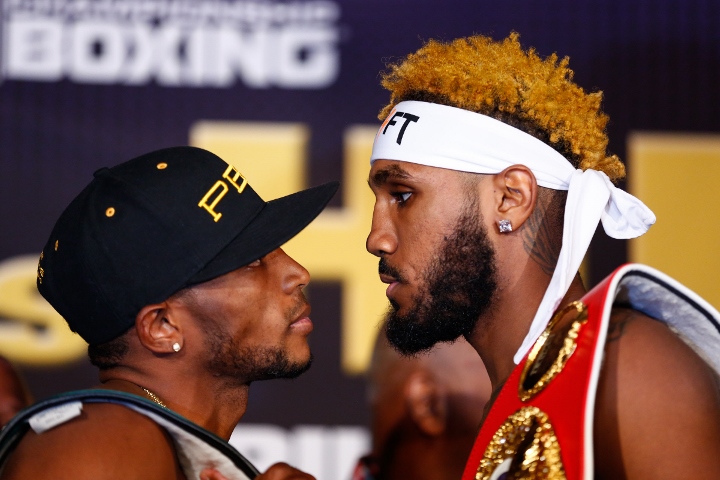 The win was the first for Lara since a 12-round nod over Terrell Guasha in October 2017, marking the fifth and final title defense of his WBA junior middleweight title reign which ended in a heartbreaking split decision loss to Hurd (24-1, 16KOs) in their Fight of the Year-level war in April 2018. The fight left Hurd with the WBA, IBF and IBO titles, and Lara eager for a rematch.

More than two years later, that feeling has not changed one bit, nor—he claims—has the stance taken from the other side.

“My team have reached out to Hurd for a rematch and he said no,” Lara claimed during a recent media conference call to otherwise discuss his bout with Vendetti.

An inquiry placed to Hurd through his team by BoxingScene.com seeking comment went unreturned as this goes to publish. The former unified titlist—who suffered his career lone loss to Julian ‘J-Rock’ Williams last May—did claim shortly after his fight with Lara that he wasn’t particularly interested in a part two or even sticking around at the junior middleweight division.

For now, the latter part has at least changed as Hurd remains put at the weight and still awaiting his next ring assignment.

Lara is good enough with the fight in front of him for now, but at some point would like to avenge some of the blemishes on his record. Lara suffered a highly questionable 12-round loss to Paul Williams in July 2011, a verdict so poorly received that it resulted in the suspension of all three judges. A rematch will never happen for obvious reasons, as Williams remains paralyzed from near life-threatening injuries sustained in May 2012 motorcycle accident.

The closest that Lara will likely ever get to avenging his July 2014 split decision defeat to Saul ‘Canelo’ Alvarez was the knockout win he scored over Canelo’s brother, Ramon last August. The global superstar from Guadalajara is eyeing a super middleweight bout for his next fight, while Lara has remained at junior middleweight his entire 12-year career.

That only leaves Hurd, with the offer still on the table in the absence of getting a shot at the winner of the September 26 showdown between Jeison Rosario (20-1-1, 14KOs) and Jermell Charlo (33-1, 17KO) for the lineal championship and the WBC/WBA/IBF junior middleweight titles.

“I am willing and able to fight anywhere, anytime against anyone in the division to become the best in the world,” Lara insists. “Again, we reached out, [Hurd] said no.

“But I am open to a rematch anytime he is up for it and whenever it is possible.”

[QUOTE=garfios;20733830]One of the best JMW of the past 10 years is a clown. I think you are using that term too loosely.[/QUOTE] Nah he’s a clown. He cried for Canelo rematches but never moved up. He cried to want GGG…

[QUOTE=Turpin Kru;20733184]Hurd has no belts. Lara is a clown, headliner for Haymon. He should only be naming Jermell Charlo Rosario winner.[/QUOTE]One of the best JMW of the past 10 years is a clown. I think you are using that term…

At this point of his career, Hurd is all wrong for Lara. He is no longer as fast, young and quick as he used to be or have the power or the legs to keep a guy Hurd size off…

[QUOTE=Satir;20733249]Hurd is actually the first one who tried to fight other 154 champs and unify the division, the others were avoiding each other for years[/QUOTE] Hurd is the reason we never got him vs Charlo.