Lara: Hurd Better Work On Defense Before He Gets Really Hurt

Whether Jarrett Hurd fights Julian Williams or an easier opponent next, Erislandy Lara has some advice for his rival.

Lara told BoxingScene.com that if the former IBF/IBO/WBA 154-pound champion doesn’t tighten his defense, his career at the elite level won’t last long.

The 6-feet-1 Hurd has mostly been able to overcome his defensive deficiencies by overwhelming smaller opponents, but Williams withstood everything Hurd landed, dropped Hurd during the second round and continued drilling Hurd with hard shots throughout their 12-round, 154-pound championship match May 11 in Fairfax, Virginia. 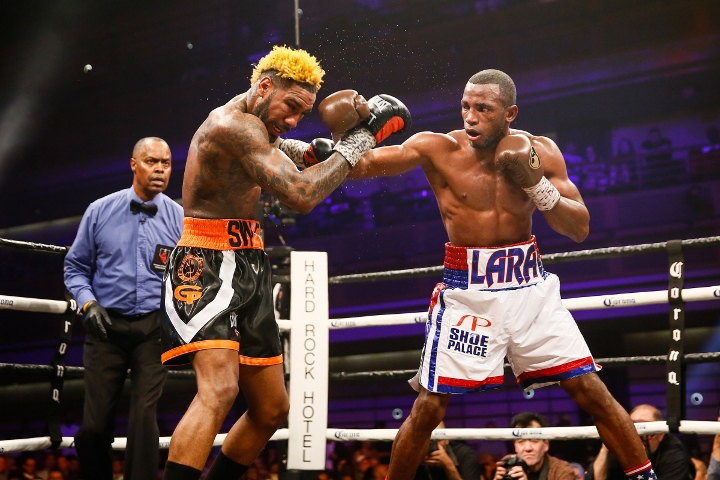 Philadelphia’s Williams (27-1-1, 16 KOs, 1 NC) was a decided underdog, but he beat Hurd (23-1, 16 KOs) by unanimous decision. Two bouts before Williams defeated him, Hurd knocked down Lara in the 12th round and won their title unification fight by split decision in Las Vegas.

“The reality is [Austin] Trout was beating [Hurd],” Lara told BoxingScene.com through a translator. “I beat the sh*t out of him, but he had one knockdown and he got the victory. And Julian Williams looked like he really slammed the door on him. So, he really needs to get back to basics, get his defense right. If he wants to have a long career, the way I have, he’s gotta make a few adjustments. But I wish Jarrett Hurd the best with his career.”

The 36-year-old Lara (26-3-3, 15 KOs), who knocked out Mexico’s Ramon Alvarez (28-8-3, 16 KOs, 1 NC) in the second round Saturday night in Minneapolis, didn’t dismiss the possibility of the 29-year-old Hurd avenging his loss to Williams. An immediate rematch has been discussed for December 14, but an agreement isn’t in place for that fight.

“Any man is beatable,” Lara said. “Anyone can win on any night, if you’re prepared mentally and physically. Now, it’s up to his team as to whether they wanna put him in another grueling fight after fighting me and Julian Williams, all these tough fights. If he wants to go back in it, that’s up to him. But I suggest the kid goes back to the drawing board, works on his defense and maybe takes a few fights in between, before he gets himself really hurt.”

Yeah, Hurd's the type of guy I see not having a long career, or kinda getting distracted ala Keith Thurman. He's a smart guy, about to get married, and seems to not need to box to be happy. A guy…

Lara is boring fighter and jealous of Hurds style because that's what fans enjoy watching.

Lara is right. Im a fan of Jarrett Hurd but he's definitely taken a lot of punishment in his fights over the last 3 years. Even Jason Wellborn was putting it on him before Hurd knocked him out. He's been…

[QUOTE=Bronx23;20036766]Hurd already sounds punchy I fear for his health if he ever fights the heavy hitters of 160. I suspect that he'll be moving up in the near future. He just too damn big for 154. His days of beating…

Hurd already sounds punchy I fear for his health if he ever fights the heavy hitters of 160. I suspect that he'll be moving up in the near future. He just too damn big for 154. His days of beating…