Hiroti Kyoguchi made headlines for all the right reasons in his title winning effort the last time he stepped into the ring.

The lack of action in his first fight as a defending champ will fortunately get buried under the the media attention that will come from the history created in the evening's main event.

Japan's Kyoguchi registered the first defense of his 108-pound title in a slow-paced 12-round decision over Thailand's Tanawat Nakoon in a battle of unbeaten junior flyweights Wednesday evening at Makuhari Messe in Chiba, Japan.

Scores were 117-111 (twice) and 117-112 in favor of Kyoguchi, who fought in supporting capacity to countryman and stablemate Kazuto Ioka, who stopped Aston Palicte in 10 rounds to become Japan's first-ever four-division titlist. 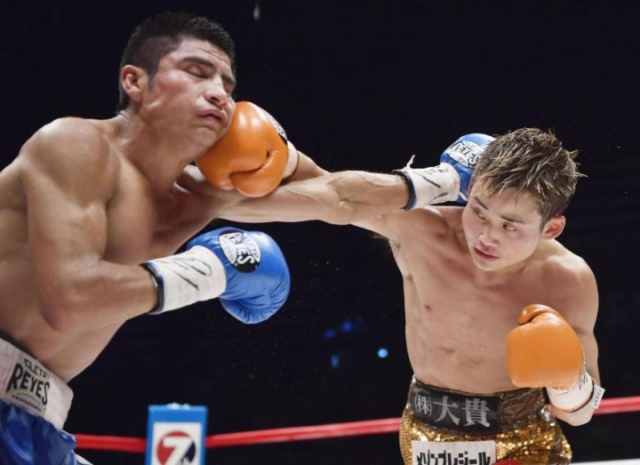 Kyoguchi (13--0, 9KOs) could one day etch his name in Japan's history books, and has certainly enjoyed far memorable nights than what came of Wednesday's title defense. He entered the ring on the heels of the biggest win of his career to date, a stunning 10th round stoppage of Hekkie Budler to win the junior flyweight title last New Year's Eve in Macao, China. The win came on the same night that Ioka fell just short in his efforts to rewrite the record books, dropping a split decision to Donnie Nietes for the same title he ultimately claimed on Wednesday.

Such a day could perhaps come for Kyoguchi, who—with the aforementioned knockout win over Budler—became a two-division titlist after just 12 pro fights. He claimed a strawweight title in his eighth pro fight, scoring a competitive but clean win over Jose Argumedo in Aug. 2017, following up the feat with his first suggestion of a rising star on the horizon in a one-sided eight-round massacre of former champ Carlos Buitrago on New Year's Eve 2017.

Not every win will serve as a time-capsule moment, as he learned on Wednesday versus Nakoon (11-1, 5KOs), who didn't at all seem prepared for his first career title fight. The bout was also his first outside of his native Thailand, but doing little in his road appearance to suggest he deserved the win or even belonged at this level. Action was sorely lacking, as was a second gear as both boxers seemed to content with simply putting in 12 rounds and moving on to the next affair.

For Kyoguchi, there couldn't be a clearer path for a big next step. Countryman and fellow junior flyweight titlist Ken Shiro will attempt the sixth defense of his version of the divisional crown versus Jonathan Taconing this July in Osaka, Japan. A unification bout between the two wouldn't just be a huge event in Japan, but would also provide clarity at the top as such a fight would serve as the lineal championship between the two highest-rated junior flyweights in the world.

Right behind them are fellow titlists Felix Alvarado and unbeaten Carlos Canizales, both of whom are coming off of successful title defenses in back-to-back weekends in May.

There is plenty of opportunity for big moments to come for Kyoguchi. It just didn't happen on Wednesday, although he still remains unbeaten and with title in tow.

Also on the show, Japan's Miyo Yoshida (13-1, 0KOs) claimed her first major title, winning a vacant junior flyweight belt in a 10-round decision over California's Casey Morton (8-2-3, 1KO). Scores were 100-90 twice and 99-91 in favor of Yoshida who wins her ninth straight while also going 10 rounds for the first time in her career.

Good job by Satanmuanglek, he will easily be champion in time.