This time, two judges scored it for KSI.

The two points referee Jack Reiss took from Paul in the fourth round were the difference between Paul winning and losing because it changed the outcome on Moret’s scorecard. Had Reiss deducted just one point from Paul, their rematch would’ve resulted in a split draw because Moret would’ve had it even (56-56).

“I’m coming for the commission on that,” Paul said. “I don’t think that was fair at all.”

KSI contended that he should’ve been credited with a knockdown in the third round.

The much-anticipated rematch between the 26-year-old KSI (1-0) – a Watford, England, native whose real name is Olajide Olatunji – and the 24-year-old Paul (0-1), of Westlake, Ohio, drew a large crowd to Staples Center. 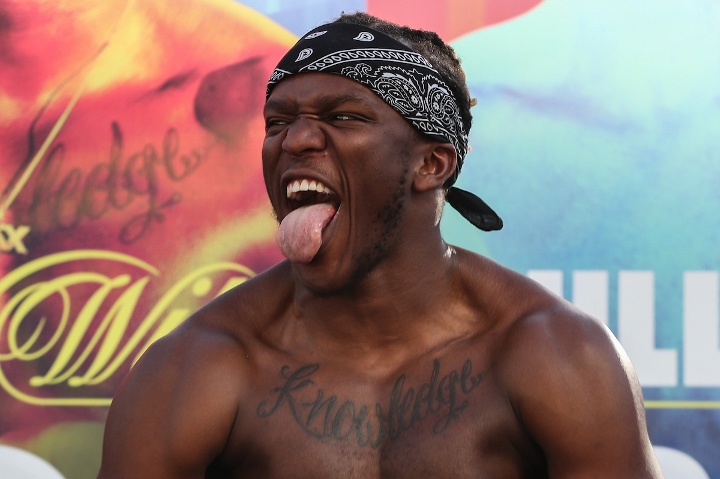 The CSAC sanctioned their six-round rematch as an official professional boxing match, the pro debut for these popular YouTube sensations. Their first fight, a six-round amateur match, resulted in a majority draw 14 months ago at Manchester Arena in Manchester, England.

On Saturday night, KSI landed a right hand with just under a minute to go in the sixth round. Both boxers spent most of those final three minutes swinging and missing, though.

A right-left combination by KSI caught Paul while he was moving backward with just over 40 seconds to go in the fifth round. Paul’s jab was his most effective weapon in that fifth round.

Paul rocked KSI with a right uppercut in the final minute of the fourth round. He landed another right uppercut, but he held KSI behind his head when he landed that shot.

Paul then hit KSI with a right hand to the back of his head when he was down. Reiss gave KSI time to recover with 42 seconds remaining in the fourth round and deducted two points from Paul.

KSI said it took “about a minute or two” to recover from Paul’s vicious uppercut and came back from that trouble to fight well in the fifth and sixth rounds.

“I’m a dog,” KSI said. “I keep saying it. And yeah, he hit me hard there. And then, he just hit me in the back of the head as well. And it was just – I don’t know, it was outrageous. But it is what it is. … Your boy’s victorious. Your boy’s happy. Happy days.”

KSI landed a right hand to the back side of Paul’s head that sent him to the canvas at the midway mark of the third round. Reiss ruled, however, that it wasn’t a knockdown because KSI hit Paul behind his head.

KSI hit Paul with a right-left combination with just under 30 seconds to go in the third round. Paul fell to the canvas again just before the third round concluded, but he clearly slipped on the canvas.

Paul also landed several jabs during the second round.

KSI threw a hard right hand about 15 seconds into the bout, but Paul slipped it. KSI threw another right-handed haymaker at about the midway mark and initiated a clinch after it missed.

A counter left hook by Paul connected with about 30 seconds to go in the opening round.

In the bout before the Paul-KSI rematch, undefeated middleweight prospect Nikita Ababiy beat Jonathan Batista by disqualification after the first round.

Referee Ray Corona disqualified Batista for trying to hit Ababiy more than once after the bell sounded to end the opening round. Brooklyn’s Ababiy (8-0, 6 KOs) dropped Santiago in the first round, but he also fouled the Dominican veteran and had a point deducted by Corona.

The veteran referee warned Batista about retaliating once Batista was given time to recover after Ababiy hit him behind his head and sent him to the canvas a second time. Batista (19-16, 12 KOs) ignored Corona’s instructions, which led to the disqualification in a super middleweight match that was scheduled for four rounds.

Lennox did it (held and hit) and not even a warning, just sayin lol

[QUOTE=JLC;20181902]I agree ! The first upper was the most damaging, but he did stay up from it long enough to get hit by the illegal shot. I think had he not held and hit, it’s possible that he still got…

It was honestly a pretty good scrap. I can't take it away from them even tho I wanted too :lol1:

[QUOTE=BodiesInFlight;20181849]Has the highest post count in the thread but didn't even want to watch any of it :lol1:[/QUOTE] Oh I watched, and most of my posts were *****ing lol. Planned to watch just the Saunders match and Haney match, but…