NEW YORK – Adam Kownacki’s manager was so impressed by how his boxer blew out Gerald Washington, Keith Connolly is convinced Kownacki can beat the first fighter that stopped Washington.

If all goes according to the plan designed by Connolly and Kownacki, the popular Polish heavyweight contender will get his chance to prove he can knock out Deontay Wilder by the end of this year. Kownacki, 29, figures to fight again during the summer, which would place him and Wilder on a comparable schedule.

Wilder would have to defeat Tyson Fury in their immediate rematch, which should take place in May or June, for Kownacki (19-0, 15 KOs) to have a chance to challenge the unbeaten knockout artist. Connolly is certain a Wilder-Kownacki clash would sell out Barclays Center in Brooklyn, where Kownacki was raised.

“The more I see Adam fight, the more I’m convinced he can beat Deontay Wilder,” Connolly said during a post-fight press conference Saturday night. “Stylistically, Deontay needs a lot of distance to get that big right hand off. And I think Adam’s gonna be in his chest the whole night, and I don’t think Deontay could survive that. He was in big trouble against Luis Ortiz, and Luis Ortiz doesn’t throw nearly the amount of punches as Adam.

“So, I think he’s grown a lot here in the last year. I think we have one more fight like this and then, you know, the talks I’ve been having is that he would be fighting Deontay Wilder at the end of the year – here, in this building, probably. And I think that would be a surefire sellout, like a real sellout, where every single ticket would be bought.” 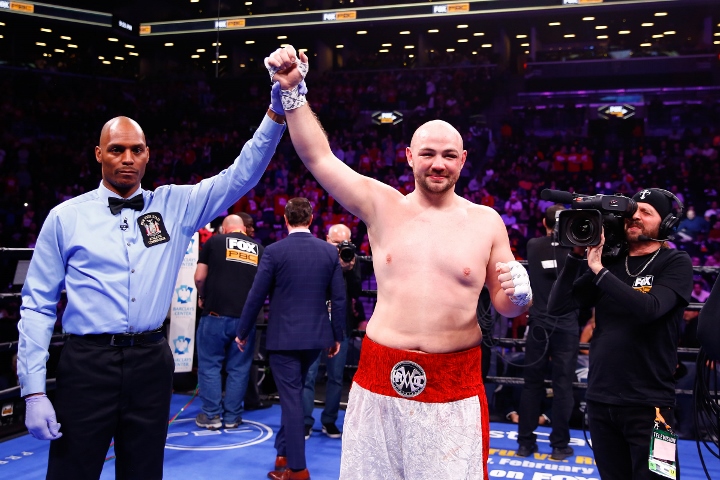 Neither Wilder nor Miller tore through Washington (19-3-1, 12 KOs) the way Kownacki dismantled him, though.

Kownacki pounced on the former USC football player as soon as the opening bell sounded at Barclays Center. The 6-feet-3, 258-pound Kownacki never stopped throwing punches, knocked down the 6-feet-6, 243-pound Washington with a right hand early in the second round and stopped him 1:09 into that round.

The emerging Kownacki has stopped Artur Szpilka and Iago Kiladze, out-pointed former IBF champ Charles Martin in an action-packed 10-rounder and overwhelmed Washington in his past four fights.

“I think tonight was not a good performance, not a great performance – I think this was a star-making performance,” Connolly said. “He was supposed to beat Gerald Washington, but it was the way he actually beat him. He went in there and destroyed him. I don’t know what the punch stats were, but I’ve never seen a big heavyweight throw that many punches in a round-and-a-half. It was incredible. He never took his foot off the pedal. Even in the second round, when Washington came out and threw about 15, 20 really hard punches, to try to put himself back in the fight, Adam ate those things for breakfast, and then just destroyed him and walked through him.”

Breazele would get **** on against Wilder

[QUOTE=REDEEMER;19469900]Hopefully the corrupt WBC doesn't try and evade Breazeale if Wilder gets by Fury. They know the 6'7 giant is more threat to Wilder then the short less powerful Kownacki. People are clamouring Kownacki now but call Breazeale a bum…

[QUOTE=REDEEMER;19469900]Hopefully the corrupt WBC doesn't try and evade Breazeale if Wilder gets by Fury. They know the 6'7 giant is more threat to Wilder then the short less powerful Kownacki. People are clamouring Kownacki now but call Breazeale a bum…

His head movement is abysmal and he would be there for that straight right all night. His grit would have me worried he could be seriously hurt as he seems like a real nice guy who is becoming a father.