There’s a reason Adam Kownacki has performed at Barclays Center almost as many times as Jay-Z.

Yes, he has legions of Polish fans who buy tickets to his fights, but not every high-level Polish fighter can headline one of the United States’ major venues. Kownacki can because he’s exciting, and in boxing, unless you’re scoring sensational first round knockouts, being exciting is a synonym for being vulnerable. To be exciting, you have to hit, but also get hit back, and getting hit back means you might get knocked out.

That finally happened to Kownacki on Saturday night in Brooklyn, as the 30-year old contender was stopped by veteran Robert Helenius in the fourth round of their FOX-headlining bout presented by Premier Boxing Champions.

The bout will inevitably wind up on Upset of the Year shortlists come late-December, and understandably so. Helenius was a colossal underdog, with Kownacki being listed as a -3000 favorite in some places online. “Babyface” was being positioned as one of the heavyweight division’s next stars, and his handlers cleverly finagled this bout against a supposed shopworn vet to be an eliminator for the WBA heavyweight title. On paper it was as simple as passing go and collecting the cash as Kownacki was to loop around for a potential crack at the winner of Anthony Joshua-Kubrat Pulev.

But how shocking should it have been? Kownacki was coming off, statistically, one of the most brutal heayyweight fights in history against Chris Arreola, a fact forgotten likely because the scores were 118-110, 117-111, 117-111 in favor of Kownacki. The scores were indeed fair, because Kownacki landed 369 punches. However, to do that, he also absorbed 298 shots from Arreola. The two combined to land a CompuBox heavyweight record 667 punches and combined to throw a CompuBox heavyweight record 2172 punches.

The fight maybe didn’t seem as brutal as it actually was. I recall watching the fight with a friend who is an enthusiastic but not die-hard boxing fan, and during the fight he scoffed and said “ah they’re not even hurting one another.” And in a sense, he was right. Neither man was wobbled or showing visual signs of distress outside of the requisite blood—within the confines of boxing, this appeared normal. For an Adam Kownacki fight, it seemed especially normal. But it’s easy to ignore or just forget the toll fights like that take on the combatants.

When it comes to action warriors like Kownacki, we simultaneously enjoy the vulnerability they display in getting hit, and also trick ourselves into thinking they’re impervious to the damage. But is it really a coincidence that one fight after getting belted nearly 300 times by a big heavyweight puncher, Kownacki suddenly couldn’t weather the storm anymore? 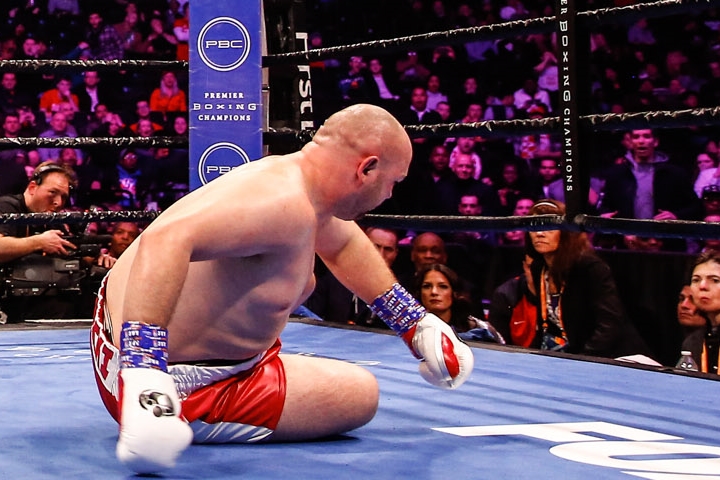 Fights like Kownacki-Arreola often spell the beginning of the end for fighters, even the winners. A year after his CompuBox-busting war with Ray Oliveira, Zack Padilla was out of boxing after an injury sustained in, of all things, sparring. One fight after his record-breaking battle with Nathan Cleverly, Andrzej Fonfara, another iron-chinned Polish battler, was knocked out in one round by Joe Smith Jr.

Like Padilla and Fonfara, even in the fights that were “easy” for Kownacki, he was still walking face-first into punches, he just happened to throw more than any heavyweight in recent history. In fact, heading into the Helenius fight, Kownacki averaged 74 punches per round, which was more than every championship-level fighter other than Roman Gonzalez and Leo Santa Cruz.

Kownacki has made his bones in the toughest manner possible, but now it’s fair to ask if he’s given all he has to give.

If he’s looking for hope for a career revival after this however, he should look no further than his conqueror, Helenius. “The Nordic Nightmare” has been knocked out twice, once by Johann Duhaupas in 2016, and more recently by Gerald Washington in July of 2019. In between his losses (he also dropped a 2017 decision to Dillian Whyte), he took some easier fights—a European journeyman here, a Finnish novice there. The kinds of fights we malign fighters for taking, but ultimately, the ones that elongate their careers.

“I've done this for 20 years. And I think I finally found a way to beat the mental barriers that I put on myself,” Helenius told reporters in the Barclays Center hallway after the bout.

There’s a reason that volume punching, face-forward brawlers like Kownacki are rare in the heavyweight division. Every trained fighter who weighs more than 200 pounds will do some kind of damage when they hit you. Because of that, the heavyweight division is a long game. It’s true that the top of the heavyweight division currently is occupied by relative youngsters in Tyson Fury and Anthony Joshua, but heavyweight contenders can quite often be in their late 30s and even early 40s. By simply hanging around, you can make a lot of money, such as 36-year old Helenius, who is now in a mandatory position for a potential fight with Joshua, one of the most lucrative spots in the sport.

The perils of tussling with men this size are simply different than they are in lower weight classes. To deal with those rigors, sometimes it requires slowing down, both in your in-ring style and in your fighting schedule. Even in a fight that was less than 12 minutes long, Helenius alluded to the bout’s hardships.

“He's a tough man. At some point, I was like, I'm gonna give everything now, or...you know,” Helenius said as he shrugged, insinuating that “you know” meant something bad like potentially getting hurt himself.

When asked if he would be interested in an immediate rematch with Kownacki, Heleius said “I have to think about it. I have to take a few days off. I've been training like a crazy dog for months. I need a few weeks to just be with the family.”

Moments later, midway through answering a question, Helenius had expended all the energy he had left, and simply said “I need a break,” disappearing into his dressing room.

Perhaps Kownacki needs one too.