Kownacki vs. Helenius is Official, March 7 at Barclays Center

Undefeated Polish star and Brooklyn native Adam Kownacki will headline a night of heavyweight showdowns and look to thrill his hometown crowd when he takes on Robert Helenius in a 12-round WBA Heavyweight Title eliminator headlining FOX PBC Fight Night and on FOX Deportes Saturday, March 7 from Barclays Center, the home of BROOKLYN BOXING™.

The heavyweight action begins at 8 p.m. ET/5 p.m. PT and features heavyweight sensation Efe Ajagba in a 10-round fight in the co-main event, plus rising heavyweight Frank Sánchez steps in to face Philadelphia's Joey Dawejko in a 10-round attraction.

"Heavyweights always bring excitement and on March 7 fans are going to get non-stop hard-hitting action from these fighting giants," said Tom Brown, President of TGB Promotions. "Adam Kownacki has established himself as a fan-favorite at Barclays Center and with each victory he puts himself closer and closer to becoming the first Polish heavyweight champion in history. He'll be given all he can handle by the tough and experienced Robert Helenius. Highly regarded rising contenders Efe Ajagba and Frank Sánchez will share the stage with Kownacki and look to continue to show off their credentials as future heavyweight champions. You're not going to want to blink when these heavyweights step into the ring in primetime on FOX and FOX Deportes." 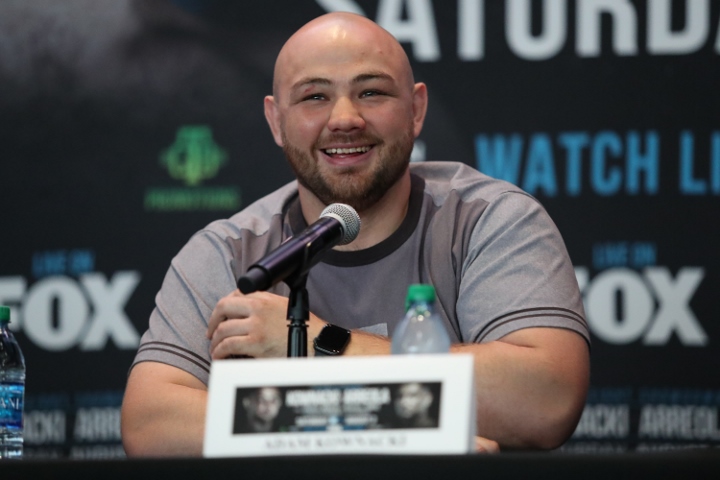 Tickets for the event, which is promoted by TGB Promotions, are on sale now and can be purchased at Ticketmaster.com and barclayscenter.com. Tickets are also available for purchase now at the American Express Box Office at Barclays Center.

Kownacki (20-0, 15 KOs) is noted for his tenacity and has been progressing towards a world title shot with knockouts in five of his last seven fights. The 30-year-old Kownacki, who was born in Lomza, Poland and moved to Brooklyn when he was seven, was an accomplished amateur in New York City before turning pro. He most recently bested veteran contender Chris Arreola in an action-packed fight on FOX in August. His previous two fights had seen him score an impressive unanimous decision victory over former world champion Charles Martin in 2018 and a devastating knockout victory against Gerald Washington in January 2019 on FOX. This will be his fifth straight and tenth overall fight at Barclays Center, where he has routinely brought out the area's passionate Polish sports fans.

A winner in three of his last four fights, Helenius (29-3, 18 KOs) will fight in the U.S. for the second time on March 7, after establishing himself as one of Europe's top heavyweights for several years. Born in Sweden and fighting out of Mariehamn, Finland, Helenius knocked out Erkan Teper in September 2018 to rise up the rankings before dropping his U.S. debut to Gerald Washington in July 2019. Prior to the Washington fight, the 36-year-old had won six of his last seven fights, with his lone blemish coming against Dillian Whyte. He most recently stopped Mateus Roberto Osorio in November 2019.

Nigeria's Ajagba (12-0, 10 KOs) has increased his opposition in his recent fights and passed those tests by getting off the canvas to stop Iago Kiladze in December and defeating fellow 2016 Olympian Ali Eren Demirezen by 10-round unanimous decision in July, both on FOX. The 25-year-old Ajagba gained widespread notoriety in August 2018 when his opponent, Curtis Harper, walked out of the ring after touching gloves to start the first round. Ajagba won the fight without throwing a punch as Harper was disqualified. Living in Stafford, Texas and training with Ronnie Shields, Ajagba will make his 2020 debut and third career appearance at Barclays Center on March 7, after four victories in 2019.

A former amateur standout from Cuba, Sánchez (14-0, 11 KOs) now lives in Miami, trains in San Diego with Eddy Reynoso and is unbeaten since turning pro in 2017. The 27-year-old scored knockouts in his first six pro fights, and picked up nine victories in 2018. In 2019 he added four more triumphs, including three stoppages and his first 10-round victory when he bested Jack Mulowayi in October to win by unanimous decision.

Dawejko (29-7-4, 11 KOs) has been tested against a slew of tough contenders in his career that dates back to 2009. Fighting out of Philadelphia, he has crossed paths with perennial contenders while establishing himself in the heavyweight division. The 29-year-old most recently defeated Rodney Hernandez in July.

Name me.one elite puncher kow has faced ?? The kid is fun but they are clearly saving him for a title shot due to his following . Theres no other explanation. This guy wont be named baby face for long…

Not looking forward to it

When has anyone defeated a top guy to get a Wilder title shot ? Posters complaining better look up his resume ,even the Wilder fans . Fury defeated Wilder and Klitschko ,Wilders defeated no one proven , crying about Kownacki…

After watching this clown play pillow fisted patty cakes with chrissy nips over 12 rounds, I'll pass on watching him again.