Kownacki: A Lot Of Great Fighters Lost, Came Back; I'm About To Do The Same

NEW YORK – The underdog who stopped Adam Kownacki on Saturday night was knocked out seven months before their bout by an opponent Kownacki obliterated earlier in 2019.

Robert Helenius’ comeback from his eighth-round knockout defeat to Gerald Washington is among the things that make Kownacki confident he’ll be able to respond positively to his first defeat. He hopes Helenius gives him an immediate rematch, but because Kownacki isn’t contractually owed a rematch, he might have to oppose someone else whenever he’s ready to fight following his fourth-round, technical-knockout loss at Barclays Center in Brooklyn, Kownacki’s home borough.

Either way, the nature of his first defeat will motivate Kownacki to train harder and attempt to prove people wrong when he returns to the ring.

“I wanna be the best,” Kownacki told a group of reporters after his loss. “That’s my goal, to prove I’m the best fighter. But we have great fighters, like Lennox Lewis, who came back. A lot of great fighters lost and came back, so I’m about to do the same.” 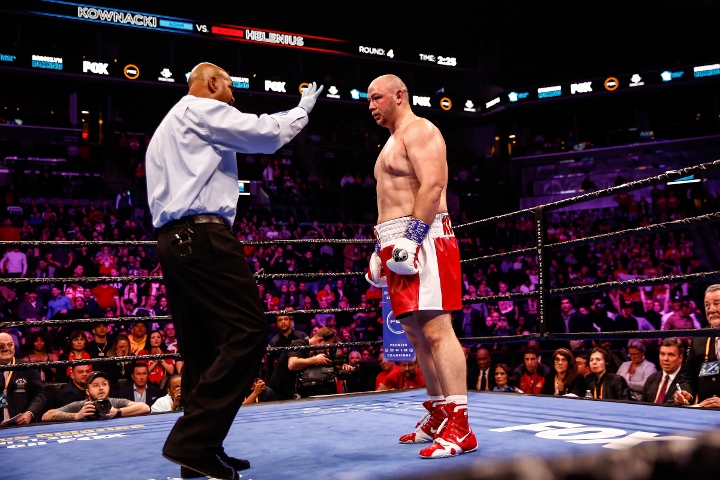 A right-left combination by Helenius knocked Kownacki flat on his back 30 seconds into the fourth round. Just 10 seconds earlier, Helenius’ left-right combination sent Kownacki to one knee.

Referee David Fields missed the punches that caused that first knockdown, however, and didn’t count it. Kownacki was up from the only official knockdown in their fight by the time Fields’ count reached four, yet he couldn’t keep Helenius from unloading a barrage of hard shots on him.

A wobbly, vulnerable Kownacki was backed against the ropes, taking numerous unanswered shots, when Fields understandably stepped between them to halt the action at 1:08 of the fourth round.

“It’s boxing,” Kownacki said. “You’ve gotta be careful at all times. One moment of not being cautious, you get caught with a good shot and the fight changes, especially in the heavyweight division. But it was a learning lesson. I’m still young, still beautiful, so I’ll be back.”

The 36-year-old Helenius (30-3, 19 KOs) wouldn’t commit Saturday night to an immediate rematch with the 30-year-old Kownacki (20-1, 15 KOs). He did mention the possibility of facing Kownacki a second time in Finland, Helenius’ home country.

I, like many others, had my reservations about Kownacki. He was on his way to another victory where he blitzed his opponent early and overwhelmed him. His suspect defense betrayed him and he got caught and stopped. Helenius was the…

Unlike the Americans when they lose...Kownacki has a loyal following so guess what his next fight the Polish Fans will show up at Barclays in full support of their guy wanting to see him bounce back While with Americans, you…

BUMSQUAD Wilder said the same exact thing after losing. Problem is neither one of you _aggots are great

Kownacki is far from a great fighter but he's entertaining and has a big heart.