Viewership figures from Nielsen Media Research revealed Tuesday that a peak audience of 1,769,000 watched Kownacki and Arreola slug it out during the latter portion of a 12-round main event FOX televised from Barclays Center in Brooklyn. The average viewership of that entertaining encounter, which Kownacki won by unanimous decision, was 1,727,000.

The average viewership of the entire three-bout broadcast was 1,301,000. A combined average audience of 1,393,000 viewers watched the show live on FOX, FOX Deportes and FOX Sports Streaming services. 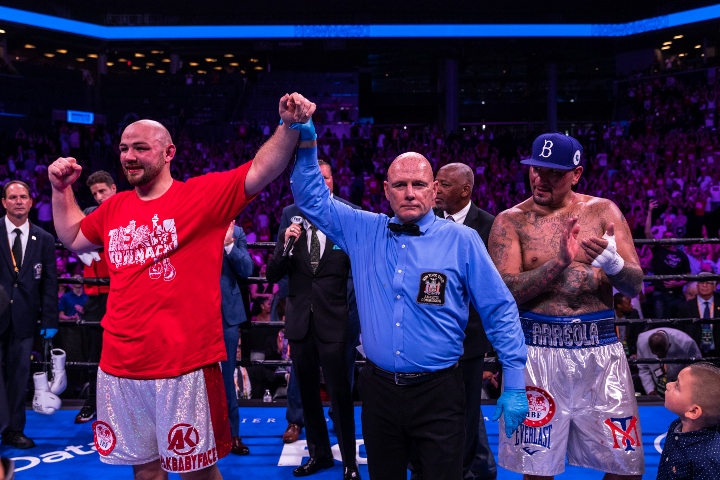 FOX’s tripleheader also included a WBA interim light heavyweight title bout in which Jean Pascal upset Marcus Browne by technical decision, as well as a junior middleweight match in which Wale Omotoso stopped Curtis Stevens in the third round.

Viewership for this show was significantly higher for FOX than the tripleheader the broadcast network aired last August 4.

The main event of that show, which featured Andre Berto’s narrow win over Devon Alexander, drew a peak audience of 1,266,000 and was watched by an average of 1,193,000 viewers. The average audience for FOX’s four-fight broadcast that night was 941,000.

The Berto-Alexander show aired, however, before FOX struck a four-year deal with Al Haymon’s Premier Boxing Champions to pay substantial license fees for its content. Prior to that agreement, which was announced last September 5, Haymon’s PBC bought time on FOX to televise its fights.

Kownacki’s previous performance on FOX, a second-round technical knockout of Gerald Washington on January 26, drew an average of 1,963,000 viewers. Television viewership in January typically is higher than in August, though, which accounts at least in part for the lower viewership.

Good for the sport all around. I don't understand why people hate on the PBC.

That's not the case anymore. The model worked as intended. Haymon didn't go in kissing butt holes. He put up the cash up front.

What's up with these PBC haters? I was happy to tune in for the fights without having to figure out if my ESPN+ app was going to work or not.

That was a great fight! Glad so many people had a chance to enjoy it! Breazeale vs. Ajagba! Make It Happen!