Kovalev's Manager on Training With Buddy McGirt For Alvarez

The decision has been made by former light heavyweight champion, Sergey Kovalev, that when he faces Eleider Alvarez in their rematch in early 2019, that it will be veteran trainer Buddy McGirt preparing him for battle.

Back on August 4th, Alvarez pulled off a big upset when he knocked out Kovalev in seven rounds to capture the WBO world title.

The shocking loss left the 35-year old Kovalev searching for answers about an unsure future. 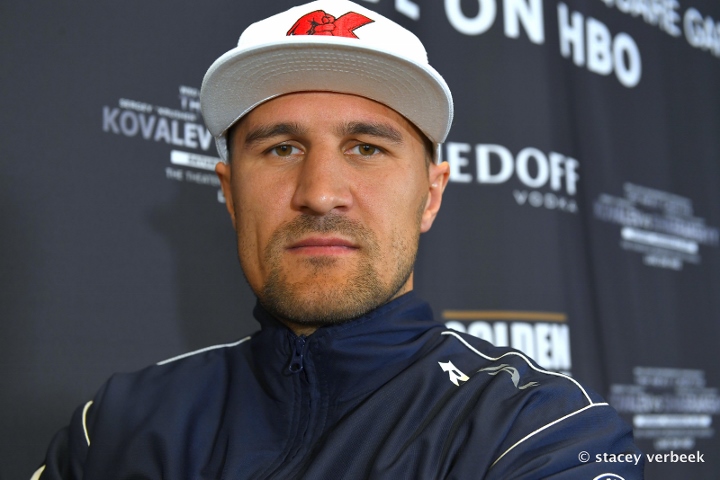 After an acrimonious break-up with long-time trainer, John David Jackson (which occurred after his loss to Andre Ward in June of 2017), Kovalev had gone with a series of relatively unknown crew of trainers in his subsequent fights.

But after the loss to Alvarez, "He was looking for trainers and Buddy came into the picture and he said he wanted to try, he went to Buddy,"explained Egis Klimas, his manager, to BoxingScene.com.

"It's not far away from his house, he trained a couple times and said he liked it, he wants it and they made a decision to work together."

But will the notoriously stubborn Kovalev (32-3-1, 28 KO's) actually listen to McGirt, who has worked with numerous world champions.

Klimas states calmly, "He has no choice now. He has to listen to somebody because the formula that used to work for himself, didn't work."

For Kovalev, who was once considered one of the premiere prizefighters in the world, his career is now at a crossroads.

"Break it or make it, of course it is," agreed Klimas. "He understands that, he's a bright man, he understands what is what. So he has no choice, he has to understand now."

Ward ruined everything for Krusher.... I bet he won’t play guard dog for GGG ever again:lol1:

Exposedalev is just another cuck chump who can't beat a real man....

[QUOTE=Guy3008;19223200]Unfortunately, this will be the end for Kovalev. He is mentally weak at this stage while Alvarez is strong and confident. Buddy McGgirt can't do nothing for him. Kovalev quits after this fight. His loss to Ward has scarred his…

[QUOTE=SugarRaRobinson;19222894]Don’t recall seeing any post about Kov firing the Russian coach, do you ? My point is that, unless I missed it, it’s been quietly swept under the rug.[/QUOTE] Look at the post I quoted. "Buddy needs to teach him…