Kovalev Would’ve Retired Had He Lost To Yarde

There was a lot of external pressure applied on Sergey Kovalev going into his fight against Anthony Yarde.

That mandatory defense of his WBO light heavyweight title took place in Kovalev’s hometown of Chelyabinsk, Russia. And as if impressing his countrymen wasn’t enough to think about, Kovalev had to win to secure an eight-figure payday for a much-discussed showdown with Canelo Alvarez. 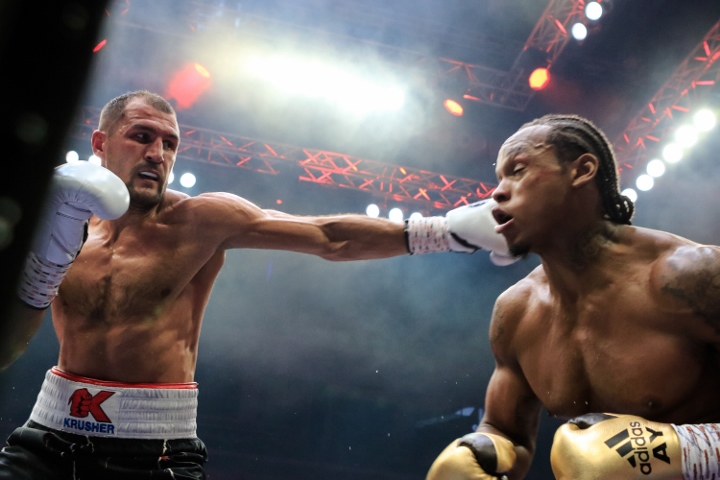 The 36-year-old Kovalev revealed to BoxingScene.com that he had decided he would retire from boxing if Yarde defeated him August 24. His 11th-round knockout of Yarde instead secured his fight against Alvarez on November 2 at MGM Grand Garden Arena in Las Vegas.

“I understood what would happen if I won,” Kovalev said before a press conference Wednesday in Los Angeles. “I understood my career would continue if I won. If I lost, I would’ve stopped my boxing career. I didn’t want to stop my boxing career, and therefore I got the victory.”

Kovalev came back from serious trouble toward the end of the eighth round to knock out England’s Yarde in the 11th round of their scheduled 12-rounder at Traktor Sports Palace. A jarring jab by Kovalev left an exhausted Yarde (18-1, 17 KOs) flat on his back and unable to answer referee Luis Pabon’s count.

Nearly three weeks of ensuing negotiations resulted in Kovalev securing the highest-profile fight of his 10-year pro career versus a Mexican icon commonly considered boxing’s biggest active star. The 29-year-old Alvarez (52-1-2, 35 KOs) will move up two weight classes, from the middleweight limit of 160 to 175 pounds, to challenge Kovalev (34-3-1, 29 KOs).

“I’m very happy to be part of this event,” Kovalev said. “It’s a very exciting fight for me and a very exciting event. When I [first] met Canelo in 2012 in Big Bear [California], I couldn’t have imagined this fight. But now this fight is happening, and this is a huge test for me because he’s a young guy, he’s very talented, very strong, with a high IQ in the ring. It’s a good test and I’ll be ready.”

I don't care is he is cashing out. He has had a good career and deserves the payday. Its a good fight. Kovalev has vulnerabilities but he is still a good boxer with power and a great jab. Canelo is…

Kovalev's definitely sounding like a fighter who's feeling the affects of aging, but still loves the sport. If he loses, or even struggles to win against someone who's naturally a stone lighter and half a foot shorter - no matter…

So now he'll retire when he loses to Canelo.

So , are people still wagering on Kovi Told you all , this is a suckers bet Bookies laughing their azzes off , they gonna make big fughin money with all the nostalgic bettors Canelo destroys him by the 5-6th…