Kovalev: I Feel OK, Going To Hospital To Get Head, Body Checked

ATLANTIC CITY – Sergey Kovalev couldn’t attend a post-fight press conference late Saturday night because he was taken to a local hospital for observation.

Kovalev made sure, though, to assure his fans that he is OK after suffering three knockdowns and a brutal seventh-round knockout against Eleider Alvarez at Hard Rock Hotel & Casino’s Etess Arena.

“I am on my way to the hospital to check my head, check my body,” Kovalev said during a video posted to his Instagram account from Atlantic City Regional Medical Center. “I feel OK. Thank you, everyone. Thank you very much to all the fans around the world for your support. I love you, and I’m fine.” 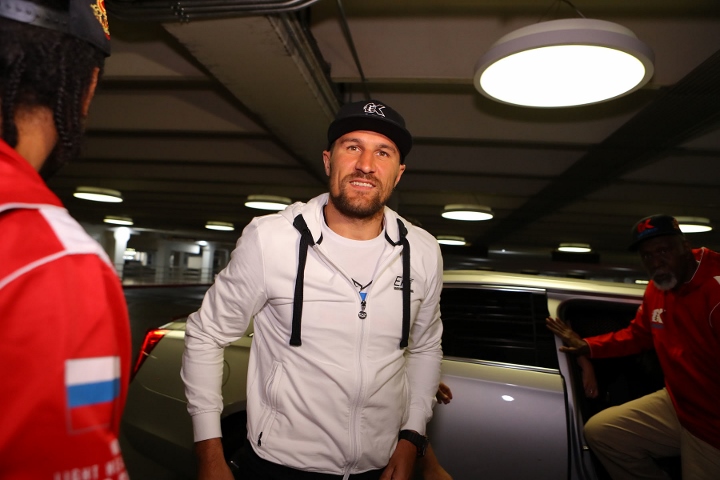 Unlike Kovalev’s controversial TKO defeat to Andre Ward in their rematch in June 2017, there was nothing debatable about this devastating defeat. His second loss to Ward was questionable because Ward landed multiple low blows before referee Tony Weeks ended their second fight in the eighth round at Mandalay Bay Events Center in Las Vegas.

Alvarez is contractually committed to an immediate rematch with Kovalev. Kathy Duva, whose company promotes Kovalev, stated during the post-fight press conference that she’s not sure when the rematch will take place.

[QUOTE=Nilus99;18997970]Kovalev is wild in his style of boxing and he seem to have problem with technical fighter... ward showed it and alvarez who have a ok/good power but not great has caused real trouble to Kovalev because of his technical…

[QUOTE=Corelone;18997852]I don't think he knows any French at all. That was just a personal message and you bit hard.[/QUOTE] Yeah he’s clearly trolling, doesn’t seem to even have a grasp of English, unless dood and rasist are old school proper…

Kovalev is wild in his style of boxing and he seem to have problem with technical fighter... ward showed it and alvarez who have a ok/good power but not great has caused real trouble to Kovalev because of his technical…

[QUOTE=j.razor;18997359]He's good but these fools overrate his a*s.[/QUOTE] For sure. I mean, he is good, but he's perfect at Top Rank, he will receive no real challenges there. Mikey Garcia or Crawford would do a number on Loma.

[QUOTE=Thraxox;18996639]Usyk the undisputed cruiserweight champion is an over hyped puncher, okay :lol1::lol1:[/QUOTE] Dude, you mentioned Usyk, not me. Dont try to twist things.