Nearly six months after suffering an upset knockout loss to Eleider Alvarez, Kovalev out-worked and out-pointed Alvarez in their immediate light heavyweight championship rematch. A busier, more accurate Kovalev beat Alvarez comfortably on all three scorecards to win back the WBO 175-pound championship he lost to Alvarez on August 4.

Giampa gave Kovalev every round in a fight that at least was more competitive than that. Martinez and Reyes scored eight rounds apiece for Kovalev (33-3-1, 28 KOs), who worked off his jab and avoided getting hurt by any of Alvarez’s right hands.

“My goal was to box,” Kovalev said. “He was looking for the big punch, but I kept boxing. The only time I got hurt was when I got a thumb in my eye.”

Kovalev didn’t wear down during the second half of this fight, which has been a problem for him in the past. 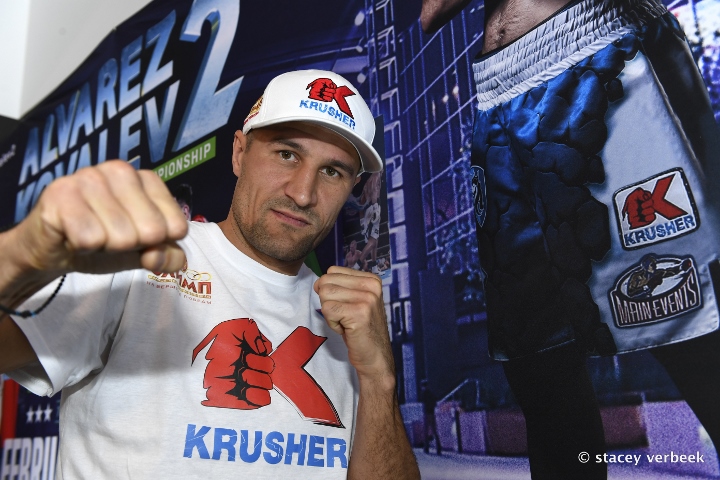 “I have no excuses,” Alvarez said. “I knew he would be the favorite if it came to the decision, but I have no excuses. I don’t feel like a loser tonight, but he did win the fight.”

Kovalev continued to throw and land more punches in the 11th and 12th rounds. By then, it had become clear Kovalev simply needed to avoid getting knocked out again to become champion again.

Kovalev connected with a combination with about a minute into the 12th round. A hard jab by Kovalev caught Alvarez and stopped in his tracks several seconds later.

Kovalev snapped back Alvarez’s head with a stiff jab late in the 10th round and followed it up with a short right hand.

A right hand by Alvarez spun Kovalev around just after the midway mark of the ninth round. Alvarez couldn’t capitalize on landing that shot and was otherwise out-worked by Kovalev in those three minutes.

The eighth round was a competitive one, as Alvarez and Kovalev landed their fair share of punches.

An aggressive Alvarez went after Kovalev’s body early in the seventh round. Kovalev tied him up to stop the defending champion from punching.

Alvarez landed an overhand right with about 25 seconds to go in the seventh round, but Kovalev took that punch well.

Alvarez snuck a right hand around Kovalev’s guard early in the sixth round. Kovalev retreated after taking that shot.

Alvarez landed a short left hook inside early in the fifth round. For much of the rest of the fifth, Kovalev was the one letting his hands go, pressing the action and landing rights and lefts.

Referee Luis Pabon warned Kovalev for hitting Alvarez on the hip just after the midway mark of the third round. Kovalev heeded Pabon’s warning and tried to touch gloves with Alvarez, who wanted none of it.

Kovalev connected with two right hands in separate sequences during a successful second round for the Russian.

Kovalev continually tried to land to Alvarez’s body during the first round. Alvarez mostly backed up in the opening round, but he got Kovalev’s attention when he unloaded a right hand that didn’t quite get there with about 30 seconds remaining in it.

Both boxers landed power shots in an exchange late in the first round, including a left hook by Alvarez that caught Kovalev clean.

The Quebec-based Alvarez won the title by knocking out Kovalev in the seventh round of their August 4 fight in Atlantic City, New Jersey.

Kovalev was winning that fight on all three scorecards – 59-55, 59-55 and 58-56 – when Alvarez hurt him with a right hand that floored Kovalev. The former champion got up, but Alvarez dropped him twice more.

Referee David Fields stopped the action at 2:45 of the seventh round.

Kovalev hired trainer Buddy McGirt to replace Abror Tursunpulatov after Alvarez knocked him out. He said he had a terrific training camp and appeared relaxed throughout fight week, despite that he’s facing a felony assault charge and an $8 million lawsuit stemming from June incident involving a woman in Big Bear Lake, California.

“I have a lot of thanks for my team,” Kovalev said. “They stopped me from over-training and because of that, I was able to put pressure on him throughout the fight.”