Kovalev: Canelo Fight Will Be Interesting – Believe Me!

Sergey Kovalev has a message for those that think this is all about cashing out for him.

The WBO light heavyweight champion might be an underdog against Canelo Alvarez, but the career-high, eight-figure purse he’ll earn for facing the iconic Mexican isn’t the only number that’s important to him. The Russian veteran wants win No. 35 as well, especially since some factions of fans and media have dismissed his chances of overcoming a smaller opponent who’ll move up two weight classes to fight for his 175-pound championship.

“The fight is gonna be very interesting – believe me – because two [fighters] with the same mentality are fighting each other,” Kovalev told BoxingScene.com on Wednesday, before a press conference in Los Angeles. “I never [take] a step back and he never [takes] a step back. It’s interesting. Who will be smarter? Who will be the winner? We will see November 2nd.” 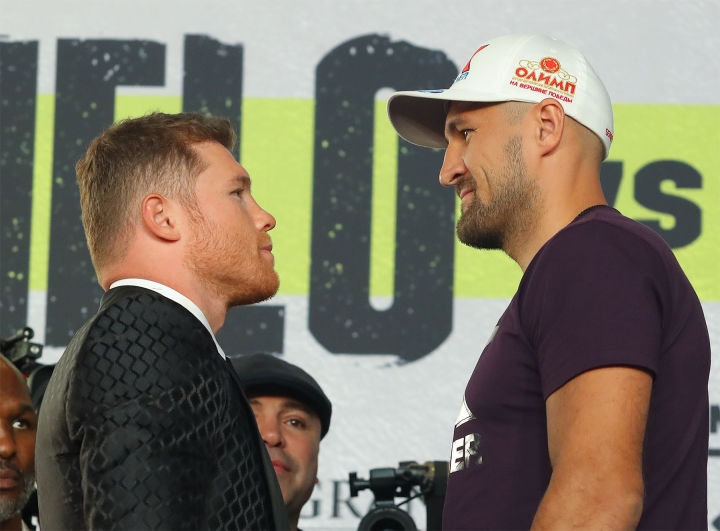 The 36-year-old Kovalev was pleasantly surprised when this high-profile, lucrative opportunity became a reality. When it was first mentioned to the three-time light heavyweight champion that Alvarez was interested in fighting him, and not at a catch weight, Kovalev didn’t believe it.

“First all of all, I thought he was kidding me,” Kovalev said, referring to his manager, Egis Klimas. “My manager said to me, ‘Hey, Canelo is interested in a fight with you.’ Like, ‘Really? OK. What’s the weight?’ [He said], ‘In your weight. Light heavyweight division.’ [I said], ‘No. That’s not right. You’re kidding me.’ [He said], ‘No, it’s real.’ [I said], ‘If it’s real, put a contract and sign it and I’ll go.’ And then maybe two, three weeks, like it stopped about this, speaking. And then again, somewhere like, ‘Yeah, I told you like Canelo, like again, interested.’ [I said], ‘Come on. OK.’

“And often, often, often. … And I already saw on Internet like a lot of people, a lot of boxers started like [saying to Canelo], ‘Hey, take me for the fight.’ Like, ‘Hey, come on.’ It’s funny. And then like I said to Egis, ‘If he’s ready, put a contract on the table and let’s go. Let’s do it. I’m ready.’ And we’re right now here, already on the way to the fight.”

[QUOTE=epyh;20075988]There's about 10 people around 160-176 that have the potential to KO Canelo, and Kovalev of course is among them. He can absolutely batter and stop Canelo. What will happen is actually Canelo winning a tight decision, with Kovalev being…

There's about 10 people around 160-176 that have the potential to KO Canelo, and Kovalev of course is among them. He can absolutely batter and stop Canelo. What will happen is actually Canelo winning a tight decision, with Kovalev being…

Blackjack!😂 Every champion cherry picks. Look at gayweather. One of the worst! But he's a big cherry pick!😂

yupp and it took him 6 tounds to get a blown up 135 pound khan out of there... and angulo ate all his punches for 11’rds

[QUOTE=Jack Napier.;20075024]but its a cherry pick doe!!![/QUOTE] I am not responding to anything you have written, as I agree with the sarcasm and am one of the few who lean Kovalev on this site for this fight, and I think…