Kosei Tanaka has received the most significant upgrade of his boxing career.

On the heels of his latest win, the unbeaten three division titlist from Japan has been elevated to “Super” champion status by the World Boxing Organization. More than half of Tanaka’s 15-fight career have come with a major title at stake, with such honors recognized by the sanctioning body for whose titles he’s fought exclusively through the duration of his young career.

“Mr. Tanaka is a three-division WBO World Champion, having won titles in the WBO Minimum, Jr. Flyweight, and Flyweight divisions, respectively,” noted Luis Batista-Salas, chairman of the WBO Championship Committee of the ruling which was officially approved on January 10, one day after a formal request was filed by Hatanaka Boxing Gym on behalf of Tanaka (15-0, 9KOs). “ Mr. Tanaka’s three-division world champion accomplishment came in just fifteen (15) professional bouts. [He] successfully defended the titles mentioned above against highly skilled and respectable opposition including former WBO, WBA & IBF World Champions. Mr. Tanaka’s total combined record is an outstanding one consisting of 253 wins, 32 losses, with only 14 draws. 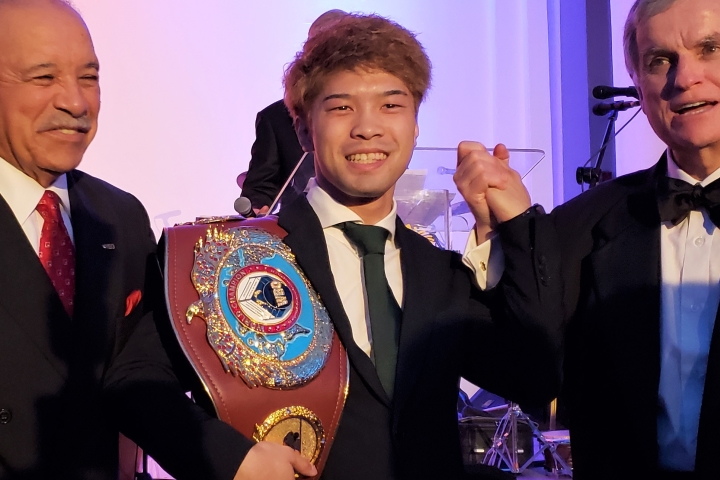 The distinction comes three weeks after his latest victory, a 3rd round knockout of Wulan Tuolehazi last December in Tokyo, Japan. Following the victory came heavy speculation that his 2020 run would include a bid to become a four-division titlist quicker than any male boxer in history. The 24-year old Tanaka is already the co-owner of the quickest path to three divisional records, having done so with a 12-round win over countryman Sho Kimura in the 2018 Fight of the Year which also netted him the flyweight belt.

With the feat, Tanaka tied the record for male boxers established by Vasiliy Lomachenko four months prior. Now named a “Super” champion and with the likelihood of moving up in weight, Tanaka has a clear path to match another record and break another.

The current WBO 115-pound titlist is Kazuto Ioka, who is the only-ever male boxer from Japan to win titles in four weight divisions. Ioka is keen on entering a unification clash with Juan Francisco Estrada for his first order of business in 2020.

That fight could very well happen. So too could a showdown with his countryman, as Tanaka is eager to set the mark for the fastest to four divisional titles, male or female. Japan’s Naoka Fujioka established the feat in her 18th pro fight.

With the title of “Super” champion comes the ability to demand mandatory challenger status in the event Tanaka chooses to move up in weight. Similar approaches have been taken by Amanda Serrano and Oleksandr Usyk, among others, in recent times.

Serrano (37-1-1, 27KOs) was able to capture a seventh divisional title by going that route, scoring a 1st round knockout of Eva Voraberger to win the 115-pound strap last January, then moving up three divisions to handily defeat Heather Hardy in regaining her previously relinquished featherweight title.

Usyk (17-0, 13KOs) served as the undisputed cruiserweight champion, a run which began with a WBO title win over Krzysztof Glowacki and extended all the way through his knockout win over Tony Bellew in defending his slew of alphabet hardware. The Ukrainian southpaw has since made a successful heavyweight debut, stopping late replacement Chazz Witherspoon in seven rounds last October and now serves as the mandatory challenger in waiting to unified heavyweight titlist Anthony Joshua.

While no such plans have yet been announced for Tanaka, the latest honor bestowed upon him by the WBO now grants him more power than ever before in his continued pursuit of rewriting history.

Wbo is garbage! Tanaka to good for that garbage belt!

[QUOTE='fredo [!];20322507']WOOHOO more titles, fk yeeeeeee :fing26:[/QUOTE] [QUOTE=YoungManRumble;20322514]Man I didn't even know the WBO did this. Upon brief reading it sounds similar to the WBC franchise belt almost? Or sounds like their inspiration for it anyway at least[/QUOTE] Just an…

[QUOTE=£-4-£;20322784]Tanaka is a great talent, no doubt. He has a few decent wins but his best win is Taguchi in what turned out to be his final fight. He's definitely a p4p fighter, if he beats Martinez and Mthalane he'd…