Korobov Plans To File Protest Over Majority Draw With Aleem

Sampson Lewkowicz of Sampson Boxing says Korobov is, at the very least, a victim of incompetent officiating after what seemed like a clear decision win for Korobov was initially announced as a majority decision victory and later changed to a majority draw, due a reported mistake in tabulating the scores.

Korobov, from Florida, via Orotukan, Russia, had a well-fought 10-round bout, held in Aleem’s home state at the EagleBank Arena in Fairfax, Virginia. 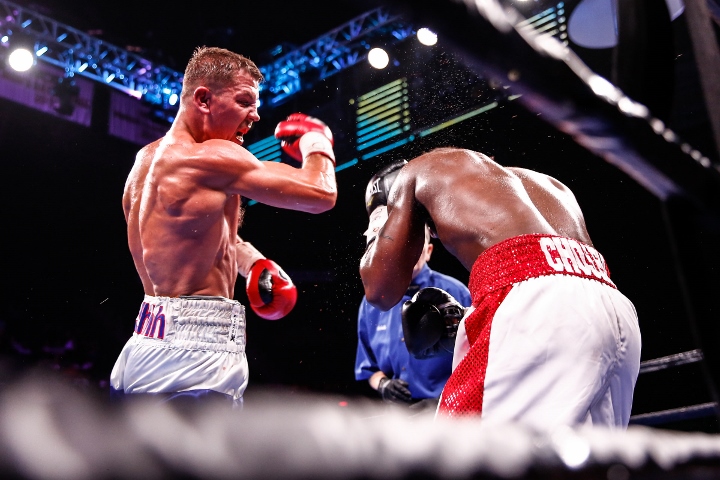 The Russian southpaw appeared to most to win the first seven rounds handily. He scored what should have been ruled a knockdown in round four and hurt Aleem badly in round six before fatigue allowed Aleem to mount a minor comeback in the last two or three rounds of the bout.

Still, at the final bell, Korobov enjoyed a sizable advantage in landed punches (according to CompuBox statistics, Korobov landed 154 punches out of 417 thrown (37%), while Aleem landed 119 shots out of 630 [19%]) and deserved the nod in the eyes of the PBC on Fox commentators, as well as a huge majority of the boxing public.

He didn’t get his deserved victory, however, in the local judges’ eyes.

While New York-based Judge Dorothea Perry logged a realistic score of 97-93, Virginia-based judges Mark D’Attilio and Brian Costello both somehow scored the 10-rounder even (95-95). Strangely, Judge Costello scored rounds three and five for Aleem and gave him the last three rounds. Judge D’Atillo scored rounds four and five for Aleem, then gave him the last three rounds as well.

“It takes away from a great night of boxing when judges do things like this,” said Sampson Lewkowicz. “This poor kid fights his heart out and then they keep taking it from him. He should be the middleweight champion of the world right now. Instead, he’s got one loss and one draw in his last two fights. These judges need to be disciplined. They are affecting the future of the boxer when they render these kinds of decisions. This isn’t a sport where a boxer can just play again next week. This is serious business and these judges need to realize that before they hand in these terrible scorecards. That could have been a great night for boxing to attract new fans and instead it was a reminder of how often a great night of boxing gets ruined by, at best, incompetent officiating.”

I thought Korobov literally won the fight. I don't know how I missed it. I probably hit the fast forward button to soon SMH Aleem didn't do enough to earn a draw that's lame.

The official scorekeeper had one job. How can anyone with any experience arrive at a 96-95 score in a 10 round fight and not immediately think to themselves 'wait a minute, that needs a 10-10 somewhere, which round was that...'…

its a shame, but he did let Aleem back in the fight late.

Korobov getting the foreigner treatment. They seem to enjoy ****ing over the Russian fighters I've noticed.

Korobov let Aleem back into the fight down the stretch.