Korobov: In My Heart, I Don't Believe Charlo Will Fight Me Again

The Russian southpaw just doesn’t think Jermall Charlo will be the middleweight champion who’ll afford him that opportunity. Korobov is convinced Charlo learned during their December 22 bout that Korobov is too high-risk, low-reward to face again, even though their 12-round fight three months ago warrants a rematch.

“Hopefully I am wrong, but in my heart I don’t believe Charlo will ever get back in the ring with me again,” Korobov told BoxingScene.com. “He knows what I did on six days’ notice. With a proper training camp, I would be even more dominant.” 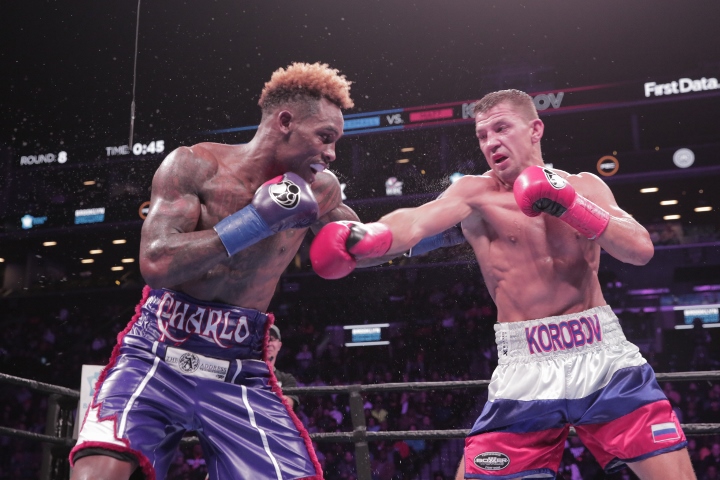 Korobov took their fight on just six days’ notice, once Charlo’s original opponent, Willie Monroe Jr. (23-3, 6 KOs), provided an adverse sample in a performance-enhancing drug test. That didn’t stop Korobov, who was scheduled to fight on the Charlo-Monroe undercard, from truly testing Houston’s Charlo in their 12-round, 160-pound championship match at Barclays Center in Brooklyn.

“I won the fight, but the judges felt the opposite,” Korobov said. “Life is this way. I will get another opportunity for a world title, I believe at end of 2019.”

“Immanuwel Aleem is rated top 15 in WBC and is tough opponent,” Korobov said. “I am not looking past him. I will train hard for Aleem because he has good skills and is hungry. But I am hungry, too.”

Korobov hopes to impress the large audience FOX figures to command for his fight against Aleem, of Richmond, Virginia.

“I am very happy to be back on PBC and FOX,” Korobov said. “My managers [Mike Borao and Jameel McCline] receive offers to fight on other television, but PBC gave me chance against Charlo, so I will stay with PBC. I am very happy all of my family, friends and millions of people can watch me for free on FOX. I will not be satisfied until I win a world title. I know I will accomplish this goal. May 11 is just another step in that direction.”

Charlo, meanwhile, is expected to return to the ring in June. His opponent hasn’t been solidified, but Brandon Adams (21-2, 13 KOs) is one of the candidates to fight for Charlo’s WBC interim middleweight title.

Step back in line! Hogan the real deal!

I would have more respect for charlotte if she gave korobov an immediate rematch. Of course that won't happen! b!tch made only!

korobov exposed that coward charlo I'm glad the other bum brother charlo lost to even out this injustice!!! pbc STOP the robberies!