Eight division world champion, “Fighter of the Decade” and Philippine senator Manny Pacquiao is ripped and ready to go after the WBO welterweight title currently held by Jessie Vargas.

The former champion Pacquiao and the current champion Vargas clash at the Thomas & Mack Center in Las Vegas on November 5 in an eagerly awaited title fight with the Top Rank card spiced up by the WBO super bantamweight title defense of Nonito “The Filipino Flash” Donaire against unbeaten Jessie Magdaleno.

The fights will be telecast on ABS-CBN Sky Cable and Cignal pay per view and on Solar Sports and GMA 7. 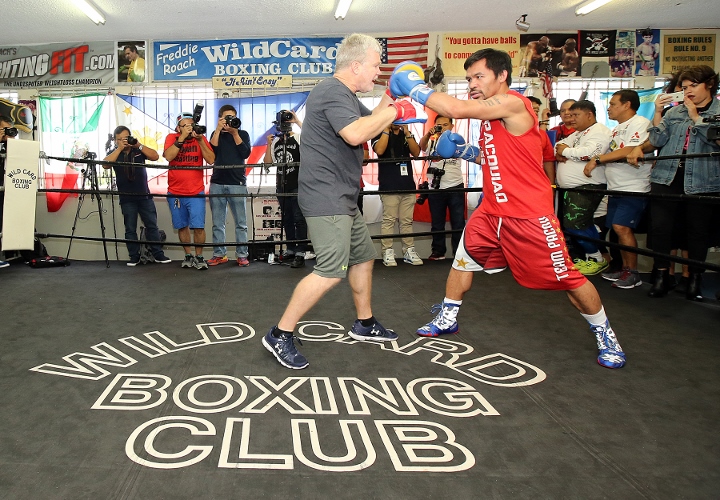 Former WBO/WBA flyweight champion Brian Viloria will be one of the TV panellists alongside Mike Ochosa, now a Philippine boxing judge and this reporter/columnist of the Manila Standard, philboxing and BoxingScene.com and host of Viva Sports, top-rating weekly show “The Main Event."

Speaking  to members of the media after a light public workout the day before, Manny said “it took discipline to manage by time effectively..to balance my training camp and my senatorial duties. I feel good. Every day I was able to get in all my training.”

He said “I ran every morning and did my strength and conditioning with Justin Fortune. I worked with Freddie every evening at the gym after work. There were some days where I would have to come in later if my work in the Senate demanded I stay longer. Between the two jobs, I was averaging 14-hour workdays. Luckily the gym was very close to the Senate so I didn’t have to deal with traffic. I had no real free time to be with friends.

“I am now well-rested. I arrived in U.S. on Saturday evening and today I feel I have recovered from my jetlag. I sparred six rounds yesterday [Tuesday with Ray Beltran]. I will spar Thursday, Saturday and Monday before driving to Las Vegas.

Pacquiao revealed “We have three different plans for Jessie Vargas. My first concern is for the fans; that the people who are going to watch the fight will be happy and satisfied. I want this to be a fight for fans to remember.

“I want to prove that I am still one of the best pound-for-pound fighters. I feel I still have a lot to prove. I am not done with boxing. I will continue to keep fighting as long as I love boxing and boxing still loves me. I do not feel old. I feel like I am still 27. “

Manny will be 38 this December.

Pacquiao added “I do not underestimate Jessie Vargas. He is a good strong champion. You cannot fight at this level and be successful by underestimating your opponent. Every opponent gets my full attention and respect. I respect Jessie and that is why I trained hard. This is the most important fight because it will determine the direction of my boxing career. I need to win convincingly.“

[QUOTE=ChiCityExtractz;17154499]Anyone who insults this man about how he is an amazing boxer doesnt have respect for their own lives. This dude is still going at it, and when he turns it on, its scary. He is now entering the money…

you always know when it is a Ronnie article..lol but Manny should beat up Vargas

I'm 100% ready for Jessie Vargas and I'm sat on my arse having just eaten Pizza and chips and necked 4 double Jim Beam and cokes. Bring him on. KO4.

[QUOTE=ChiCityExtractz;17154499]Anyone who insults this man [/QUOTE] context is Koncz, that filthy medical waiving filing snake... mickey rourke's character in the Rainmaker shıts over the Koncz character like a pimp fugg outta here....

Anyone who insults this man about how he is an amazing boxer doesnt have respect for their own lives. This dude is still going at it, and when he turns it on, its scary. He is now entering the money…