Ibeh beat the favored Vianello on the scorecard of Adalaide Byrd, who scored their six-round heavyweight fight 59-55 for the underdog. Judges Chris Flores (57-57) and Patricia Morse Jarman (57-57) scored the action even, however, which forced Ibeh to settle for a majority draw with the Italian prospect at MGM Grand Conference Center in Las Vegas.

The 26-year-old Ibeh (5-1-1, 4 KOs), a former football player with a limited amount of boxing experience, will want a rematch after battering Vianello and leaving him with a cut and bruises on his face. The 26-year-old Vianello (7-0-1, 7 KOs), a 2016 Olympian from Rome, suffered a nasty laceration along his left eyelid during the second round. 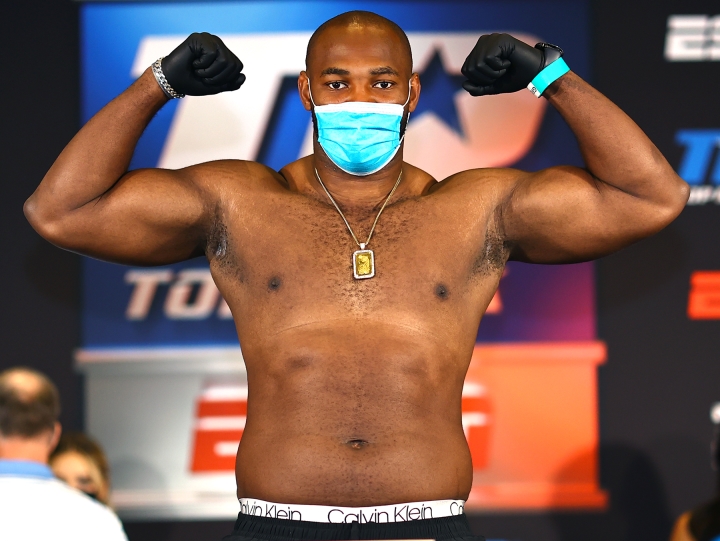 The 6-feet-6, 238¾-pound Vianello had knocked out each of his first seven pro opponents.

The 6-feet-4, 276¾-pound Ibeh, a native Nigerian who resides in Phoenix, fought for the third time since June 25. Vianello and Ibeh were scheduled to fight July 21, but it was postponed the day they were supposed to weigh in because Ibeh tested positive for COVID 19.

Vianello landed a right to the side of Ibeh’s head 53 seconds into the sixth round. Ibeh connected with a right uppercut and then a left hook with about a minute remaining in their fight.

Ibeh’s left hand moved Vianello into the ropes toward the end of the sixth round.

Ibeh buzzed Vianello with a left hook with just over two minutes on the clock in the fifth round. Vianello retreated, recovered and became the aggressor again later in the fifth.

Vianello landed a flush left hook toward the end of the fifth round. Ibeh responded by blasting Vianello with a right-left combination that moved Vianello backward.

Vianello landed a hard jab about 50 seconds into the fourth round. Ibeh appeared to hurt his left arm with just under two minutes to go in the fourth, but that inspired Ibeh to fire back with hard shots.

Ibeh’s right hand in that flurry of punches backed up Vianello.

Bleeding from a cut over his left eye, Vianello fought with a sense of urgency as soon as the third round started. He couldn’t connect with anything that affected Ibeh, though.

Ibeh it Vianello with a right to the side of his head just before the second round ended.

Ibeh switched to a southpaw stance early in the first round. He landed a left hand that made Vianello back up with 1:13 to go in that opening round.

Vianello landed a hard jab with 22 seconds left in the first round.

Vianello is a bum. Mark my words. He will be knocked out by the first serious opponent they will put in front of him.

Reading this headline I had a Kingsley Ikeke Friday Night Fights flashback.

I was looking forward to this fight, as I expected Ibeh to really test Vianello. Ibeh has a good chin, good power and good instincts and athleticism. His weaknesses are inexperience and stamina. I was surprised how long it took…

This is why they need to get rid of their trash commentators and bring back Atlas. He isn’t a homer and would have let them know how disgusted he is with house fighters and corrupt judges. How Jarman still has…