Dominic Ingle implored Kid Galahad to pick up the pace late in his fight against Toka Khan Clary on Saturday night.

Galahad’s trainer thought their 12-round featherweight fight was extremely close. Luckily for Galahad and Ingle, two of the three judges disagreed while scoring their completely unremarkable bout on the Demetrius Andrade-Walter Kautondokwa undercard at TD Garden in Boston.

The previously untested Galahad won their IBF featherweight championship eliminator comfortably on two of the three scorecards and earned a unanimous decision. Two of the judges, Gary Litchfield and John Madfis, scored the fight 118-110 for Galahad, who won 115-113 on judge Steve Clark’s card. 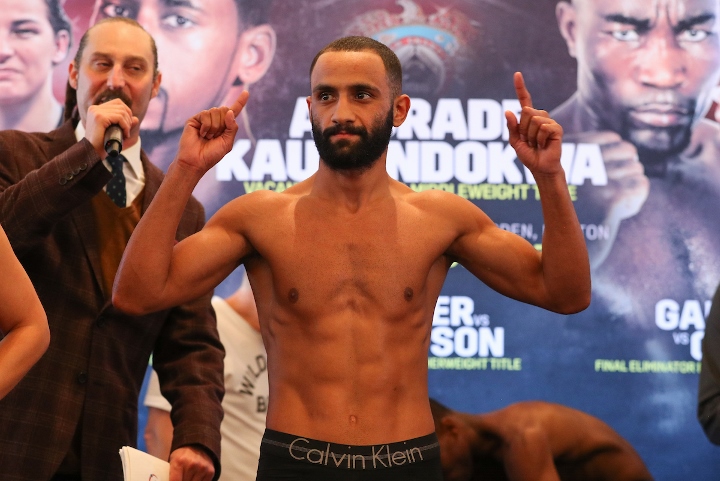 Galahad backed Khan Clary into a corner early in the 12th round and landed a left hook. Khan Clary continually tried to land his left hand during the 12th round, but didn’t have any success.

Khan Clary’s straight left hand caused Galahad to hold him late in the 11th round. Galahad began letting his hands go more during the 10th round and landed more punches in those three minutes than in most of the previous nine rounds.

Khan Clary slipped to the canvas with 15 seconds to go in the ninth round, which featured more back-and-forth action in its final 45 seconds than in the previous rounds.

Khan Clary landed a straight left hand late in the eighth round, which was marred by constant holding by both boxers.

Khan Clary’s left hand knocked Galahad into the ropes 25 seconds into the seventh round. Sooner thereafter, referee Gene Del Bianco warned Galahad for the second time in the bout that he’d deduct a point if he kept stepping on Khan Clary’s foot.

Galahad landed a straight right hand that backed up Khan Clary about 40 seconds into the fourth round. Khan Clary came back to land a straight left hand with just over two minutes to go in the fourth.

Del Bianco warned Galahad early in the third round for continually stepping on Khan Clary’s foot. Del Bianco told Galahad he would deduct a point it if continued.

Khan Clary landed a straight left hand with just under 20 seconds to go in the second round.

thought Toka showed bursts of class, but Galahad too tidy, too seasoned. still, the steroids thing is gonna stick