It’s never pretty when it comes to Kid Galahad, but doesn’t need to be as long as he keeps winning.

The veteran featherweight contender shut down the offense of Dominican Republic’s Claudio ‘The Matrix’ Marrero in forcing a one-sided stoppage after eight rounds Saturday evening at Sheffield Arena in Galahad’s hometown of Sheffield, England.

Galahad (real name Abdul Barry Awad) was in complete control, pouring on the offense in rounds seven and eight. The latter frame prompted Marrero’s corner to have referee Howard Foster to stop the contest. 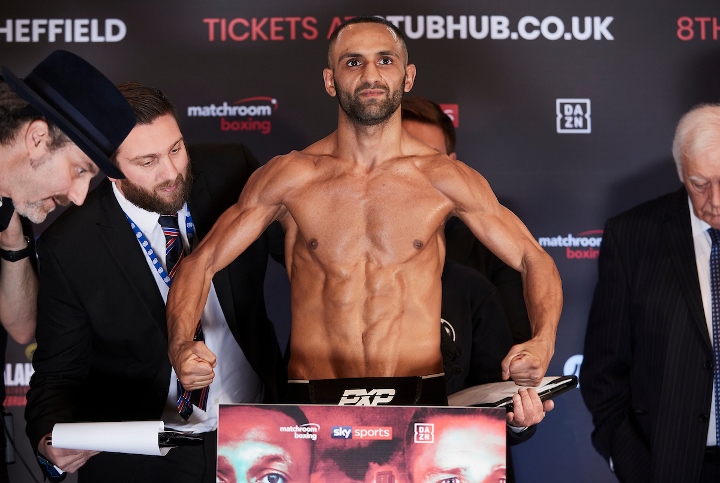 The win once again leaves the locally-based featherweight as the mandatory challenger to unbeaten featherweight titlist JoshWarrington, his lone career conqueror.

Marrero came out pumping his jab, effective in backing up Galahad though failing to follow up with a money shot. Galahad quickly adapted, working his right hand and was effective in smothering Marrero’s punches. The local favorite was issued a stiff warning by referee Howard Foster for an elbow late in the round.

A similar pattern emerged in round two, with Marrero strong early in the frame and Galahad dictating the pace late. Marrero offered a burst in the center of the ring, connecting with left hands and forcing his foe on the defensive. Galahad rode out the brief storm and quickly neutralized the southpaw’s attack with compact right hands and effectively clinching whenever the two were at close quarters.

Galahad offered in and out movement in round three and continuing the pattern in round four, though warned early in the frame for using his forearm to shove back his opponent. Marrero managed a sneak left hand inside, though the sequence was one-and-done as Galahad effectively established a desired distance.

Action was slowed to a crawl, precisely to Galahad’s liking as Marrero reduced the role of plodder. Galahad continued to limit Marrero’s attack to one punch at a time, utilizing every inch of the ring as he alternated between a conventional and southpaw stance.

Marrero sought to pick up the pace in round seven, shooting jabs and left hands with regularity. It wasn’t enough to turn the tide, and in fact just enough to awake a sleeping giant. Galahad offered his best offensive outburst in the fight to that point, busting up Marrero’s nose and landing heavy leather along the ropes.

A visit from the referee to Marrero’s corner preceded round eight, an official warning that the visiting southpaw was officially on the clock. He didn’t offer much in round eight, though a frame where Galahad returned to boxing for much of the frame. A combination from Galahad forced Marrero to fall straight back into the ropes in the final minute, though able to cover up quickly enough to avoid additional punishment.

It was enough for Marrero to make it out of the round, though the start of the one-minute rest period staring at the clock. His body language and overall performance was enough to convince head trainer Jason Galarza to inform the referee that his kid was done for the night.

Galahad fought for the first time since a narrow and somewhat disputed defeat to unbeaten featherweight titlist Josh Warrington last summer. There weren’t any signs of ring rust as the compact featherweight—who turns 30 in March—returns to the win column for the first time in 18 months. His last win also came in this very venue and on the undercard of stablemate Kell Brook, when he marked time in between a title eliminator win and his lone career title fight.

His next fight could be a second crack at Warrington and the belt as he improves to 27-1 (16KOs).

Marrero falls to 24-4 (17KOs), with the Dominican southpaw having now dropped three of his last five starts. The former interim featherweight titlist came in riding high off of a win over Eduardo Ramirez, but is now forced to go back the drawing board after suffering his second career stoppage defeat.

The title eliminator served in supporting capacity to the ring return of local hero Kell Brook, as the former welterweight titlist faces Massachusetts’ Mark DeLuca (24-1, 13KOs) in a scheduled 12-round junior middleweight contest.

[QUOTE=deathofaclown;20377439]Galahad is a very strange fighter. Within the space of a minute, he can look like a very dirty fighter and a spoiler, then he can look excellent and show great skill. One thing i’ll say, is he’s obviously talented,…

[QUOTE=Jerseyjoe981;20378183]Appreciate ur feedback. Got a ? For u since u seem like and unbiased knowledgeable poster. I have rewatched loma fights and have just watched his footwork. Besides him and rigo who do u think r current fighters with the…

[QUOTE=Madison boxing;20377199]hes world class, gave warrington a very close fight who is the number 1 fighter in the division[/QUOTE] Appreciate ur feedback. Got a ? For u since u seem like and unbiased knowledgeable poster. I have rewatched loma fights…

[QUOTE=Jerseyjoe981;20377089]Nice description. Ill give em a shot. Appreciate it.[/QUOTE] I concur with that description, I always like to watch stylish fighters and switch hitters, and he can look good when he gets going and punches with both hands. (Personality wise…