Khan: Look What Happened To Joshua, I Need My Best For Goyat

British star Amir Khan is getting a very big payday for his scheduled bout with Neeraj Goyat.

The bout takes place at the King Abdullah Sports City in Jeddah, Saudi Arabia on June 24.

It will be Khan's first bout since getting stopped in six rounds by Terence Crawford when challenging for the WBO welterweight title at Madison Square Garden in New York City in April. 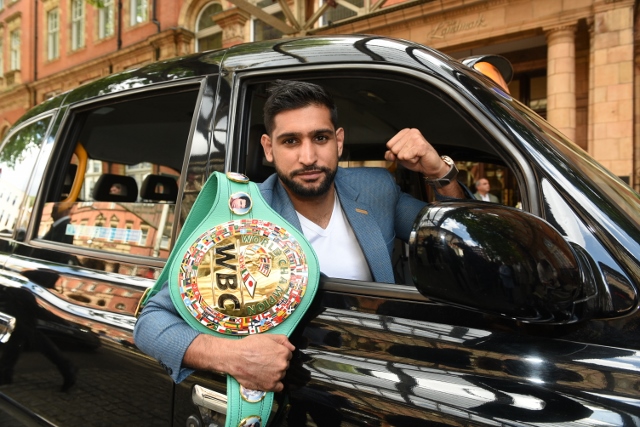 But Goyat, at least on paper, is an overmatched opponent who never faced or beat anyone close to Khan's level and experience.

Khan is not playing it safe - after last Saturday's shocker where Anthony Joshua was knocked out by Andy Ruiz in one of the biggest upsets in boxing history.

"Being a British Pakistani and boxing an Indian fighter, I think just gives this fight even more spice and makes it even bigger than it is, especially in that part of the world," said Khan to Sky Sports.

"I always train hard for a fight. I'm always focused and I always give it my all. I know fights like this could lead into bigger fights, maybe one day getting at Kell Brook, maybe one day fighting Manny Pacquiao, but I don't want to look to far ahead.

"I need to win this fight. No only just win, but win it in good style because if I don't win it or if I don't look good in this fight, then I think it definitely doesn't put me up there with the best in the welterweight division.

"The welterweight division is up there as one of the hardest divisions in the world, you've got some great names in there and I want to get back in that mix again. I never think about losing but losing this fight would definitely destroy me and make him a big name. Things can go wrong, and we all saw what happened with Anthony Joshua getting knocked out by a fighter people thought he'd destroy, so that's why I have to bring my top game. I can't afford to make any mistakes."

[QUOTE=Robertthebruce;19815603]I remember there was a press conference with some bum (called Lo Greco I think) who laughed at Khan about it and Khan threw water in his face after which all his boys (of which many were present) bullied the…

[QUOTE=Redd Foxx;19815477]Oh... You're one of these sad sacks that wants to pretend those were something more than payday exhibitions. Go bother someone else with your insecurities and awful jokes. Khan is a joke at this point. Don't take it out…

[QUOTE=D4thincarnation;19815449]I can see why you are confused, many people never saw Tenshin or Connor as a opponent as well. Strange how some people who are criticising Khan defended Floyd who did much worse.[/QUOTE] Oh... You're one of these sad sacks…