Khan: Joshua Inspiring Me To Rise Up, Sell Out Stadiums Again

Amir Khan fights in Britain for the first time in five years on Saturday and admits the emergence of homegrown boxers like Anthony Joshua has fuelled his comeback.

Khan faces Canadian Phil Lo Greco in Liverpool on Saturday 23 months after he was beaten by Saul ‘Canelo’ Alvarez in Las Vegas, and five years since he last fought on these shores against Julio Diaz in Sheffield.

Joshua had not even started his professional career then but the current world heavyweight champion’s ascent, in bouts that have all taken place in Britain, has ensured the sport’s popularity has risen. 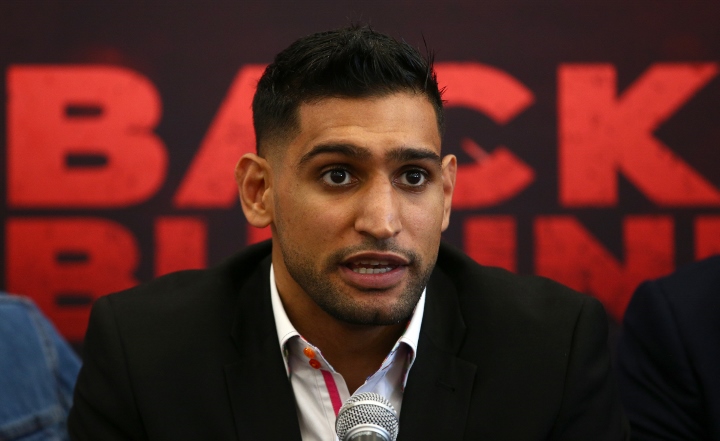 And Khan, who has buried the hatchet with Joshua’s promoter Eddie Hearn to sign a three-fight deal with Matchroom, admits watching high-profile fights in Britain from ringside partially motivated him to return.

“You look at these great fighters like Joshua cleaning up, doing really well, knocking guys out, selling out stadiums and I’m like, ‘Wow, this is where I want to be again’,” the 31-year-old said.

“I’ve done it in the past and I want to do it again. I know I’ve got a style where the crowd will come and watch me and want to see me.

“Fighters like Joshua out there give you that inspiration to come out and do well and sell out stadiums again. Boxing’s on a high. What Eddie’s doing, this is what we needed.

“British boxing was really dying and Eddie’s brought it back alive again. I remember the days when I used to fight in America all the time because in Britain, boxing wasn’t as big as what we wanted it to be.

“In America, I was fighting there because I wanted to make a big name for myself and globally become a star. Now fighters are coming from America to England because of what Eddie’s done. It’s only making boxing a bigger, better sport.

“People respect it more. You walk down the streets and people are talking about boxing.”

When it comes to Khan, the talk tends to revolve around the possibility of a grudge match with fellow Briton Kell Brook, another boxer that is promoted by Hearn.

Brook will be at the Echo Arena on Saturday to see Khan’s comeback up close and his opponent Lo Greco is convinced the 2004 Olympic silver medallist’s best days are behind.

“I was a fan, I think you’ve done great,” Lo Greco told Khan at the press conference.

rise up to get laid down. that's classic khan.

WHY YOU NEED SOMEONE ELSE TO DO THAT FOR YOU. Weak

[QUOTE=steeve steel;18687978]It must really be something in there![/QUOTE] Yeah, he made up all the story about his wife cheating on him. This guy is something else.

[QUOTE=Boksfan;18686773]You know it was only in Khan's head? Boy is completely deluded.[/QUOTE] It must really be something in there!

There's nothing wrong in dreaming or desiring something. You do not need to subscribe to dream.