Khan: I'm The One Fight Mayweather Avoided and Didn't Want!

A fight between Khan and Mayweather had been discussed numerous times, but it never came off.

In 2014, Khan felt he was getting close to securing a Mayweather bout. But Mayweather would face Marcos Maidana, twice. Maidana was red-hot at the time, after winning an upset decision over a ten undefeated Adrien Broner.

Mayweather retired back in September of 2015, when he dominated Andre Berto over twelve rounds. Khan was reportedly in the running for that fight, but he was passed over. 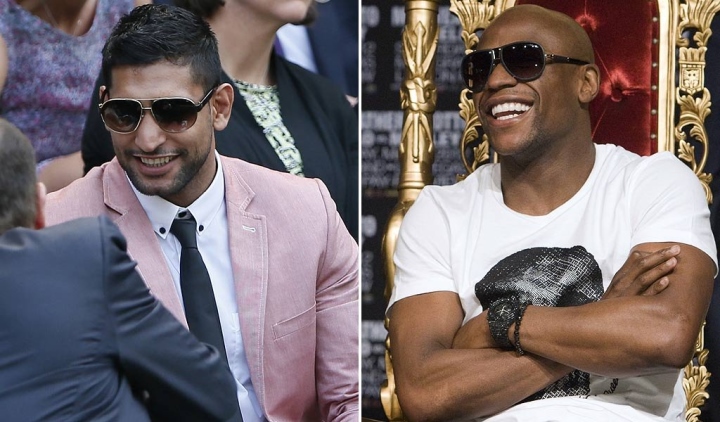 Mayweather returned to the ring once more in August of 2017, when he stopped UFC superstar Conor McGregor in ten rounds. Afterwards, he retired once again with a perfect 50-0, record.

There is now talk by Mayweather, that he will fight once again by the end of this year.

But Khan, a 33-year-old former champion and Olympic silver medal winner, is not holding his breath that showdown will come off.

“I knew in the back of my mind I could have the beating of him. Styles make fights and that’s just one fight he avoided and didn’t want.”

Brook is back in the ring on February 8th in Sheffield, against American Mark DeLuca. The date will mark Brook's first bout since December of 2018.

A fight between Khan and Brook has been approached for several years. At this point, it's now or never to make the contest happen.

Khan is a joke of a fighter and he knows it

[QUOTE=KillaMane26;20339095]You again..... U should be banned from speaking on boxing topics involving Floyd... That hate has you over here supporting triangle theories. WOW Aka Casual fan 101[/QUOTE] Lmao the truth hurts ya, I know! You should pick a different sport…

[QUOTE=Oregonian;20339080]——-// Lamont Peterson wasn’t a big puncher and he went to war with him. Maidana was a big puncher and AK survived another battle of attrition. AK has struggled with nondescript fighters a few times and has one up short…

[QUOTE=BoomBapTrap;20337088]Actually sometimes they do. And in this case, it does. And prime Khan beats Floyd. Since Floyd ducked prime Khan, we have nothing to go by other than similar opponents. And Khan beat Maidana, and Maidana whooped Floyd. So, Khan…

[QUOTE=Inspired;20337524]Well, that version of Floyd no longer had ko power, so there's the argument that AK could have outboxed him. We didnt get to see Floyd box vs that style at that time did we? AK was losing to big…