Khan: I Can't Lose Focus With Crawford Like I Did Against Vargas

Amir Khan knows he cannot afford the lapse in concentration that cost him in the second round of his last fight.

Khan already had knocked down Samuel Vargas in the second round of their September 8 bout. Feeling like he was in complete control, Khan let his guard down for a split second.

Before he knew what hit him, Khan was on the seat of his trunks himself. 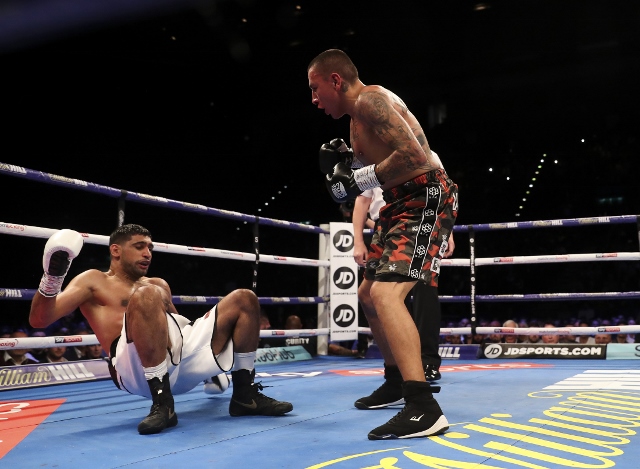 The British welterweight recovered quickly, dropped Vargas again in the third round and went on to soundly defeat Vargas by unanimous decision six months ago in Birmingham, England. Khan understands, though, that the knockdown he suffered during that win was enough to create even more doubt about a questionable chin that is widely viewed as his biggest disadvantage against Terence Crawford as their April 20 bout approaches.

“That’s the only time I really lost focus in the fight,” Khan explained to BoxingScene.com. “In the fight, I put him down and I was winning the fight quite easily. And, you know, you take your eye off the game, I stood still and he caught me with a good shot over the top and put me down. Sometimes you lose that focus and things like that can happen. I know that against a guy like Crawford I can’t lose my focus one bit because he’s really dangerous, he can hurt me and he can beat me. So, I’m never gonna do that. I’ll be more switched on against Crawford, knowing that it’s a big fight and there’s a lot on the table.”

The 32-year-old Khan has prepared himself much better for this potentially career-changing fight than he did for his last two bouts.

“I mean, I think this is a fight that I am the underdog. Other than this fight, I think the only other fight was against Canelo when I was the underdog. He was way too big and way too strong. But the other fights I’ve lost, I’ve always been the favorite. That does put a lot of pressure on you. But at the same time, you do take your mind off the game a little bit.”

Khan is fast but he is so predictable, his output is routine and an opponent with good timing will get him. All they need to do is wait. Like Canelo and Garcia did. Having a weak chin doesn't help too.…

[QUOTE=Mister Wolf;19634182]Has nothing to do with focus. Amir Khan doesnt utilize head movement for defense. It isnt in his skillset never has been. If you dont have head movement then you better have a good chin which he doesnt.[/QUOTE] No…

[QUOTE=Ca$ual Fan;19635834]Bud will most likely beat Khan. But I would just like to point out that it's different when you're clinching to survive and avoid getting hit than clinching because that's how you fight. When Bud muscled back Horn in…

[QUOTE=HarvardBlue;19634550]You pretty much have the Khan game plan. Same plan he had against Collazo, Judah, Alexander with an emphasis on holding. He tried it against Peterson but kept pushing his head down and got points deducted. He'll try with Crawford…