Khan: I Can't End Career With Canelo Being My Only Big Fight!

Former world champion Amir Khan (33-4, 20 KOs) is hoping to get a mega-fight with either Manny Pacquiao or Kell Brook.

At only 31, Khan is still at a young age but he wants to retire in the next few years.

Khan has fought twice in 2018, and aims to fight for a third time before the year is over. He blasted out Phil Lo Greco in less than a minute in April, and then earlier this month he won a tougher than expected decision over Samuel Vargas. 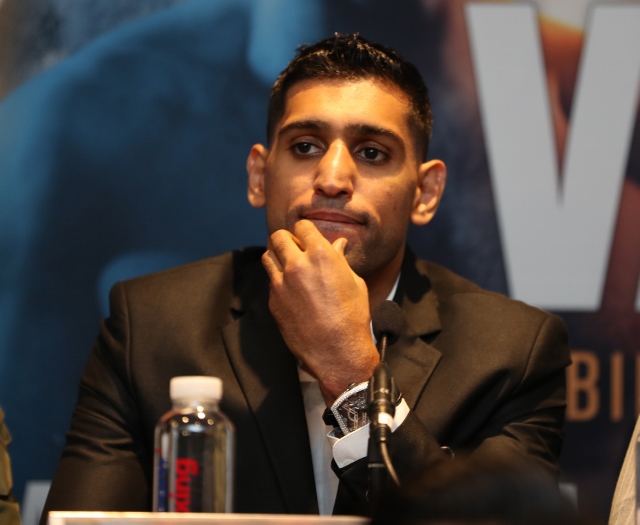 The biggest fight of Khan's career was a 2016 showdown with Saul "Canelo" Alvarez, who at the time was the WBC middleweight champion.

Their HBO Pay-Per-View fight was the first boxing event at the T-Mobile Arena in Las Vegas.

Khan started off well, but got knocked out brutally in the sixth round.

"If I leave this sport having not fought either Kell Brook or Manny Pacquiao, I will only have had one big fight against Saul 'Canelo' Alvarez. I went up two weight categories and gave too much away, because I thought it would make me a star. I want a big fight to show the world that I belong at the top," Khan told Sky Sports.

"Then I will finish and be happy to walk away, knowing that I've given my fans everything that I have. It will be on my terms. I swear, this is what burns my energy. I want to burn my energy in a positive way. I love that people like me because of my boxing. Why should I leave?"

This is why he wants Pacquiao or Brook - if not both.

But he admits, that against that level of competition he can't afford to get dropped as he did in the fight with Vargas or in some of his past performances.

As much as I joke about Khan, he has been in with some really solid fighters. He could have gone down in history as one of the great ones if it weren’t for his chin. Imagine if Khan only had…

[QUOTE=GGG Gloveking;19124713]I read that as Khan saying he's not smart enough to stay in good position[/QUOTE] He talks so much ****. The knock down vs Vargas was absolutely nothing to do with 'position'. He was caught with one big looping…

Khan should be all over social media right now offering his services to Floyd Mayweather as his Dec. Fight to prep for tha Manny rematch.

What are the chances of Floyd staging a comeback to take Pacquiao away from Khan?? Make a couple of mil and troll Khan in the process, lmao

[QUOTE=5000boxing;19124179]The problem is your chin is made out of sheetrock! Lol[/QUOTE] Actually, Amir's chin is constructed from recycled poppadum.