The 'Revolver' of Morga is scheduled to make a defense of the Euro belt against British contender Frankie Gavin (25-3, 15 KO), as the main event attraction on November 17 at the Bilbao Exhibition Center (BEC) of Barakaldo, as confirmed on Tuesday by MGZ Promotions, who handle the talented champion.

Gavin, 32, was named last month as the official challenger for the European Boxing Union (EBU). 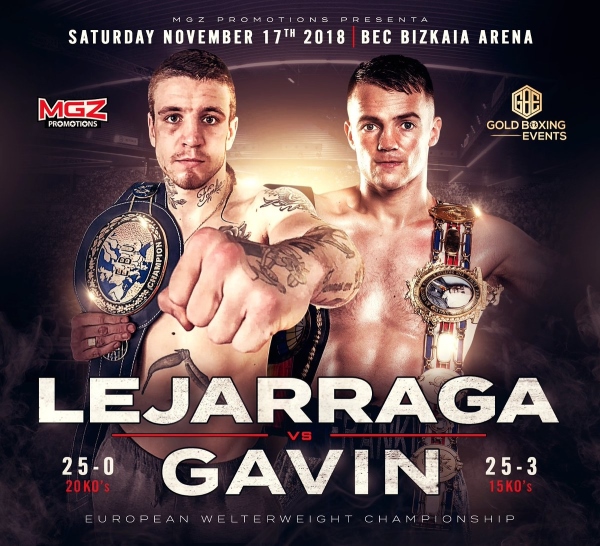 The last defeat of the boxer from Birmingham was against his compatriot Sam Eggington, on October 22, 2016, in a fight in which the WBC International belt of the division was put into play.

Gavin's last fight was just over a year ago, on June 3, 2017, and it ended with a victory by technical knockout against the Nicaraguan Félix Matamoros.

Lejarraga, meanwhile, won the continental belt on April 28 in Bilbao by securing an impressive technical knockout in the second round against another British contender, Bradley Skeete . It was an impressive win that catapulted Lejarraga to a top three or four ranking position among the main boxing sanctioning bodies (except the WBA).

Before he makes the defense of his European title, Kerman will return to action in July in Marbella, in a ten round bout against an opponent yet to be confirmed.

IN OTHER NEWS:  On Friday, July 20th exactly one week after the culmination of the 2018 FIFA World Cup. The Telemundo Network will launch their successful boxing series, Boxeo Telemundo Ford Summer Series.

On what is anticipated to be a flyweight blockbuster hot summer debut, Jonathan "Bomba" Gonzalez (20-2-1 12KO'S) of Caguas, Puerto Rico currently ranked #9 WBO,#7 WBA,#15 IBF looks to solidify his standings in the flyweight division as he inches closer to a world title opportunity on July 20th at the Osceola Heritage Park in Kissimmee, Florida.

But first he must defy the odds by defending his WBO NABO title and defeating a game world title challenger from Mexico City, Mexico, Julian "El Niño Artillero" Yedra (24-3-13 KO's).

Gavin needs this win, what once looked like a career full of potential at one point now looks like a mediocre domestic level type of career. I don't think he will get it though, Bradley Skeete is arguably a better…

[QUOTE=BigZ44;18856307]This will end with Gavin on his back staring up at the ceiling. I'd be trying to sign Lejarraga and bring him to the states if I were Hearn[/QUOTE] I wouldn´t bet my house on that! Gavin may end up…

Seems dangerous to fight a guy like Lejarraga coming off a year plus layoff.

[QUOTE=BigZ44;18856307]This will end with Gavin on his back staring up at the ceiling. I'd be trying to sign Lejarraga and bring him to the states if I were Hearn[/QUOTE] Lejarraga is fun to watch. And he will kill Gavin But…

This will end with Gavin on his back staring up at the ceiling. I'd be trying to sign Lejarraga and bring him to the states if I were Hearn