Kenneth Sims Jr. may not have known how good a boxer he was as he compiled win after win on the amateur circuit, but soon, the hardware told the tale, as he began to win too many trophies to keep at home in Chicago.

“I started giving them away to my cousins and my grandmother as I got older,” he laughs. “I kept some of them, but a lot of them I gave away. Once I started winning nationals and getting the belts they give out, and the medals, I started giving the trophies away.”

Sims was this close to a berth on the 2012 U.S. Olympic team, losing to Jose Ramirez at the trials, but he was always better suited for the pro game, and he entered the punch for pay ranks in 2014, quickly compiling a 6-0 record. 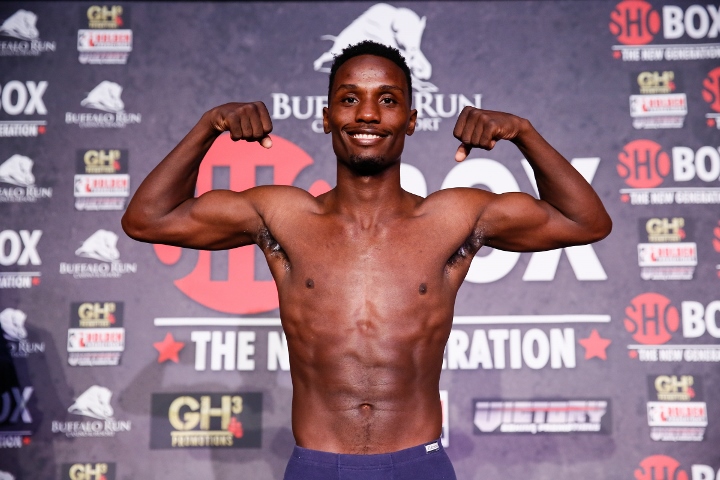 Then everything stopped, as contractual issues sidelined him for nearly a year. All of a sudden, the hot prospect was a spectator and not a participant in the sport he loved.

His family kept him focused during this time, but it was another voice that really hit home for Sims, that of pound-for-pound king Andre Ward.

“He told me to be patient,” Sims recalls. “He said I’m still young and once I get back working, take it one fight at a time and it will work out. He’s my favorite fighter and one of the guys I look up to, so hearing that from him was motivation to keep patient and know that my time is coming.”

It was a crushing blow for the 23-year-old, who tries to keep a positive outlook in a city making headlines for gun violence. It’s why when he goes to the gym, his purpose isn’t just to prepare for a fight, but to be an example.

“When I train, I try to train while there are kids at the gym so they can see,” he said. “They look up to me like I’m a superstar already, so them being able to see me on TV and I’m from the same neighborhood as them is a big bonus.”

This Friday, Sims will be on Showtime as he puts his 12-0 (4 KOs) record on the line against Rolando Chinea in a ShoBox bout. It’s the kind of platform he can use to take his career to the next level, but the junior welterweight prospect is continuing to take Ward’s advice by staying patient and taking it a fight at a time.

“I know it’s important, but I’m trying to keep level-headed knowing that this is just another fight that I have to take care of business in like any other fight,” he said. “I’m really patient when it comes to everything because it could be worse. I could be stuck not fighting at all. So as long as I’m fighting, I’m working my way up.”

And with each fight, he’s carrying a lot more into the ring than just two fists. He’s got his family, Ed Brown, and every kid who looks up to him in the gym with him. That makes Sims a tough man to beat.

“I’m fighting for everybody that’s helped me or looked up to me or supported me,” he said. “I want them to know that their support is not in vain and I appreciate everything. I want to win for them to show them that I appreciate it and I’m doing my best to be the best that I can.”

That’s a lot of weight for a junior welterweight’s shoulders, but he’s carrying it well and, as he explains, when that bell rings, there’s no place he would rather be.

This line right here shows a guy with his entire heart into the game: Sims said “When I’m in the ring, that’s when I’m having the best time of my life.”