Ricardo Mohammed-Ali, the surgeon who fixed Kell Brook's fractured orbital bones, has backed Daniel Dubois' decision to end his fight with Joe Joyce in the tenth round on Saturday night in London.

Dubois, who was up on the official cards at the time of the stoppage, was dealing with a badly swollen left eye.

During the tenth, Dubois was hit directly on the eye - which prompted him to voluntarily take a knee. He allowed the referee to count him out. 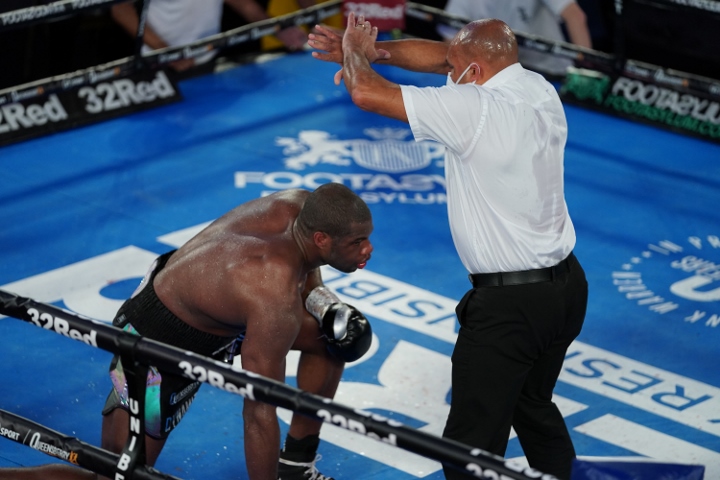 It was revealed in the aftermath, that Dubois suffered a fractured orbital bone and also sustained nerve damage around the eye.

According to Dubois, when he was tagged on the eye in the tenth - the impact made his vision, in the left eye, momentarily go black.

Brook had been stopped in two fights, against Gennady Golovkin and Errol Spence, due to fractured orbital bones.

Dubois' decision to call it day has created a fiery debate among boxing fans - with one side believing the fighter quit and the other side supporting the 23-year-old's decision to do what's best for his health.

Had he continued to fight, surgeon Mohammed-Ali believes Dubois could have suffered a career-ending injury.

"As someone who's fixed a lot of orbits, I'd say that it would be safe to discontinue if there's a suspicion that there's a fracture or risk of visual loss," Mohammed-Ali told Sportsmail. "It definitely could be a career-ending injury.

"If the orbit is fractured and the eye moves back, if they receive more blows… it can actually drop down into the sinus. So further damage to the orbit, making the defect even bigger and harder to reconstruct and restore to some sort of function that a professional athlete would require."

Surgeons can fix the problem using materials such as titanium but double-vision can remain for weeks, while sparring is not recommended for three months.

"All my respect to Joe Joyce, he won fair and square," Dubois said. "I'm out of hospital and will wait now for the fracture to heal."

[QUOTE=Patsfan bri;20921625]No need for racism dude.[/QUOTE] White people cannot be victims of racism. They invented it, perpetuate it and benefit from it in a way that no other people of the planet earth do.

[QUOTE=BLASTER1;20922687]Also The Monster Innoue fought thru a fractured eye onwards from the 3rd round. Now thats what it takes to be p4p.[/QUOTE] Could not agree more with you.

[QUOTE=Patsfan bri;20920018]I’m not a fighter but it’s not coincidence that brit rhymes with quit. I can tell you a guy who would fight through it, Joe Smith. Dude fought with a broken jaw from 2nd rd on til the end.[/QUOTE]…

Boxing is brutal so are some boxings fans...Learned from Margarito/Paquiao fight and look what happened to his eyes now for not quitting!!!:feedback:

[QUOTE=ShaneMosleySr;20921369]The keyboard warriors didn’t choose to box professionally for living. So we expect more from Dubois than we do from a message board poster. Logic is fun![/QUOTE] Oooooo I get it! We expect a man with a cracked orbital bone…