Former IBF welterweight world champion Kell Brook is keeping his training situation under the radar at the moment.

The Sheffield Star spoke to Brook regarding rumors that he split with his career-long trainer, Dominic Ingle.

The paper revealed that Brook is in camp at Feurteventura with retired fighters Adam Etches and John Fewkes, who may or may not be training him for his upcoming return. 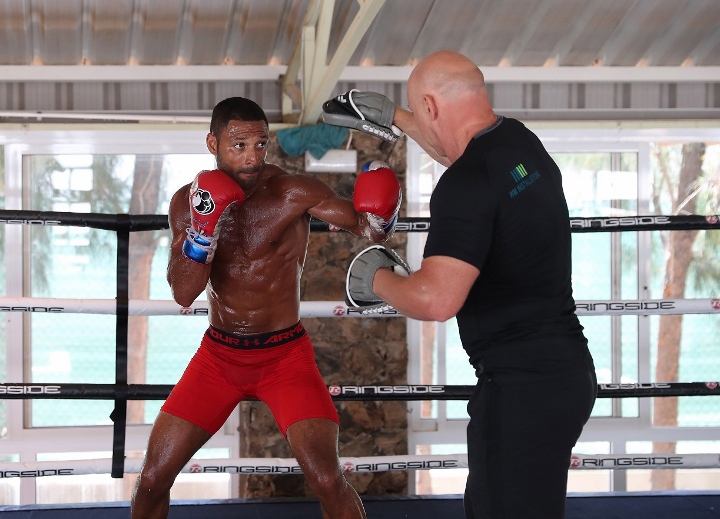 Brook was asked point-blank if Ingle was still his trainer - to which the boxer replied: "He could be - he could not be...it's like that Bruce Forsyth game. All I can say is I am training extremely hard in Fuerteventura, three times a day, for a fight in December."

Etches was not giving up much information either.

"Great things are going to happen, not just for me and Kell and John but for everybody. It is all exciting," Etches said.

Fewkes, who works out of a gym in Gleadless, refused to confirm his role with Brook and would only reply with "I am under orders" when questioned about his association with the Sheffield fighter.

Brook has only been in action once so far in 2018, with a two round destruction of Sergey Rabchenko back in March. It was Brook's debut in the junior middleweight division, after suffering a knockout loss last year to Errol Spence in a mandatory welterweight fight for the IBF strap.

The goal for Brook is a fight in the first quarter of 2019 with career rival Amir Khan. The two sides are currently in talks to fight each other, through their mutual promoter Eddie Hearn. The issue right now is the requested rehydration clause by Khan. Both sides have agreed to the welterweight limit of 147, where Khan competes. But the Bolton man would like a second day weight-in, with Brook being allowed a ten pound max above the limit.

i wish amir khan would go tightlipped. or just go away, even better!

[QUOTE=apollocreed;19218006]This looks like it's probably come about because of the BJS scandal. Brook most likely doesn't want to be associated with a gym that's had two drug suspensions in recent years.[/QUOTE] Yeah, I agree. There's a lot of skepticism around…

This looks like it's probably come about because of the BJS scandal. Brook most likely doesn't want to be associated with a gym that's had two drug suspensions in recent years.

[QUOTE=THEFRESHBRAWLER;19217637]Now this I can agree with. Khan has wasted so many years. He’s becoming a fraud to me.[/QUOTE] He's not becoming a fraud. He's been a fraud since he moved up to welterweight and started obsessively stalking Mayweather and Pac.…

[QUOTE=yammy25;19217451]Khan's too busy trying to suckle on the old grey titty of Manny thinking it'll cement his non existent legacy of he beats him. That rehydration ish for brook was disgusting from khan. Biscuit whiskers knows he gets chinned by…