Keith Thurman: This Is My Job, And I'm Doing What I Love

Keith Thurman couldn’t have been more thrilled to get in his first fight in nearly two years upon his ring return earlier this year.

There was evidence of ring rust in his 12-round win over Josesito Lopez, sure. But most important to the unbeaten welterweight was the ability to be able to fight while still at or close to the peak of his career after injuries stole a chunk of his prime years. 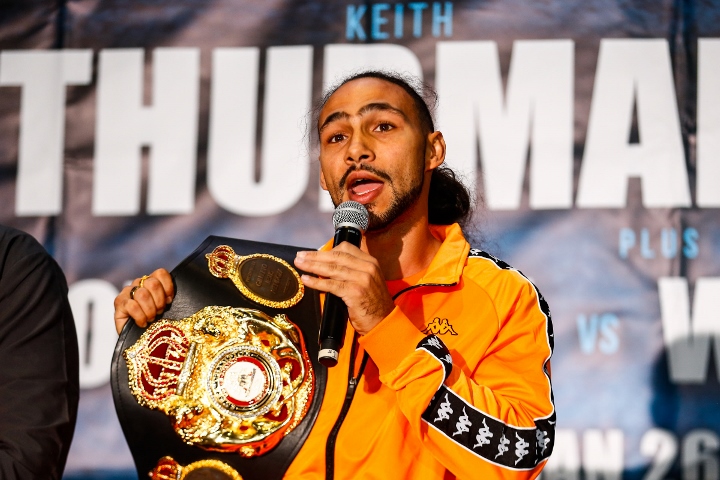 The 30-year old Florida native couldn’t love his current job assignment any more, as he prepares for a welterweight title defense versus legendary former eight-division titlist Manny Pacquiao (61-7-2, 38KOs). The two collide on July 20 at MGM Grand in Las Vegas, atop a Fox Sports Pay-Per-View event which has been hailed as—on paper—the best card of 2019 to date.

“This is my entertainment. This is my job, and I’m doing what I love,” notes Thurman, who prior to 2019 hadn’t fought since a March 2017 title unification win over then-unbeaten Danny Garcia. “If you don’t love what you do then you need to find a new job.”

There were times during his recovery period where Thurman admittedly carried uncertainty over whether he’d have to find a new way to make a living. Back-to-back injuries twice stalled his comeback plans, leaving him with just two fights in a 30-month span prior to returning this January.

It left him in an unfamiliar place—displeased, in stark contrast to his general happy-go-lucky nature. Normally among the game’s best interviews, the reigning welterweight titlist instead shut down everything until he had good news to share.

It’s been nothing but good news ever since the calendar flipped over to 2019. Thurman’s ring return serves as the most watched boxing event of 2019, as he now enters his first Pay-Per-View headliner against one of the most iconic figures in modern boxing history.

Pacquiao’s title wins in eight weight divisions remains a boxing record which no male fighter figures to threaten anytime soon. Even at 40 years old, the punching politician—a two-term Congressman and a current Senator in his native Philippines—remains among the very best in a forever-stacked welterweight division.

Regardless of what happens on July 20, Pacquiao’s place in the International Boxing Hall of Fame has been long secured. Anything he accomplishes from here on out can only enhance his already cemented status as a true all-time great.

Thurman’s self-confidence and in-ring résumé suggests a path also destined for greatness. Just how great he can be remains to be seen; all he knows is it’s why he does this in the first place—and couldn’t be more grateful to once again be healthy enough to add to his growing argument.

“All I want is for one day, 20 years from now when people are arguing who did this and who did that, I want that one dude to say ‘I really liked that Keith ‘One Time’ Thurman. That’s what I want, to be among that discussion,” insists Thurman.

[img]https://i.imgur.com/yfZtt6g.gif[/img] If boxing is Keith's job, hes part-time. Are you ready for this work tho?

[QUOTE=G G G;19890574]You are a phgt and you are getting knocked out like the coward runner you are. All that talk to retreat like a hoe on fight night. I could KO you myself punk. War Pacquiao![/QUOTE] Dude you aren’t…

thurman talked all that crap about manny then starts to sound like him now .. "this is my job, and i love what i do"?? manny pacquiao: "im just doing my job, boxing is my passion"

You are a phgt and you are getting knocked out like the coward runner you are. All that talk to retreat like a hoe on fight night. I could KO you myself punk. War Pacquiao!