Keith Thurman: There Might Be A Lesser Step Next Than Rematch With Porter

Keith Thurman is interested in fighting Shawn Porter again, just not necessarily next.

Their fan-friendly fight in June 2016 provided some of the best boxing action of that year. Their 12-round battle for Thurman’s WBA welterweight title was so close that it warrants a rematch.

The 31-year-old Thurman (29-1, 22 KOs, 1 NC) hasn’t fought since he had surgery on his left hand in September, however, which would probably preclude Porter (30-3-1, 17 KOs) from becoming his opponent in Thurman’s first fight back.

“I’ve heard Porter might be interested in a rematch,” Thurman told host Dan Rafael in the most recent episode of “Stars And Champions” on Impact Network. “That’s a legitimate fight. I’m not sure exactly if it’s the necessary move right now or not, but it’s legitimate, you know. I mean, I’m not saying no, but I’m not saying yes because I just wanna see what else is out there right now. But it’s a good fight. I like the fight. I liked it the first time. I like it again. We have a great rivalry. I can already imagine the trash talking that could happen in that fight.” 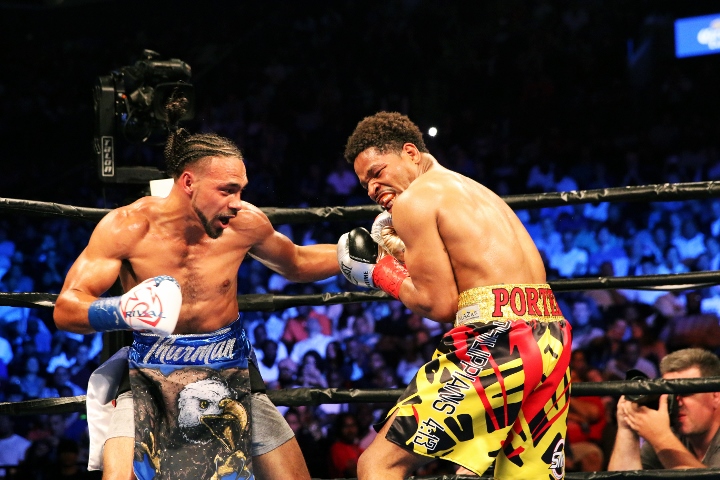 Rafael, a BoxingScene.com contributor, pointed out that Porter suggested Thurman doesn’t really want to fight him again during Porter’s own recent appearance on “Stars And Champions.”

“I don’t know what would make him think I wouldn’t be open to the rematch,” Thurman said. “We have a great rivalry. We have great history. The fans know it. We were Showtime’s ‘Fight of the Year.’ I mean, there’s just so much to it, you know.”

Nearly four years later, Thurman is in the process of building up strength in his jab hand. The former WBA/WBC welterweight champ still doesn’t have full use of it nine months following a surgical procedure in which bones were fused in his left hand.

Thurman, of Clearwater, Florida, worsened his hand injury during a 12-round, split-decision defeat to Filipino legend Manny Pacquiao (62-7-2, 39 KOs) on July 20 at MGM Grand Garden Arena in Las Vegas.

“When it comes to me, I just wanna get back in the ring,” Thurman said. “You know, I’ve been through so much, I know what it’s like. I love fighting the best. I’ve put my body through a lot. Now that I’ve had hand surgery and I’m coming out of that, that’s the only move, you know, is Shawn Porter the right next step? There might be a lesser step because we’ve done a lot of tough fights. We’ve done a lot of challenges and stuff, so maybe in that retrospect, that’s why he feels like Thurman doesn’t need him, you know, or doesn’t really wanna take the fight. I do, but I just wanna weigh it up against other things at this current moment.”

[QUOTE=Doubledagger;20635046]I really hope I'm wrong too, or that he wisens up and makes the right promotional decisions. Look how Andrade turned out because of poor promotional choices? I don't want that for Boots either.[/QUOTE] I hear you loud and clear…

[QUOTE=MulaKO;20630272]Very valid point I just hope your absolutely wrong Boots , imo , is the goods[/QUOTE] I really hope I'm wrong too, or that he wisens up and makes the right promotional decisions. Look how Andrade turned out because of…

You people have been falling for this sucker’s bs for years and I hope you finally see through this clown. I wish he would move on to the band he’s trying to start and leave boxing alone.

Of course. Don't worry Thurman. If he is looking for a big fight I can't imagine anyone wanting to avoid him.