Keith Thurman: Porter Has The Power To Hurt Spence

LOS ANGELES – Errol Spence Jr. is considered the superior puncher in his fight with Shawn Porter.

The powerful southpaw has knocked out 84 percent of his pro opponents, including Kell Brook, who beat Porter by majority decision five years ago. Porter’s knockout ratio is significantly lower (52 percent), but one well-informed former welterweight champion warned skeptics that they shouldn’t doubt Porter’s power.

Keith Thurman shared the ring with Porter for 12 rough rounds three years ago. He knows first-hand how hard Porter punches at times.

“I know he has the power to hurt people in the ring as well,” Thurman told BoxingScene.com. “A lot of times he jumps in and he smothers himself, but every once in a while, he can hurt you. I’ve watched him fight since he was 17 years old. He was competing at 165, so size is not an issue. He’s strong, he’s rugged and he has always competed against the best. And we’re just gonna see how this 12-round championship bout goes down.” 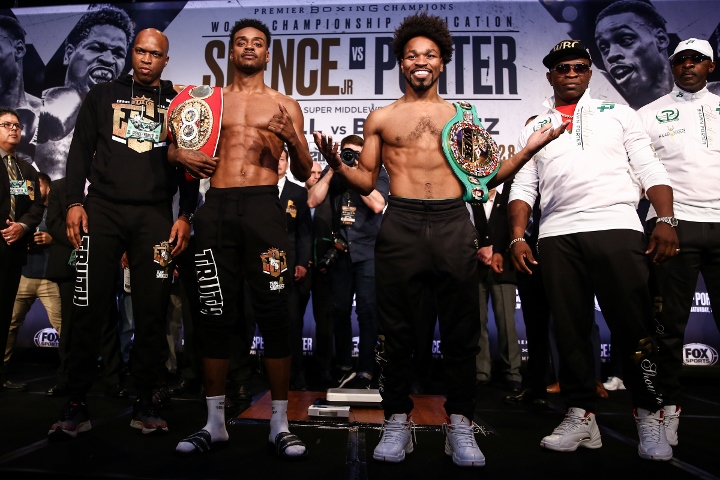 Thurman respects Porter (30-2-1, 17 KOs), but the former WBA welterweight champion expects Spence (25-0, 21 KOs) to win their 12-round, 147-pound title unification fight Saturday night at Staples Center. He is intrigued to learn, though, how Spence will handle the rugged Porter’s physicality in their FOX Sports Pay-Per-View main event.

“I’m interested in it because I know what Shawn can do,” Thurman said. “He can make you feel uncomfortable in there, and I wanna see his performance now, over his last performance, because I wasn’t a fan of his last performance, with the outside boxing against [Yordenis] Ugas. I think he loses in that format, so I wanna see if he brings the intensity that he brought me three years ago in Barclays [Center] to Errol Spence. If he does, we’re in for a more competitive fight. And Errol’s dominated a lot, so I think if Shawn makes it so that Errol does not dominate him in the fight, then even if he was to lose he’ll get a lot of respect because he still might be Errol’s toughest fight to date.”

Not much separated Thurman and Porter in their 12-round fight for Thurman’s WBA title in June 2016. Thurman won a unanimous decision, but by the same slim margin, 115-113, on all three scorecards at Barclays Center.

Thurman (29-1, 22 KOs, 1 NC) still feels Porter operates on a lower tier of welterweights than him and Spence.

“One of my initial things about Shawn was I feel like he’s at the top,” said Thurman, who lost a split decision to Manny Pacquiao on July 20 in Las Vegas. “I feel like he’ll always be in the top five, not necessarily always be in the top three. And if Shawn was to win this fight, he would prove me wrong on that statement because he would easily be top three after beating Errol Spence.

“If Errol’s elite, he should be able to beat Shawn. If you’re always gonna be top three in your division, you’ve gotta beat the Shawn Porter of that division. That’s how I feel. Errol has been at the top of that division for a long time. He rose quickly. He’s got a tremendous record and he wants to keep that all going.”

Porter has the physicality, heart, and Chin to provide an upset.

[QUOTE=markther;20085897]Porter isn’t beating Crawford and everyone in boxing knows that.[/QUOTE] I don't know that, not at all. I would have to see it. Porter would be the best win on Crawford's résumé by a mile. You can say that Crawford…

When you aren't fighting a midget from a lower weight class or a past it pensioner, the optics might change.

Keith been ducking Spence for years now haha something tells me if they would of fought Thurman will change his tune.

He felt Porters power so I believe his words. Don't think he will tho