Someone is eventually going to be the one.

It just hasn’t happened yet.

Eventually, someone will take over Floyd Mayweather’s place as the best welterweight in the world. Oh, sure, there are fighters who can stake their claim now. Errol Spence and Terence Crawford is probably the fight to clear the matter up for the biggest number of hardcore fight fans.

They look like the division leaders when they’re in the ring.

Neither of them has finished the proof.

Two of the other leading candidates are in the ring this Saturday (Fox Sports PPV, 9 PM EST). Following his 2015 loss to Mayweather, Manny Pacquiao (61-7-2, 39 KO) was still seen by many press outlets as the next best welterweight in class. In the years since, Pacquiao is 4-1 with the loss coming via disputed decision on the road to Australian Jeff Horn.

At 40, and entering his seventy-first pro fight, this slower and more cerebral Pacquiao is assumed by many to almost de facto not be eligible for the spot as best in class anymore. However, if the Horn decision goes his way and all other things stay equal, what are the chances Pacquiao enters the ring this weekend still leading the various independent ratings out there?

Pacquiao has shown that he’s still a world-class fighter. It’s why this weekend is intriguing rather than carrying the air of ritual sacrifice so many clashes between old and newer warriors can be. Pacquiao is still one of boxing’s biggest names, the star of this show heading in, with a chance at the sort of win that could genuinely add to a career legacy already bursting at the seams.

The 30-year old Florida native has done his best sales job for the bout, making for good copy and sound bites in the build to the showdown. After missing almost two years of ring action after a unification win over Danny Garcia in 2017, Thurman is back with a repaired elbow looking to regain momentum inevitably lost to absence. 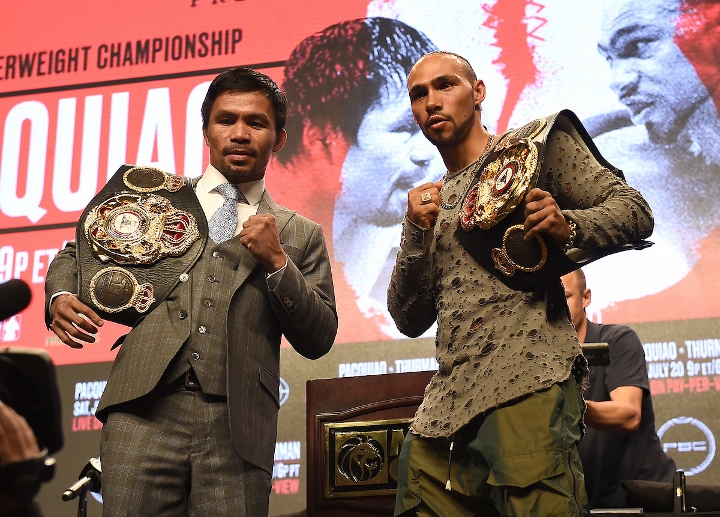 Make no mistake; Thurman had serious momentum in 2017, not just in the ring but outside as well. Beyond Saul Alvarez, Mayweather, and Pacquiao, it’s hard to find a fighter in the United States who could point to the sort of television audiences Thurman had on more than one occasion. The PBC put Thurman in position to be one of their tent pole stars from the beginning.

It was Thurman, matched against former multi-division titlist Robert Guerrero, who was in the main event of the first PBC main event on NBC. The audience came along for the ride with more than 3 million viewers. While the PBC numbers ebbed and flowed, Thurman’s turns on network television showed audience growth and investment. He was and is one of their success stories. His Showtime on CBS battles with Shawn Porter and Garcia grew from event to event with peak ratings during the Thurman-Garcia battle reaching five million homes.

Numbers like those, combined with an opponent as high profile as Pacquiao, should mean a blockbuster on pay-per-view. It would perhaps feel like more of a sure thing without Thurman’s absence from the ring. Fair or not, there was a segment of the fan base that seemed almost to deem Thurman as reluctant to come back. The length of his time away from the ring cost him some benefit of the doubt.

A sometimes-shaky return bout against Josesito Lopez in January raised questions for some about where Thurman is right now. It adds to the drama ahead of this weekend.

It adds to the moment.

It’s easy to forget where Thurman had arrived to in 2017, easy to forget he was the unified WBC and WBA titlist, easy to forget that he and Pacquiao may have the most wins against top ten welterweights in the last four years among their peers. Is Thurman, the man positioned so well by his handlers for eyeballs and stardom all along, going to further the pay off?

That is a different question then whether it completes the pay off. This weekend, if it succeeds on pay-pre-view, already accomplishes that. It is also a different question than whether Thurman assumes the mantle of clear best welterweight in the world, but a win this weekend leads toward that destination as well. For the PBC, a Thurman win organically grows toward a showdown with the winner of this Fall’s Errol Spence-Shawn Porter clash and then, maybe, someone meets in the street between promotions and faces Crawford.

Maybe then, but likely not until…

For now, the Keith Thurman moment is here. Let’s see what he makes of it.

Like many fight lovers, the news of the tragic loss of Pernell Whitaker cast a shadow over the rest of the week. To these eyes, “Sweet Pea” was the greatest fighter to grace the squared circle since Sugar Ray Leonard. Look for a comprehensive review of Whitaker’s career soon in a special edition of the “Measured Against All Time” series…This weekend has a really good undercard for a pay-per-view show. The worst fight on the card might be the Luis Nery-Juan Carlos Payano match. It’s not an indictment. Pound for pound, Nery might be the most talented fighter on the card in 2019…The final season of Legion is as good as the show has ever been. Twenty years from now, it will be interesting to see if it has found the audience it never quite did during it’s initial airing.

[QUOTE=Terrell1555;19909621]Zero is the most important number in any fighters career make no mistake about that, until they lose! However even after a loss every fighter with one loss wants to finish with one loss! They all train there arse off…

Thurman will NEVER take ANY top spot or take over for any great. HE ISN'T.