Keith Thurman agonized like never before from southpaw Luis Collazo’s fifth-round crippling left hand to the liver. But “One Time’s” own left hook at the 49-second mark of the sixth aggravated a cut over Collazo’s right eye, leading the former champion to retire on his stool after the seventh, citing limited visibility from the grotesquely swollen, severely bleeding eye.

The result was a technical knockout for Thurman, who, at 26-0, 22 KOs) after the July 2015 victory, had stopped Collazo for the first time in a career that includes a second-round stoppage win over left-handed former champion Victor Ortiz and route-going losses to Shane Mosley, Ricky Hatton, Amir Khan and Andre Berto.

Six months later, Thurman’s career would become stalled by injuries to his neck and back, right elbow and left-hand over the course of February 2016 though March. The damage limited “One Time” to a pair of title defenses at Barclays Center in Brooklyn, New York, comprised of unanimous- and split-decisions over two-time champion Shawn Porter (June 2016) and two-division title-winner Danny Garcia (March 2017). 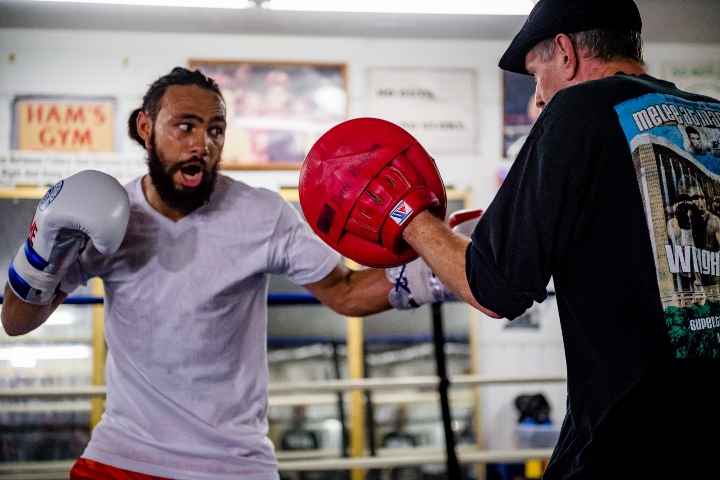 “I was raised by a soldier, Ben Getty. Chop off an arm, chop off a leg, if I’m not dead, we’re moving forward,” said Thurman, 30, referring to his first trainer who died in May 2009 at the age of 63 after battling diabetes.

“That’s where all of my confidence comes from is Getty, and just really knowing the type of warrior that I am. When I fight, I fight to win, and that’s why your boy is, ‘and still’ champion.”

Getty had previously worked with the likes of Sugar Ray Leonard. He started Thurman in boxing at age 7, guiding him to more than 100 amateur victories and six national championships, as well as a professional record of 8-0, all knockouts.

“After Ben died, Keith was devastated because he was like a second father,” said Thurman’s present trainer, Dan Birmingham, best known for his work with former titleholders Jeff Lacy and Winky Wright, and whose assistant is Getty’s son, Chris. “Keith called me the next day and asked me if I would take over, and I said, ‘Of course I’ll take over.’”

Birmingham had his own health scare in November 2012 in advance of Thurman’s fourth-round stoppage of former 147-pound champion Carlos Quintana in Ontario, California.

Thurman improved to 19-0 (18 KOS) with his eighth straight knockout occurring several days after he nearly lost l Birmingham, who several days earlier had been hospitalized with a severe bout of pneumonia.

“Anytime people come through a close call, it always makes you reflect,” said Thurman of Birmingham, who overcame the illness and was released from the hospital in time to make the cross-country flight from Florida to California and work Thurman's corner.

“For the most part, I just look at life as a journey, reflecting on my entire boxing career, the type of fighter I’ve been, all that I am today and will be in the future. Tomorrow’s not guaranteed, so everything now is a blessing.”

The neck and back injuries from the car accident in February 2016 delayed more than 2½ months Thurman’s win over Porter (29-2-1, 17 KOs) in a “Fight Of The Year” caliber WBA title defense.

Thurman next won a unification over Garcia (34-2, 20 KOs), adding Garcia’s WBC crown to his WBA version. But a month later, Thurman had major surgery on his right elbow to remove bone spurs and calcium deposits, requiring months of therapy afterward.

Thurman damaged his left hand hitting the heavy bag in March, aggravated the injury in sparring, and had an MRI reveal bruises to the metacarpal bones in the hand, which also had extensive swelling. Unable to endure in the hand for at least eight weeks, Thurman was forced to cancel a planned May 19 return against an undetermined opponent.

After vacating the WBC’s title in April with the caveat of being able to challenge its reigning champion upon his return, Thurman watched from ringside at Barclays in September as Porter earned his injury-vacated WBC crown by unanimous decision over Garcia.

In the meantime, Thurman knows he’ll be heavily scrutinized while fighting Lopez.

“People will look for the basics: How often does Keith get hit, get countered, look fast, strong or timid? Is he just moving around the ring? Is he just a boxer now? What is he and how is his conditioning? How many punches is he throwing in a round?  Does he look tired? Did he start out strong and then die off?” said Thurman.

“They’re gonna to be watching to see if I have a jab, work the body nicely”? What about the day he gets cut, or the day he gets hit, or will this be the day he meets somebody where that s*** doesn’t work? They can just watch and I’ll do my job, because I’m the dude who is ready for all of those days, too. That’s why I don’t sweat it.””

[QUOTE=Bjl12;19339959]Gamboa Postol Horn, etc. Terrence dominated those guys not hair split decisions. Learn the difference[/QUOTE] [QUOTE=JakeTheBoxer;19340021]Postol and Horn are more proven than garcia and Porter???? I think i am done here. This forum is just crazy.[/QUOTE] [QUOTE=DramaShow;19340066]You being serious?????[/QUOTE] [QUOTE=John…

[QUOTE=John Locke;19340372]Check his posting history. He's new to the sport, most people just ignore what he has to say. I find that is a good approach.[/QUOTE] Yea sounds like a good idea man

[QUOTE=DramaShow;19340066]You being serious?????[/QUOTE] Check his posting history. He's new to the sport, most people just ignore what he has to say. I find that is a good approach.

Postol and Horn are more proven than garcia and Porter???? I think i am done here. This forum is just crazy.