Keith Thurman Explains Why He Vacated The WBC World Title

Unified welterweight champion Keith Thurman has voluntarily relinquished his WBC title while he recovers from the effects of elbow surgery last year and a hand injury he suffered in training camp last month.

After speaking with WBC President Mauricio Sulaiman recently, Thurman decided that he would relinquish the title and open the way for former champions Danny Garcia and Shawn Porter, the two leading contenders for the WBC title, to fight each other for the championship while Thurman made a full recovery from his injuries.

"Due to my rehabilitation from my injuries, I agreed to relinquish my WBC title at this time. I continue to rehab my hand and elbow and I look forward to getting back in the ring this summer. This is a temporary setback and I will be the unified champion once again and look forward to winning back my WBC title as soon as possible," said Thurman. 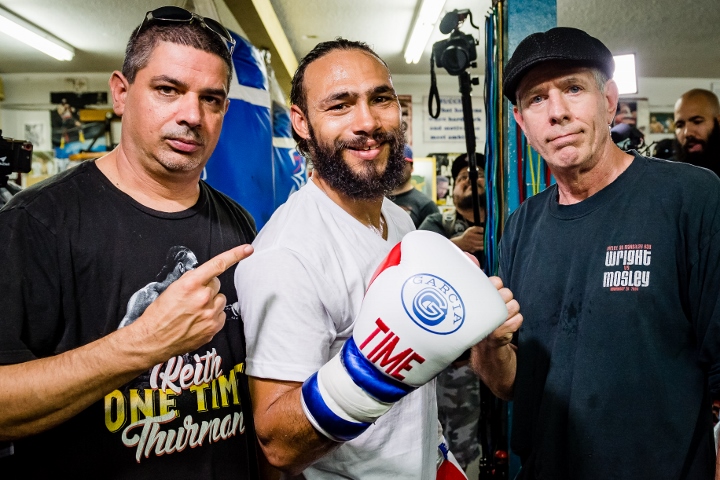 "Keith Thurman unfortunately has suffered two consecutive injuries that have kept him out of the ring after his sensational victory over Danny Garcia and he has graciously relinquished his title, and the WBC has mandated that Danny Garcia and Shawn Porter will fight for the title,'' said Mauricio Sulaiman. "Keith will have a direct path to fight for the title once he has healed just as Vitali Klitshcko and other WBC champions have done in the past. Keith is a tremendous athlete, champion and role model. The WBC will support him completely during this difficult time. ''

Garcia (34-1, 20 KOs), a former unified champion at 140 pounds and the former WBC welterweight champion, lost the WBC title to Thurman by 12-round split decision in 2017. He bounced back with a knockout victory over former champion Brandon Rios in February. The WBC had made that fight a title elimination match, which put Garcia in line to fight Thurman again for the title.

Porter (28-2-1, 17 KOs), a former welterweight champion, lost a close 12-round decision to Thurman in 2016. He became the mandatory challenger for the WBC title when he knocked out Andre Berto last year. He maintained his status with a 12-round decision over Adrian Granados in November.

Thurman injured his neck in a car accident in February 2016, which delayed his match against Porter by three months. When they met Thurman defeated Porter by unanimous decision on June 25.

He defeated Garcia by split decision in a welterweight unification match on March 4, 2017. A month later he had major surgery on his right elbow to remove bone spurs and calcium deposits. He is still in rehabilitation from that surgery.

Thurman injured his hand hitting the heavy bag last month and aggravated the injury sparring with some amateurs at his gym in St. Petersburg, Florida. An MRI revealed bruises to the metacarpal bones in the hand, which also has extensive swelling. Thurman can't have any impact with the hand for at least 8 weeks, which added another delay to his ring return.

He now hopes to return to the ring in the late summer or early fall.

[QUOTE=factsarenice;18705965]Keith doesn't live in NY nor does he have expensive needs. He rides a bicycle, gets his hair cut at a barber, he's the guy next door. $4 million in rentals in Clearwater would more than support Keth's life style.[/QUOTE]…

[QUOTE=Butch.McRae;18705126]Much respect for a balanced and reasonable response. My only point was that some athletes are unique and are really responsible with their earnings. You have guys like Kirk Cousins driving an old pick-up truck while clearing $20 million per…

[QUOTE=Butch.McRae;18704942]And how much money do you need to "sail off into the sunset" exactly? Lol Without knowing his current quality of life, there's no way to answer that question. Keith Thurman has likely made NFL first round draft pick money…

[QUOTE=Noelanthony;18704687]Bro you are spiteful😂 you want to leave him with nothing? lol[/QUOTE] Lol. I hear you. On a serious note, I like Keith but it seems he is going though issues most likely not of his making, making it impossible…

[QUOTE=KayDub;18705100]10% cut to Haymon off the top, ~10% to his trainer, costs and fees associated with being a boxer that will eat into that. Then you have to consider this is all income, so he's hitting some top tax brackets.…