Keith Thurman To Errol Spence: Fight Me Or Leave The Division!

Keith Thurman is not interested in filler fights, as he wants to jump right into the thick of the welterweight division once PBC resumes back in staging big-time shows.

The 31-year-old Thurman (29-1, 22 KOs) wants his comeback contest to be yet another tough test in which he’d be an underdog in, as he’s calling out the top 147 pounder in the sport by challenging Errol Spence Jr.

“I’m ready to get back in with all this competition,” Thurman told PepTalkUK. “My mind mentally would love a rematch [with Manny Pacquiao]. I think it’s a worthy rematch and a deserved rematch. It’s an epic fight … It’s whatever doors will open. If I have to fight a Shawn Porter, Mikey Garcia, Danny Garcia. I’d be surprised if Errol Spence hops on the table right away, but there are so many opportunities.

“It’s hard for someone to show me an opportunity and watch me say no. I could maybe take a tune-up. But I like great fights and significant challenges. Whoever, I fight, I know there’s going to be a following. I want to make it worth my while … Those training camps are not easy. I want my opponent to be worthy of all the pain and suffering that is involved in the whole event for it to be really worthwhile.” 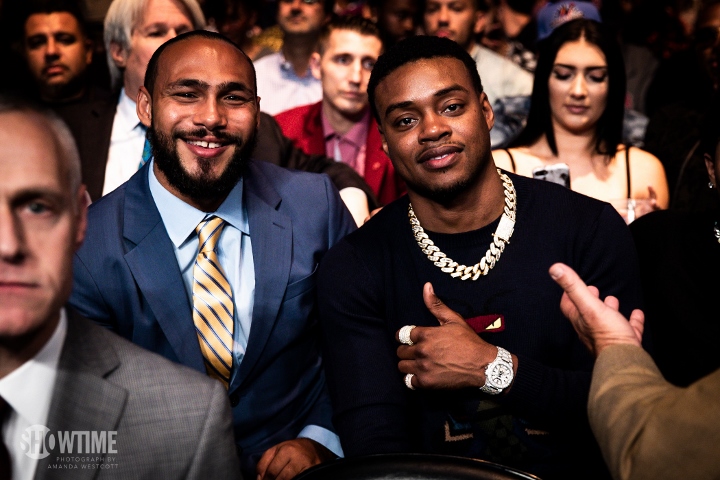 Thurman is not convinced the WBC and IBF welterweight champion Spence Jr. will entertain the idea of fighting him.

“Everyone is gunning for him, and if he wants to stay champion, he’s going to have to answer to everybody or follow after his predecessor and dodge everybody and pick who he chooses,” Thurman said. “He’s faced some of my competition, but he’s never faced me. I did that with Errol when he fought Shawn Porter. I got a lot of people that think the way I beat Porter was better.

The Tampa-based Thurman has been sidelined for nearly a year recovering from hand surgery after the split decision Pacquaio loss, and then taking the mandated break caused to Covid-19. But he still has a sea of options at 147.

In addition to his desired bout with Spence Jr. and rematch with Pacquaio, Thurman can also engage in rematches with Garcia and Porter, both of whom he’s decisioned in the past.

Thurman can also face such PBC stablemates as Yordenis Ugas, Jamal James and Sergey Lipinets, provide Terence Crawford the toughest task of his career and even travel overseas for a fight with Kell Brook.

[QUOTE=Rome-By-Ko;20665590]Of course cause none will flight him(Crawford)..Hell Pac wanted none and Mikey wanted none..I really hope we can see Crawford vs Spence either Garcia's Pac or Thurman..[/QUOTE] this the same pac that said he had no interest in making pac/crawford....until…

[QUOTE=Curtis2;20666123]PBC WW's & Al Haymon straight up clowns...tell me how D Garcia is in line/deserving fight vs Spence when: Porter beat Garcia, Porter vs Spence could have been decision of draw, Garcia fights with Granados & RedKach after loss to…

[QUOTE=Curt Henning;20664862]every pbc WW has a better opponent list/resume than "dud"[/QUOTE] PBC WW's & Al Haymon straight up clowns...tell me how D Garcia is in line/deserving fight vs Spence when: Porter beat Garcia, Porter vs Spence could have been decision…

[QUOTE=Curt Henning;20664862]every pbc WW has a better opponent list/resume than "dud"[/QUOTE] Of course cause none will flight him(Crawford)..Hell Pac wanted none and Mikey wanted none..I really hope we can see Crawford vs Spence either Garcia's Pac or Thurman..