NEW YORK – Keith Thurman survived 12 rounds with “The Riverside Rocky” in his long-awaited return to the ring Saturday night in Brooklyn.

Thurman remained unbeaten against Josesito Lopez by winning a majority decision in a captivating welterweight title fight that was much more competitive and compelling than the one-sided odds suggested. The 30-year-old Thurman (29-0, 22 KOs, 1 NC) was consistently listed as a 50-1 favorite over Lopez by various Internet sports books, but Lopez nearly knocked out the WBA “super” world welterweight champion in a stunning seventh round.

“He had me buzzed and shaken up in the seventh round,” Thurman said, “but I tried to stay on the outside, away. I was a little off in my prediction of how long his arms were. He lunged in and was really willing to commit to the knockout.”

A determined Thurman commendably withstood Lopez’s onslaught in the seventh round, which Thurman lost 10-8 on all three scorecards. The 30-year-old champion came back to make the remaining five rounds close and mostly interesting, and he pulled away, according to two of the three judges.

“He came right for me,” said Thurman, who fought for the first time in 22 months. “I said you wouldn’t see the best Keith Thurman tonight, but you’d still see a world-class performance, and I gave you that tonight.”

As much as rust might’ve been an issue for Thurman, nearly getting knocked out by a huge underdog that had been stopped three times will negatively impact Thurman’s standing within the loaded welterweight division.

The 34-year-old Lopez, who got up from a second-round knockdown, took countless overhand rights and sneaky right uppercuts from Thurman during the remainder of a “PBC on FOX” main event that helped draw a crowd of 9,623 to Barclays Center. 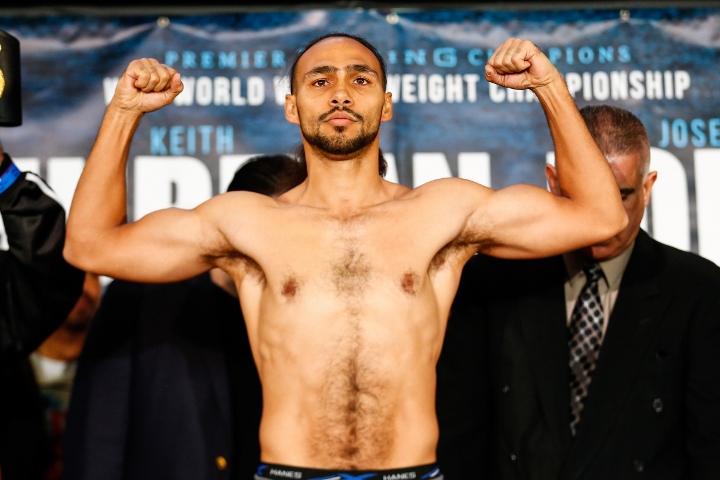 Lopez (36-8, 19 KOs, 1 NC), of Riverside, California, tried his hardest to hurt Thurman again and connected with several right hands that made Thurman retreat, right up until the final bell. A gutsy Thurman made it to the final bell, however, and moved on toward more meaningful, profitable fights.

Once 12 largely enthralling rounds had ended, two judges scored their 12-round fight for Thurman.

Judge Tom Schreck scored a seemingly more competitive fight 117-109 for Thurman. Judge Steve Weisfeld had it 115-111 for the champion.

“I definitely thought I held my own in that fight,” Lopez said. “I had him hurt in the seventh round and I was landing a lot of clean shots on him.”

Thurman, of Clearwater, Florida, fought for the first time since he defeated Danny Garcia (34-2, 20 KOs) by split decision in their 12-round welterweight title unification fight nearly two years ago at Barclays Center. After beating Garcia in March 2017, Thurman underwent surgery to remove bone spurs from his right elbow the following month and suffered a hand injury last year that extended an already lengthy layoff.

It initially looked like Thurman would prove handicappers correct Saturday night. He knocked down Lopez in the second round and seemed set to cruise to a convincing victory until the seventh round.

That’s when an opportunistic Lopez hurt Thurman with a straight right hand that completely changed the course of their fight. Lopez pummeled Thurman with rights and lefts throughout the remainder of the seventh round, when referee Steve Willis took a close look at how a backtracking Thurman reacted to Lopez’s punches late in it.

Thurman moved around the ring and somehow survived severe trouble during that seventh round, but barely even attempted to hold to neutralize Lopez.

His one-minute rest between rounds woke up Thurman, who started the eighth round strong to temporarily stop Lopez’s momentum.

“I was disappointed I couldn’t finish him and get him out of there,” Lopez said. “If he thinks he’s the best welterweight out there, then I want two through five lined up for me.”

Lopez clocked Thurman several times during the ninth round as well. Thurman landed several right hands in the ninth, too, but Lopez kept pressing forward.

Before their fight completely changed, Lopez unloaded hard shots to Thurman’s head and body with about a minute to go in the sixth round. That flurry stopped Thurman from punching temporarily, but by the end of the round the champion had landed several hard right hands of his own to Lopez’s head.

Thurman and Lopez landed powerful right hands just before the end of a competitive fifth round.

The fourth round began with tremendous action, as Thurman and Lopez unloaded punishing power punches, several of which landed for each fighter. Thurman’s right uppercut during that exchange appeared particularly damaging.

Lopez backed up Thurman with a combination late in the fourth round. Those punches seemed to get Thurman’s attention.

A hard left hook to the body by Lopez landed with 45 seconds to go in the third round. Thurman took that shot well, kept coming forward and threw numerous power punches for the remainder of the round.

A step-back left hook by Thurman dropped Lopez with about 20 seconds to go in the second round. Lopez’s head snapped back, and the challenger went down to his gloves and knees.

Though buzzed, Lopez beat Willis’ count. Thurman attempted to finish him off and landed another right hand that caused Lopez to try to hold.

Thurman eventually ran out of time, though, to score a quick knockout.

Thurman appeared sharp during the opening round, despite that it marked his first official action in nearly two years. He moved well, landed several right hands and controlled the distance.

Lopez appeared to catch him with a shot late in the first round that made Thurman move away from him.

Wow! That was a great fight! Lopez did superb, respect to him and Thurman. Excellent win for Thurman!

[QUOTE=AdonisCreed;19466091]Thurman needs to learn how to hold when he's in trouble!! He's lucky that was Lopez and not a top guy! Thurman struggles with C level guys like Lopez and Collazo and does good against top guys SMH lol[/QUOTE] Thurman…

[QUOTE=LoadedWraps;19468301][FONT="Verdana"][COLOR="Navy"]#DubNation We out-chea dealing with heavy hate bruh, Dubs just keep winning. 5 All-Stars starting and a former all-star/FMVP coming off the bench like true savages. LMAO. Warriors glitched the NBA. LeQuit might as well just retire he will never…

[QUOTE=doom_specialist;19466925]I don't know his lifestyle, but he may be content to earn $1M-$2M a fight retiring gatekeepers. I want him to fight Spence, but he really didn't look ready to me. He's gonna need some cardio.[/QUOTE] As fighter-friendly as Haymon…