It’s easy to feel like the boxing year is over in the United States. FS1 will have intriguing Cuban prospect David Morrell continuing his rapid ascent at super middleweight and the return of James Kirkland on Saturday night but nothing there feels like it really moves the immediate needle.

Various sites and podcasts have already begun signing off on their ‘honors’ for the years, signalling their end to a year when boxing made lemonade from a hell of a lot of lemons.

Hardcore fight followers have learned: a year is never over until the clock strikes twelve on New Years Eve. While quality can vary, there is typically a big card or two in Japan on the final day of the year. 2020 is no exception.

This year, before anyone can be sure we’ve seen the best fight of the year (and, admittedly, Jose Zepeda-Ivan Baranchyk will be hard to top), there is an exceptional fight worth waiting for and it comes in a division still in the midst of arguably it’s finest era.

In Tokyo, Japan’s 31-year old Kazuto Ioka (25-2, 14 KO) will attempt to defend the WBO belt at Jr. bantamweight for the second time. It is Ioka’s fourth belt in as many weight classes. A professional since 2009, Ioka captured his first belt at strawweight in only his seventh start from Oleydong Sihtsamerchai and partially unified the division in his tenth against Akira Yaegashi.

While Ioka hasn’t been as dominant as countryman Naoya Inoue, Ioka’s only losses have come to high quality battlers Amnat Ruenroeng and Donnie Nietes while adding strong wins against the likes of Juan Carlos Reveco, Felix Alvarado, and McWilliams Arroyo. Ioka has so far missed opportunities against Roman Gonzalez, Juan Francisco Estrada, or Srisaket Sor Rungvisai. A win to end 2020 could open the possibilities for unification in 2021 with at least one of those men.

The lineal king at the moment, Estrada (41-3, 28 KO) will engage in a long awaited rematch and attempt to unify his WBC strap with the WBA belt against Gonzalez (50-2, 41 KO) in March. The winner is mandated to defend against the two-time former WBC and former lineal champion Sor Rungvisai (49-5-1, 42 KO). When the smoke clears, Ioka could be in prime position to challenge whoever emerges in pursuit of a defining win.

The man across the ring on New Year’s Eve will have more than a little something to say about that. 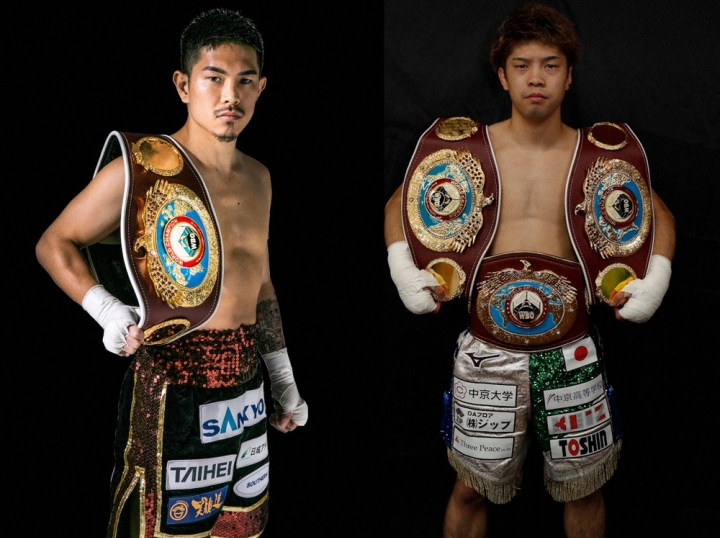 Japan’s 25-year old Kosei Tanaka (15-0, 9 KO) will try to accomplish in just sixteen fights something it took Ioka until his 26th to pull off. As fast as Ioka’s timeline was, Tanaka’s has been a little faster. He won the WBO belt at strawweight in just his fifth start, won the WBO belt at Jr. flyweight in his eighth, and then snared the WBO belt at flyweight in his twelfth. Wins over Sho Kimura, Moises Fuentes, Angel Acosta, and Ryoichi Taguchi lend substance to the accomplishments and his style is as fan friendly as it gets. Tanaka’s offensive mindset might not make for a long career but it’s been damn watchable.

Sure, it’s easier to win belts in multiple divisions than it’s ever been between the most recognized sanctioning bodies and sometimes unbelted lineal crowns. Tanaka would join Leo Gamez, Gonzalez, Nietes, and Ioka in winning belts from 105-115. The last three all did it in the same era and only have one fight between them. It doesn’t detract in the moment from the fun of what Tanaka is attempting. That Tanaka could pull it off against a proven, solid veteran would only make it more impressive.

No fighters, in any collection of divisions, have ever won belts in four classes with so few fights. The next closest would be Oscar De La Hoya who won belts from Jr. lightweight to welterweight in his first 24 fights.

A win does more than add to Tanaka’s trophy case. It also opens the door for him to be a viable unification opponent for any of the names mentioned before or even IBF titlist Jerwin Ancajas (32-1-2, 22 KO). Only 28, Ancajas has become almost a forgotten man at Jr. bantamweight. One would assume there will come a point where Ancajas won’t stay in the position of watching the trains roll by.

Tanaka is a star at home. A win next week could force the world to start to take notice of his talents in a way only Inoue among Japan’s best is currently enjoying.

Tanaka has to get by Ioka first and on paper it’s the stiffest challenge of his career. Put aside the belts and the fight loses no luster. Ioka is rated third by both TBRB and Ring at Jr. bantamweight. Tanaka is rated number one by both at flyweight. Win or lose, Tanaka makes one of boxing’s best weight classes deeper. It’s among the better fights that can be made below bantamweight.

While no major US outlet has picked the fight up yet, time remains to correct that error. YouTube will likely be there after the fight as an alternative. Can the fundamentals and experience of Ioka tame the energy and output of Tanaka? It’s going to be a blast finding out.