Kavaliauskas: My Draw With Ray Robinson Was 'Bullsh-t'

NEW YORK – He didn’t even win his last fight.

That’s the most common complaint among those disinterested in Terence Crawford’s welterweight title defense against Egidjius Kavaliauskas. In his previous appearance, Kavaliauskas settled for a 10-round majority draw with Ray Robinson.

The Lithuanian contender still hasn’t been beaten as a professional. The WBO kept Kavaliauskas as its mandatory challenger for Crawford’s crown because he didn’t lose to Robinson. 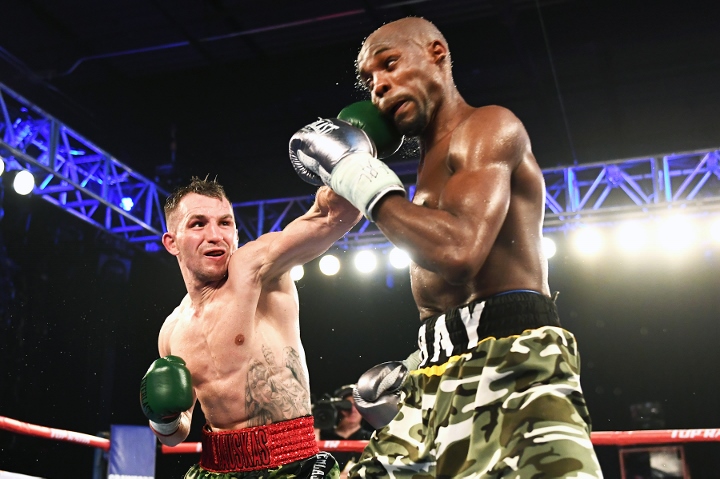 Kavaliauskas acknowledged that he wasn’t at his best when he boxed Robinson. The fighter nicknamed “Mean Machine” still couldn’t believe one judge scored their fight for Robinson (97-93) and the other two had it even (95-95, 95-95) on March 30 at 2300 Arena in Philadelphia.

“The word in my head was bullsh-t,” Kavaliauskas told BoxingScene.com before a press conference Wednesday at Madison Square Garden. “I knew I won the fight because how can you win the fight if you just try to survive and try to run in all the rounds? Yeah, it was upsetting, and I was kind of sad from that fight. But that fight has already passed, so I’m not looking back, I’m looking forward.”

Promoter Bob Arum’s matchmakers put Kavaliauskas in the ring against Robinson (24-3-2, 12 KOs) because they wanted to learn how he’d fare facing a southpaw. Crawford technically is an orthodox boxer, but the Omaha, Nebraska, native fights from a southpaw stance most of the time.

“I didn’t think the other guy would be so crafty in the ring,” Kavaliauskas said. “He was just running and moving in the ring. That was not my best performance in that fight, yeah. But we learned that some guys will run. They’re not gonna go and fight with me because they know that I have power. So, guys will run and I need to chop them down, little by little, step by step, round by round, not just try to go there. Crawford’s a great champion. He’s not gonna run. He’s gonna fight with me.”

Crawford hasn’t seen the Kavaliauskas-Robinson bout, thus he couldn’t offer an opinion on who won. Nevertheless, Kavaliauskas doesn’t think Crawford is overlooking him because he fought to a draw with Robinson, who has been stopped by Yordenis Ugas.

“I don’t think he’s underestimating me,” Kavaliauskas said. “That’s why he’s a great champion, because when he looks at his opponents, he’s 100-percent focusing on them. He gets ready for all his opponents, so I think he will be 110-percent ready for me.”

Robinson taxed that azz; what this dude smokin?

I scored that fight for Robinson.