Kavaliauskas-Arriaza Winner Could Be Next Foe For Crawford

OMAHA, Nebraska – Bob Arum admits he would rather match Terence Crawford against Errol Spence Jr. or another welterweight champion next.

In the likely event that typical boxing obstacles prevent any of those fights from happening next, Arum acknowledges that Egidijus Kavaliauskas is toward the top of the list of Crawford’s possible opponents in 2019. Like Crawford (35-0, 24 KOs), Lithuania’s Kavaliauskas is promoted by Arum’s company, Top Rank Inc.

The 30-year-old Kavaliauskas (20-0, 16 KOs) could make an upcoming shot at Crawford’s WBO welterweight title even more likely by winning a 12-round, 147-pound elimination match November 16 in Oklahoma City, Oklahoma. 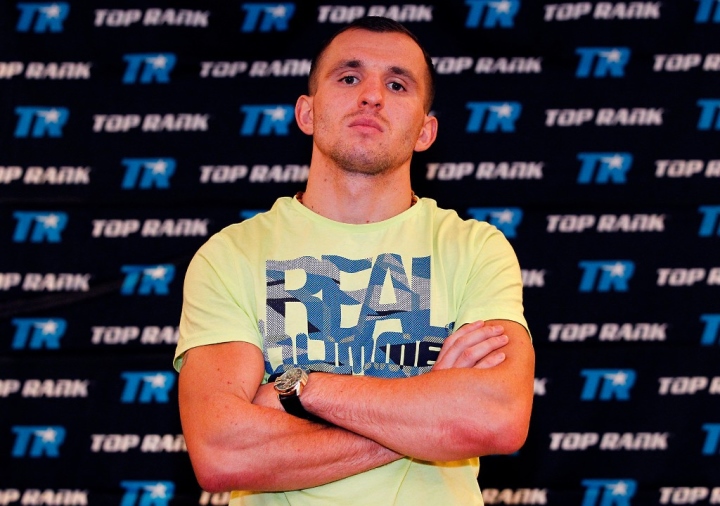 Kavaliauskas will encounter Nicaragua’s Roberto Arriaza (17-0, 13 KOs) that night in a bout ESPN+ will stream as part of the Maurice Hooker-Alex Saucedo undercard. Dallas’ Hooker (24-0-3, 16 KOs) will make the first defense of his WBO junior welterweight title in the main event that night against Oklahoma City’s Saucedo (28-0, 18 KOs), his mandatory challenger.

Kavaliauskas is ranked No. 2 by the WBO among its welterweight contenders. The unbeaten but untested Arriaza, 28, is rated No. 7 by the WBO.

‘Kavaliauskas is fighting in an eliminator,” Arum said after Crawford stopped Jose Benavidez Jr. in the 12th round Saturday night at CHI Health Center. “Would I prefer [Crawford] to fight a Spence? Yeah. And would I prefer him to fight one of the other guys that has a title? Sure. Because those are clearly bigger fights … so absolutely, I would do those fights.”

As for Kavaliauskas, Arum added, “I think he’s very good. But this Besputin might turn out to be better. They’re stablemates, but Besputin is coming on pretty good. So we’ll see. [Carlos] Adames may be more comfortable as a super welterweight/junior middleweight. He looked pretty good. He’s a good-punching son-of-a-gun.”

Russia’s Alexander Besputin is 11-0 and has nine knockouts. The 27-year-old welterweight is promoted by Top Rank as well.

The Dominican Republic’s Adames (15-0, 12 KOs), also promoted by Top Rank, stopped Joshua Conley (14-3-1, 9 KOs) in the second round on the Crawford-Benavidez undercard Saturday night. The 24-year-old Adames’ past three fights have been contested above the welterweight limit, but Arum said he still can make 147 pounds.

I wouldn't mind seeing Crawford against Jaron Ennis. Ennis says he'll be ready for the best next year. That would be a good fight for Crawford.

I dont mind this fight to be honest

Kavaliauskas, Besputin, and Adames! That's the future for Terence Crawford! Get used to it!

[QUOTE=Motorcity Cobra;19194936]You're saying he's better off fighting Horn than Spence, Porter, Garcia, and Thurman? You're a ****in fool. You say some stupid **** most of the time but today you topped yourself. This is something I wrote a topic about…

[QUOTE=Motorcity Cobra;19194906]It's not a waste of time. It sets up a fight with the people on the other side of the street he wants to fight. Was he better off fighting Horn for the WBO belt and possibly never fighting…