Kautondokwa: Don't Underestimate Me; I Didn't Just Fall From Sky!

Walter Kautondowka warned anyone making the mistake of thinking he doesn’t have a shot to upset Demetrius Andrade on Saturday night.

The unknown, unbeaten Namibian contender has fought a low level of opposition on his way to securing a shot at the vacant WBO middleweight title. He assured skeptics, though, that he is more than ready to take this steep step up in competition against Andrade at TD Garden in Boston (DAZN).

“That’s the spirit of some people in the sport,” Kautondowka told BoxingScene.com. “They underestimate other people just because you don’t know the person. But that doesn’t matter because for me to be where I am, I didn’t just fall from the sky to be where I am. To be ranked is because the world knows me. Because they don’t know me doesn’t mean the whole world doesn’t know me. That’s why [the WBO] rated me to be No. 2 in the world.” 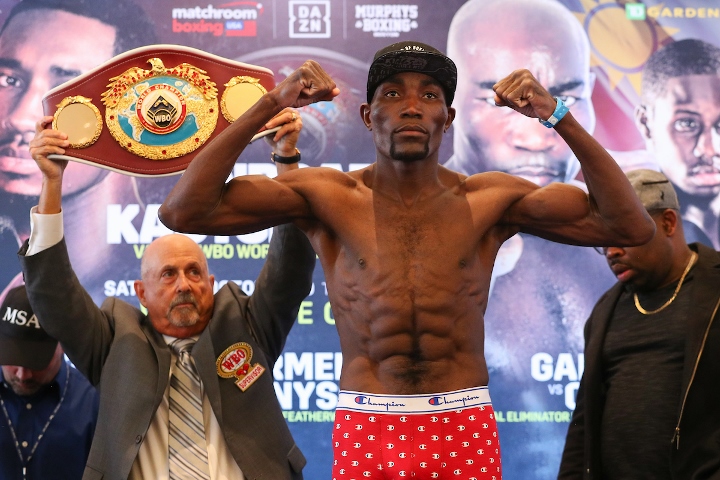 The top-ranked Andrade (25-0, 16 KOs), of Providence, Rhode Island, and the second-ranked Kautondokwa (17-0, 16 KOs) will fight for the WBO 160-pound championship Billy Joe Saunders gave up last week. The Massachusetts State Athletic Commission denied Saunders’ application for a license to fight Andrade on Saturday night during its meeting October 9 because Saunders failed a Voluntary Anti-Doping Association test for a banned stimulant late in August.

Saunders (26-0, 12 KOs) then vacated his title. The WBO subsequently sanctioned Andrade-Kautondowka as a 12-round fight for its vacant middleweight championship.

Kautondowka, 33, has fought exclusively in Africa since making his pro debut in October 2013. Sixteen of his 17 fights have taken place in his native Namibia and one occurred in Ghana.

Andrade, 30, is a two-time 154-pound champion. The 6-feet-1 southpaw hasn’t fought since last October 21, but he is listed as at least a 12-1 favorite over Kautondowka by most Internet sports books.

Kautondowka called Andrade “a really good fighter,” but he isn’t concerned about boxing by far the best, most accomplished opponent of his career.

“I don’t really care,” Kautondokwa said. “What I know is this is boxing and this fight is just different because it’s for a world title. But I see it as the same, like other fights, meaning when I look at the fight and Andrade, I’m not like, ‘Andrade is too tough,’ or, ‘He’s wide and tall.’ It’s the same. It’s boxing.”

These mystery men who pad their records fighting bums generally fall on their faces when they suddenly take a giant leap in class.

Rooting on the upset cuz Andrade is just gonna f#ck up his opportunity at some future date anyway I bet + its always more interesting when the completely unknown mfer wins. But odds are Andrade is gonna be too much,…

I really hope Kautondokwa puts up a good fight . I was looking forward to Andrade / BJS .

U didnt come from the sky you jumped right off of the western part of anthony joshuas africa tatoo!!! Hearn is god!!!!

Good luck to Kautondokwa he has the true Africa lion warrior.