Though middleweight punchers Walter Kautondokwa and Kanat Islam delivered on the premise of an action-packed battle between world-ranked contenders, the fight is still in centre position of talks between fans and journalists around the world because of the highly questionable decision that concluded the action.

The two hard-hitting 160-pounder headlined a celebrated show in Almaty, Kazakhstan and locked horns for the WBO International title this past Saturday.

Islam (27-0, 19 KOs) had the edge after the first few rounds thanks to some nicely landed left hooks. In round five, the fighters traded left hooks and it was the Kazakh fighter who landed sooner by a split second, dropping Kautondokwa to the canvas. The tall Namibian got up, regained his senses and kept coming at his shorter opponent who unsuccessfully tried to gain further advantage from the knockdown. 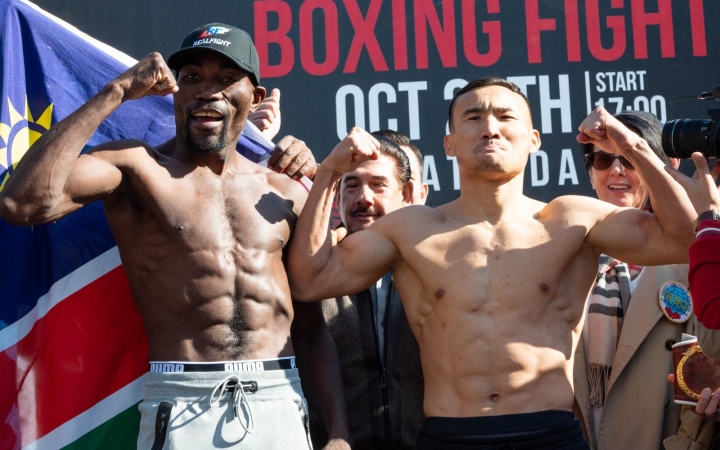 Round six, however, was all Kautondokwa who found his rhythm and used his well-placed jabs and left hooks to keep his opponent at bay. From that point on, Islam was never in the fight, and by round nine, there were moments where he almost collapsed from fatigue.

Still, following the final bell, judges scored the bout 99-92 and 97-92 twice, all for the hometown fighter. The latter score means two of the judges gave only three rounds to the Namibian. The third judge gave only one round to the visiting pugilist while he seemingly scored two rounds even.

“It was a very competitive fight between two world-rated boxers. I think they both started very well, and Islam stole three good rounds and caught Walter with a good shot, but he was not hurt and that's why he recovered so quickly and well. From there it was all Walter and it was clear that Kanat couldn't handle his power. I clearly had Walter winning this fight even with the knockdown because he dominated all the way and won most rounds,” said Kautondokwa’s promoter, Nestor Tobias to BoxingScene.com following the fight.

The Namibian businessman can’t help but think the judges were in some way manipulated by Islam’s partial success in round five alone.

“Walter got caught [in the fifth] but that was the only highlight of the fight for Islam. This fight was 10 rounds, but the judges clearly scored it on the knockdown only. We have seen good fights where boxers knocked down even 3 times and they come back and win the fight. What is strange about this fight is Islam didn't provide much and that was his only big moment.”

“We felt betrayed by the system. We invest so much in the sports and then they treat you like this so far away from home. Look, even Kanat knew he lost the fight,” said Tobias, referring to the body language of the Kazakh fighter and his team following the final bell.

“We had big plans for Walter after this fight and then you have three judges who think they can do as they please and take away our dignity in the manner in which they did. We are very disappointed,” concluded the promoter, who is planning to take actions toward the World Boxing Organization to get compensation for his fighter as soon as possible.

Kanat islam is from Kazakhstan, fight took place in Kazakhstan. It was a gift decision. Even kazakh people are saying that it was a robbery. Following text is translated by google-translate: Kazakhstan fans are shocked by the unfair victory of…

Anyone going to suggest that religion was an issue with the judges? Or would that be racist or something.

[QUOTE=Satir;20150805]Kanat lost this fight, was just running from 6th to 10th round not landing anything, was ugly to watch, he was small for super welter, now he's just a midget at 160, doesnt belong to this division[/QUOTE] Literally running and…

Kanat lost this fight, was just running from 6th to 10th round not landing anything, was ugly to watch, he was small for super welter, now he's just a midget at 160, doesnt belong to this division

So this is a boxing forum and no-one has any comment on this? You're all saying something when GGG or canelo are mentioned but true fringe contenders having a war is of no interest. That's interesting. I thought you were…