Kautondokwa Is Eager to Face Billy Joe Saunders in September

The boxing world is already pumped for arguably the most important real super fight that takes place between Saul Alvarez and Gennady Golovkin on September 16 in Las Vegas. The get-go is on for the WBC/WBA/IBF/IBO/Ring/Lineal middleweight titles. The only missing link is the WBO strap that belongs to unbeaten Billy Joe Saunders.

The British fighter is expected to have a target on his back for the winner of Alvarez-Golovkin in order to give fans an old-school undisputed championship fight. Saunders (24-0, 12 KO’s) seems to hit the jackpot though he also has one more bout before a potential all-belt-unification against either star. Billy Joe is scheduled to defend his WBO title for the second time on the same September date as the mega bout of his more celebrated counterparts.

A logic path for Saunders would be an easier (or thought to be easier) defense against one of the rated fighters by the WBO to keep himself active until he can secure the big one. Names of potential challengers arose in the last couple of weeks but there is no opponent announced for the September return for Billy Joe as of yet. 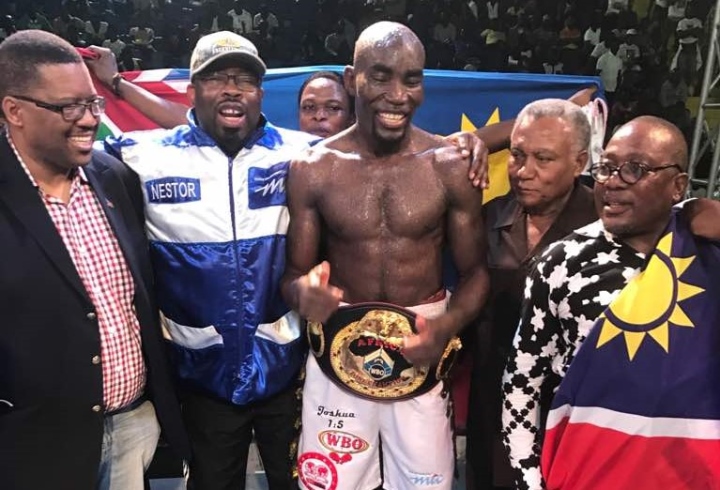 The new kid in the neighbourhood who is trying to get the chance to shine against Saunders is hard-hitting prospect Walter Kautondokwa (15-0, 14 KO’s). The WBO #10 ranked Namibian has just won an important all-African matchup in Ghana against fellow rated Obodai Sai with an impressive fifth-round stoppage and he is already talking about a future bout against the middleweight titleholder.

”Saunders has an impressive record of 24 fights and he is undefeated which speaks well of his pedigree. He has only defended his title once, and I think he needs a credible and powerful opponent like myself if he is to prove his worth,” said Kautondokwa to BoxingScene.com. ”Despite the respect I have for Saunders, I can face him anytime, anywhere. I do not just think I am ready to face him, but I know so. He has done well to become a champion, but I don’t think he has faced an opponent like me before.”

If one checks the record of Walter on BoxRec, it looks so thin he seems to be a prospect at best without any major experience against tougher opposition. One should look behind the numbers to see the full picture about the unbeaten African pugilist. The 5 foot 11 inches Kautondokwa is a rangy fighter with decent footwork. He is considered probably the biggest puncher among African fighters with cracking power in both hands. And above all, he believes in his skills and is confident in his win of a potential world title bout with Saunders.

”Look, this is how it will go down: at the end of the fight, if the bout anyhow goes the distance, Walter Kautondokwa will be the new WBO middleweight world champion, because he has the power and durability to finish off Saunders. I am not bragging when I say this, but I know I can beat Saunders and if the fight was to happen, he must be prepared to give up his championship status,” discussed the undefeated Namibian.

The manager/promoter of Kautondokwa, Nestor Tobias is also confident about his fighter’s chances in a bout against Saunders. The businessman is best known for building fellow Namibian Julius Indongo from unheralded prospect to WBA/IBF/IBO unified super lightweight champion in less than four months this year. When Tobias considers one of his athletes ready to go for a title, the fighter is more than ready to rise to the occasion.

”I have always said that Walter is our best-kept secret in the middleweight division, and the world will be excited to see him on the international scene. The boy is big, very fit and he has incredible power, arguably one of the hardest hitting boxers in the middleweight division in the whole world. Walter is very talented and hungry for success. We have literally run out of opponents for him in Africa and it is now time for him to conquer the world and the middleweight division. So if you want to see his punching power, just out him in the ring with Saunders,” said Tobias who has given the tiny African country with a population of less than 2.5 million three world champions so far.

Nestor is positive Kautondokwa could be the next in line for Namibia on the world championship scene.

”Against Saunders, only two things can possibly happen, it’s either he wins by TKO or if the fight goes the distance, he will win by unanimous decision. That is the only reasonable prediction at the moment even though we know anything can happen in boxing.”

One thing is certain. This would be a helluva matchup stylistically between an experienced, well-skilled boxer in Saunders, and a powerful boxer-puncher in Kautondokwa. It could hold a good price/earnings ratio for Frank Warren, promoter of the British titleholder. They get an unbeaten, inexperienced fighter who is nothing more than just a prospect at the world stage. The Namibian challenger would test the stamina and the chin of Saunders that would serve him well in a future mega bout while Billy Joe would also get the lion’s share at the box offices.

It would also be a big opportunity for the Namibian contingent. Kautondokwa would secure his dream to fight for the title and a possible win could put him into position for a super fight against the winner of Canelo-GGG.

There is not too many available opponents for Saunders for September 16. Saunders vs Kautondokwa definitely looks like a good matchup for the record.

[QUOTE=deanrw;17792830]Walter Chumbawamba is a great fighter. He has a reputation of getting knocked down, but he gets up again. He was quoted as saying "nobody keeps me down".[/QUOTE] [IMG]https://media.tenor.co/images/51c2edba4ac5fdeb39aa79093bc8de20/raw[/IMG]

[QUOTE=Eff Pandas;17793099]I've also heard post fight he likes​ to drink a Whiskey drink, a Vodka drink, a Lager drink & a Cider drink before singing songs that remind him of good times. Sounds like some alcohol company endorsement is for…

[QUOTE=deanrw;17792830]Walter Chumbawamba is a great fighter. He has a reputation of getting knocked down, but he gets up again. He was quoted as saying "nobody keeps me down".[/QUOTE] I've also heard post fight he likes​ to drink a Whiskey drink,…

[QUOTE=BigZ44;17790632]I have 1 question, who the **** is Walter Kautondokwa???[/QUOTE] Walter Chumbawamba is a great fighter. He has a reputation of getting knocked down, but he gets up again. He was quoted as saying "nobody keeps me down".