Katie Taylor is prepared to move from a long-craved showdown onto a long-desired rematch.

The unbeaten lineal lightweight champion from Bray, Ireland remains on course to defend her crown on August 22, though very likely no longer against record-setting seven-division titlist Amanda Serrano (38-1-1, 28KOs). Instead, a rematch with Belgium’s Delfine Persoon (44-2, 18KOs) has emerged as the likely scenario for a card scheduled to take place on the property of Matchroom Boxing headquarters in Brentwood, Essex, England.

The bout would come more than 14 months after the two collided in their four-belt unification last June at Madison Square Garden in New York City. Taylor (15-0, 6KOs) roared out to an early start before having to fend off a strong second half surge from Persoon to claim a 10-round majority decision. The verdict was met with mixed reaction, with several experts believing Persoon deserved the nod. 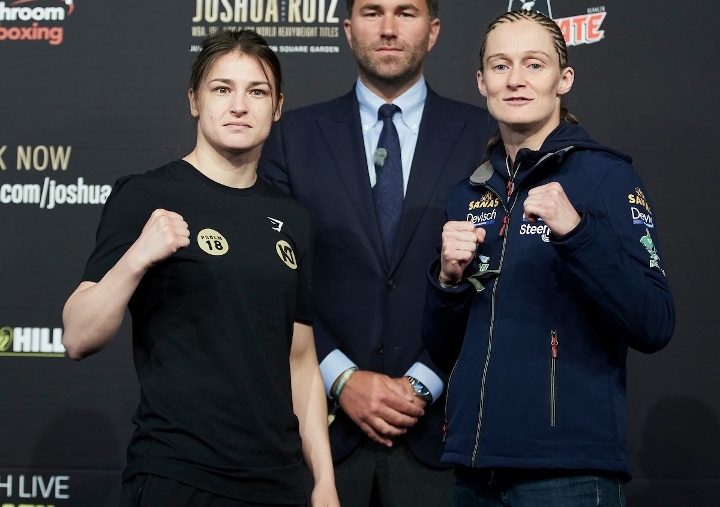 All told, it resulted in Taylor making the seventh defense of at least one lightweight title (WBA) which she’s held since 2017. For Persoon, it was the end of a lengthy WBC title reign spanning nine successful defenses in more than five years—and with both participants eager to run it back.

That day of arrival now appears within reach.

“It’s a much bigger fight because of the controversy from the first fight,” insists Hearn. “Katie wants to take that fight because there is doubt in some people’s mind that she won that fight. So now, it’s a fight like all these fights in the world that deserves sold-out crowds in an arena. But we don’t live in that world anymore. If you’re a fighter, if you care about legacy and achievement, you have to adapt to this environment. You have to go for it.”

“Katie don’t want to wait. She’s been ordered by the WBA, she hasn’t made a mandatory since she won the title—it’s been unification after unification,” points out Hearn. “She wants Persoon, she wants Serrano, she wants Braekhus, she wants Cyborg. I’m not saying she’s done after that, but that’s what motivates her.

“Katie Taylor is a legacy fight. When you look at the world, the only thing I can guarantee Katie Taylor if we can get Persoon over the line is, we can do it now. Can we do it in October or November? I don’t know. But I know we’ve got a slot in August. I think she’ll be up for it.”

[QUOTE=Buggy bear;20644128]yes , this is what makes the sport great when warriors do the sport proud by competing in 50/50 fights and there is not always a right and wrong in certain fights of which this is a great example…

[QUOTE=Phill lynott;20643841]Very well put and fair. I would agree completely if I honestly thought Taylor lost. However, I truly belive Taylor won that fight and by a wider margine than recieved. Too bad the final rd was so onesided. Anyway…

[QUOTE=Buggy bear;20642361]If taylor takes the persoon fight that goes some way to regaining respect from everybody that saw the 1st fight and thought she lost . I am no different and have gone on record to say persoon beats her…

Persoon needs to stop her to win. She aint getting no decision she needs to do a fury game plan, work on strength and power and push the fight from round one. Break taylor done round by round till she…

[QUOTE=REDEEMER;20642942]People are talking how many thought Persoon won the first one , many people were hearing how Serrano was considering retiring before Hearn offered the fight and paid expenses forwarded to her to train for it . We can debate…