Islam was 2-0, 1 KO, this year, and was rated #2 by the WBA (#1 spot belonging to the WBA interim champion Brianc Carlos Castano), #3 by the IBF and #7 by the WBO. Cook, 31, was also high-ranked by three of four sanctioning bodies, being put at #5 by the IBF and WBA, and #13 by the WBO. His biggest win was a scandalous stoppage of fellow compatriot Steven Butler this January.

Cook was brave enough trying to bring some heat to the local favorite. Islam was smiling, and there was some danger behind his smiles - he was just looking for a proper moment to fire with thunder. Canadian's jab was sharp and allowed him to redden Islam's face but Kanat's punches did more damage. A load of eaten punches began to take toll on Cook in round three. Right before the bell, Cook opened up for a right hand to the spleen and immediately ate a major counter right hand, which put him down. He was lucky to be saved by the bell.

In round four, Islam tried to stop the Canadian right away but some of his punches were a bit low, prompting referee Mikael Hook of Sweden to deduct a pint from Islam. In the fifth, the Kazakh bomber continued his battering of Cook, and finally dropped him down - now with a major left at the corner. The Canadian also had some mild success, opening a cut at the side of Islam's left eye. The action fight continued into the sixth but this time it was Cook, who did some damage to Islam and forced him onto the defensive. The Canadian was mostly hunting Islam's face while the Kazakh was targeting Cook's body. The seventh was also even, which came as a surprise given a poundage received by the Canadian.

In the eighth, Islam once again fired with conviction. He increased his tempo, finally landing a major right hand, flooring Cook for the third time. Somehow, the Canadian survived but not for long. At the start of the ninth, Kanat marched forward, landed several blows, and made the referee to halt action for good. Islam improves his record to 25-0, 20 KOs, retaining his WBO NABO and WBA Intercontinental light middleweight titles in process. Cook is expected to be named WBA mandatory challenger and to acquire a vacant #2 spot in the IBF ranks after this fight. 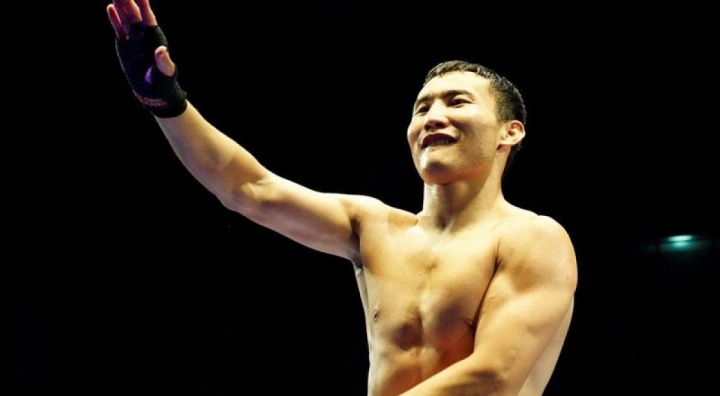 WBA #10 and IBF #12 welterweight Zhankosh Turarov (22-0, 15 KOs) didn't look his best in a ten-round fight against Argentinean import Bruno Leonardo Romay (21-5, 18 KOs) but got his job done with a unanimous decision, which was wider than scores reflected: 97-93 (thrice) - for the Kazakh fighter.

Turarov was playing an aggressor, and Romay was a prey for almost entire fight. The Kazakh threw and landed many hard blows but it seems like something was missing, and quite possibly it was some inner fire that should have driven Turarov. Romay stayed put, did his best to retaliate but his swollen face told the story better than some noise produced by his missed punches. The fight was fought within the same tempo for all ten rounds. BoxingScene had it 99-91 - for Turarov.

Local crowd roared when Zhanibek Alimkhanuly (2-0, 1 KOs) entered the ring for his fight versus Brazilian veteran Gilberto Pereira dos Santos (14-6, 10 KOs) but was more silent when the final verdict was announced: a one-sided unanimous decision with identical scores: 60-54 x3 - for Alimkhanuly, 24.

Spectators expected more from the 2013 amateur world champion and 2016 Rio Olympics quarterfinalist but dos Santos, who was stopped just once before by Malcolm McCallister, displayed granite chin and character not to wilt under heavy fire of the Kazakh in the first three rounds. The second half of the fight was calmer as both fighters did little to thrill the crowd. Alimkhanuly was fighting for the first time, almost a year since his pro debut.

In a battle of undefeated heavyweight kayo artists, local puncher Ruslan Myrsatayev (4-0, 4 KOs) dropped Argentinean Andres Mattias Afranllie (5-1, 5 KOs) in the second round, then battered him for two more rounds and finally dropped Afranllie down with righ-left combo to get the job done at 1:40 of he fourth and final round.

Light middleweight Nursultan Zhanabayev (3-0, 2 KOs) made a quick work of overmatched Brazilian veteran Alex Sandro De Jesus Duarte (13-2-1, 10 KOs). Duarte was dropped several seconds into the fight. Zhanabayev continued to pummel Duarte after that even though the Brazilian tried (but struggled) to mount a mild comeback. During the third minute of the openening round Zhanabayev landed a perfect left hand that put Duarte down. The Brazilian got up but was too wobbly to continue, meaning the first-round kayo loss.

Light heavyweight power-hitter Ali Akhmedov (9-0, 7 KOs) continued his rise with yet another stoppage. Akhmedov, 22, was just 76 seconds shy of going a full eight-round distance against Baton Rouge native Justin Thomas but was able to get the job done before the final bell.

Thomas, 33, looked for a survival since the opening round. He engaged in some warfare early on but then mostly relied on holding, ducking, complaining and other marginal tricks to by himself some extra time. Thomas was down four times in the second without any visible punches - all were ruled slips by referee Yuri Koptsev - but finally was decked with a legal blow at the end of the stanza. Thomas continued to fight for dear life for the next two rounds, Akhmedov clearly dominating the show.

The pattern changed a bit in the sixth round when Akhmedov showed sign of fatigue. The American fighter tried a brief turnaround but found only limited success in the fifth round. Akhmedov got back to work and dropped Thomas twice more in the sixth but both knockdowns were relatively light. The Kazakh boxer further increased his pressure and dominated the next five minutes. Finally, Thomas (18-3, 7 KOs) ate another hard combo, forcing the referee to call it off midst into the eighth.

---------------
Following a one-sided blowout in Moscow (from the hands of former WBA champion Fedor Chudinov) Argentinean journeyman Jonathan Geronimo Barbadillo (17-5, 14 KOs) was now destroyed in one by hard-hitting Kazakh middleweight Aidos Yerbossynuly (7-0, 6 KOs). Yerbossynuly dropped Barbadillo twice - both times with hard right hands - and continued destruction of his opponent, when the Argentinean corner threw in a towel.

Shymkent-born, New York-based Dinmukhammed "Dimash" Niyazov (12-0-3, 5 KOs) celebrated his homecoming with a workmanlike decision over Brazilian kayo artist Eduardo Pereira "Dinamita" do Reis (22-5, 18 KOs). Pereira dos Reis was aggressive but lacked precision, and his punches weren't as telling as his record is. Niyazov was careful and economic, throwing only enough punches to be a notch more successful than his opponent. It was enough to earn him a unanimous decision - 60-54, 59-55, and 59-55 - but it wasn't enough to impress anyone.

---------------
Oxnard-based 24-year middleweight Meirim Nursultanov (4-0, 3 KOs) easily vaporized Brazilian veteran Ismael Bueno (15-7, 10 KOs) in less than thirty seconds. Nursultanov landed several punches, which had Bueno reeling and then falling through the ropes and off the ring. The referee reached the count of twenty before the Brazilian was able to get back to the ring.

It was a big step-up for the previously unbeaten Brandon Cook. He gave a good effort, fighting bravely in defeat. Islam gets the win, but Cook probably gets more out of the losing experience in the form of extra seasoning.…

Kanat Islam is already 32. He will never get better. Now he is B level fighter. He gets tired too early. Very sad. We won't see him againt top boxers right now.

Kanat Islam the greatest fighter to come out of Kazakhstan