Kameda To Rey Vargas: You Are a Proud Mexican? Fight Like One!

Tomoki Kameda adapted quickly to Mexican culture in and out of the ring that he’s spent nearly half of his life known as El Mexicanito.

The literal translation is the ‘The Little Mexican’, though there isn’t anything small about Kameda’s accomplishments throughout his boxing lifetime, pro or amateur. The youngest of Japan’s most notable fighting family, he looks to join older brothers Koki and Daiki as multi-division titlists in the pro ranks as he challenges unbeaten 122-pound titlist Rey Vargas this Saturday live on DAZN from Dignity Health Sports Park in Carson, Calif.

“I’m very excited to be fighting here in the United States, especially here in Los Angeles where there is a huge population of Mexican and Japanese boxing fans,” Kameda (36-2, 20KOs), who turns 28 on Friday, said during Thursday’s final pre-fight press conference. “I’ve been preparing for this fight for the past four months.” 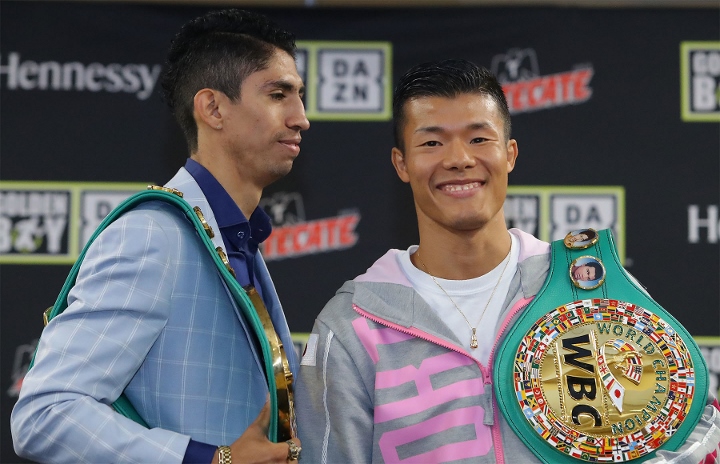 Kameda has actually spent more time in Mexico—to where he relocated at age 15—than has in his native Japan, though all of his biggest moments to date have taken place in Asia. He helped put his family in the Guinness Book of World Records following a 12-round win over Paulus Ambunda in Aug. 2013, claiming the bantamweight title in marking the first time in history three brothers all won major titles in the pro ranks.

The Kamedas added a second record just one month later, with middle brother Daiki becoming a two-division titlist in claiming a super flyweight belt. He joined Tomoki and oldest brother Koki—both of whom held bantamweight titles—in a feat that will likely never be matched, as three brother simultaneously enjoyed title reigns.

Tomoki’s reign ran for nearly two years, ending with a whimper as he was stripped of his title for entering a May 2015 bout with WBA secondary title claimant Jamie McDonnell, which was discouraged by the WBO whose belt Kameda held at the time.

It rendered moot, as he suffered his first career loss in dropping a highly questionable 12-round decision. As much occurred in their rematch just four months later, having since won five straight including a 12-round win over Abigail Medina last November to claim a secondary title at super bantamweight.

He now gets to fight for the real thing versus Mexico’s Vargas (33-0, 22KOs), whom has held a super bantamweight title for more than two years and is generally regarded as the best 122-pound boxer in the world today. With a win on Saturday, Kameda will allow his family to enjoy a third record-breaking moment, the first-ever trio of brothers to all enjoy title reigns in multiple weight divisions (Koki in three, Daiki in two).

Before all that, though, all that the youngest fighting Kameda asks for is a fight that the fans remember. It’s how he managed to earn the respect of his adopted countryman in Mexico—and is prepared to represent the boxing-rich nation even against one of its own.

“I respect all opponents, including Rey Vargas,” insists Kameda, who looks to avenge an amateur loss from 2007 while also seeking to become a two-division titlist. “All that I ask, you claim you’re a champion and you are a proud Mexican, right? Well, then fight like a proud Mexican champion (on Saturday).”

[QUOTE=whoseyourdaddy;19895254]Out of the three Kameda brothers, Koki is the most polished one, like you guys mentioned This kid is well rounded and has high IQ. in my opinion he should've had that bout vs McDonell he got screwed in the…

[QUOTE=DuckAdonis;19895590]Kameda is capable of hurting Vargas[/QUOTE] They are evenly matched up so definitely Kameda can catch Vargas. Vargas is not that good.

[QUOTE=Griever0730;19894935]VERY marketable being Japanese in the Mexican market. Both ethnicities have very passionate fanbases for their guys & even though he seems more of a Mexican that looks Japanese, if he pulls this one off he might be able to…

Nothing fake about Kameda. Dude came to Mexico as a 15 year old kid. Practically Mexican. May the best man win.

this is a damn good fight :boxing: Kameda is legit, Vargas is huge and long but I still don't trust his whiskers. He's been hurt multiple times in last few fights and was dropped in last fight. You throw in…