PROVIDENCE, R.I.—After being given all that he could handle in his last fight, Kal Yafai was able to escape his title defense versus Norbelto Jimenez with a much clearer victory.

The unbeaten Brit won by scores of 119-107, 118-108 and 117-109 in their DAZN-streamed super flyweight title fight, although Yafai was forced to deal with a cut for the first time in his career along with a punctured ear drum.

It paled in comparison to his surroundings versus Dominican Republic’s Jimenez in a New England region loaded with his countrymen. 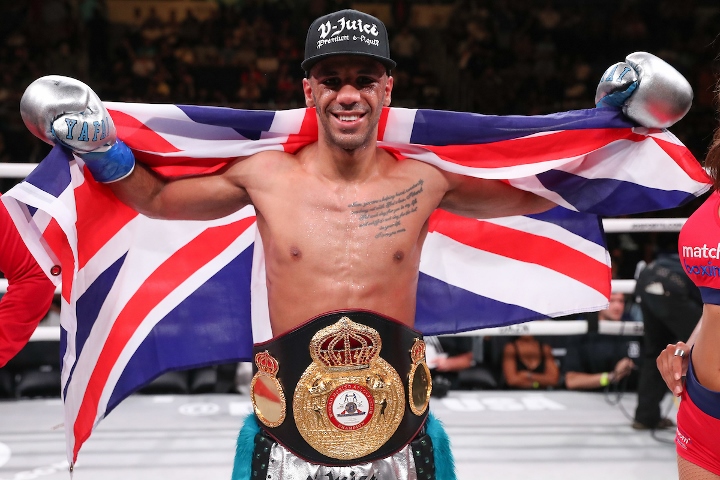 “It wasn’t easy, fighting in front of a very hostile crowd,” Yafai (26-0, 15KOs) said after his 5th successful title defense. “I have a bone to pick with Eddie Hearn, my promotor, he put my fight in the United States for the second time. I am fighting in Providence, but little did I know that it is full of Dominicans!”

For his promoter’s penance, the winner and still England’s long-reigning titlist is expecting a big fight lined up for his next adventure.

“It’s all good. I won easily, now on to the big fight,” noted Yafai before calling out the division’s big guns. “I want (current World champion Juan Francisco) Estrada, (former champ Srisaket Sor) Rungvisai, Chocolatito (former four-division champ Roman Gonzalez). Those kinds of guys have to be next.”

There remains the tricky matter of navigating around his mandatory challenger, Australia’s unbeaten Andrew Moloney who doesn’t have any intention of stepping aside.

Such a fight would seemingly be destined to go to a purse bid hearing, as Moloney and his twin brother—current bantamweight contender Jason Moloney—recently signed with Top Rank and ESPN. Yafai fights for DAZN under Eddie Hearn’s Matchroom Boxing, which recently brought Estrada into the fold.

The reigning World champion from Mexico is due to make his DAZN debut on August 24 against an opponent to be determined. A fall fight with the lineal champ would give Yafai time to heal his assortment of wounds sustained in Saturday’s contest—although a shot against anyone at the top of the super flyweight division will do.

Lafy better make it a big payday. It will be his last fight when he ventures into the real lions den of the flyweight division. No disrespect to Jimenez. He was overmatched but made a fight out of it.

He'd probably get chinned by any of the top 8.

[QUOTE=thecomedian2;19870089]Yeah, his last name sound muslim, he must have a weak jaw too.[/QUOTE] yeah he is Mooslum

Estrada is at the top of all these fighters.